Chiharu Shiota finds solace in places of worship. In Berlin, she filled the city’s oldest church with pages from the Bible and last year she installed a whirlwind of red wool in Le Havre’s Église Saint-Joseph. Now, she has consumed the old chapel at Yorkshire Sculpture Park in an enormous web, as if a divine spider has paid a visit. She has used her signature weaving process to suspend pages from a musical score with white, woollen thread to produce this installation, titled Beyond Time. “It is very peaceful here,” she says, in a soft whisper befitting the formerly religious space. “When I was invited to visit the park for the first time, I instantly knew that this was where I wanted to make my work.”

“The piano had lost all its function, but it was even more beautiful than ever before”

The score itself was discovered when the eighteenth-century chapel went under renovation and alludes to the building’s long history. It has been a place of worship and ceremony, a studio for Bretton Hall students (back when the college occupied the park) and now, a gallery space. Although the sheet music was written as a bell peal for a special commemoration, Shiota used it as a starting point to think about the important function of music within the venue. She was intrigued by the now-absent organ that once played a crucial role and decided to commemorate the instrument with a sculpture of a piano.

Much like a line drawing, the black, metal rods that form this sculpture sketch the familiar outlines of pedals and keys, but the mind fills in the negative space. This piece that was made off-site, in Berlin, and functions as something of an anchor for the flurry of white threads that emanate from it. Shiota has experimented with the piano motif regularly, as seen at Art Basel in 2013 when she wrapped a charred concert grand in layers of thread. She explains that her preoccupation is informed by witnessing a neighbour’s house fire back in Japan when she was nine years old. In the smouldering debris, she saw the remnants of their piano: “It was standing in the corner between all the other traces of their ordinary life that had been taken from them by the fire… I remember it all very clearly. The piano had lost all its function, but it was even more beautiful than ever before.”

Beauty is certainly at the forefront of this installation. The organic nature of the enormous woven structure is almost mystical. When questioned about the planning process, Shiota is non-plussed. “It happens organically, I just start weaving,” she says. The installation took twelve days to complete, with a handful of assistants, but there is still a sense that this is a personal, meditative project and––to an untrained eye at least–– it seems relatively spontaneous. Each taught line marries together to create fluid arcs which recall a vaulted ceiling, or more natural phenomena such as woodland canopies. It seems like the whole thing would be impossible to unravel.

Perhaps one of the most exciting principles of Beyond Time is the fact that it seems to embody stillness and movement simultaneously. Images of the work appear like a still from a film, as if a snowy explosion has erupted within the chapel walls. In person, there are flickers of this sensibility, but each suspended page and single thread seems to call for quiet contemplation, not as if they have been frozen in time, but rather that they have existed in this space for eons, and we have only just discovered them.

Fortunately, the Yorkshire weather also lends itself brilliantly to this piece. As the sky moves from dense cloud to full sunlight (visible through double-height windows) the shadows change, and the astonishing whiteness of the paper and yarn is highlighted or flattened. Shiota views her installations as drawings in space, but the fact is that a work like this offers so much more than simply occupying the third dimension. It seems to live and breathe in the venue and emanates a strange spirituality that is entirely befitting of a deconsecrated chapel nestled in a park filled with some of the world’s finest sculpture. Shiota says she is flattered to exhibit in a space with such history and an international reputation, but she is far too modest to engage in conversation about how her works fits with the wider scope of the park. Once again, she offers a simple statement that alludes to her fundamental intentions. “I make music with my art, but you cannot hear it.”

Until 2 September 2018 at Yorkshire Sculpture Park 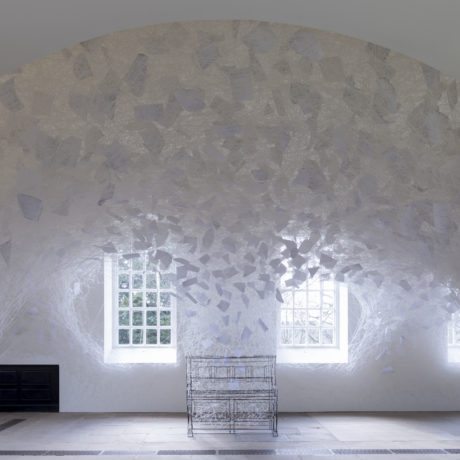