Our favourite tool is one we made ourselves. We call it “the potato”, or sometimes “the thought potato” which perhaps better describes its function—it’s a potato that helps you think. As two artists working together much of our work comes out of an ongoing conversation about ideas and how they might function in the world. But sometimes that conversation gets a bit stuck and that’s where the potato comes in.

You use it by walking around the room, throwing it to one another as you talk. It’s the fiendish construction of the potato which makes this a worthwhile thing to do. It’s built from a heavy liquid core (one half bottle of black metallic paint) around which are tightly wrapped a pair of ladies stockings covered with a gingham rag. The whole assemblage is held together by multiple layers of masking tape.

With its heft, thudding impact and unpredictable spin, the potato is the perfect tool for liberating lateral thinking, a way to access other impressions through getting lost in the satisfaction of your own and its movement. It’s played a part in many works we’ve made in the last couple of years, most notably a piece we made called Six White Horses. Everyone should have one. 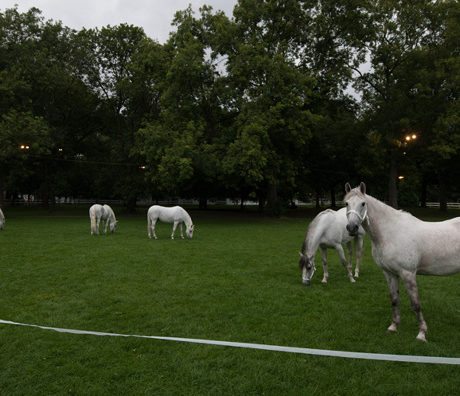