Museums used to be great halls of certain knowledge, well-dusted vitrines containing precious artifacts that proved the origins of civilization and the evolution of mankind. As the great, late Stephen Hawking put it, “the greatest enemy of knowledge is not ignorance, it is the illusion of knowledge.” In our post-colonial, post-truth environment, museums are no longer a place of certainty but a place to contemplating how much we really know about the history we’ve been told. When the ruins of the Gobekli Tepe tribe’s temple were discovered in Turkey in the 1960s, for example, proving humans built places of worship in 9,500 BCE our idea of history and social evolution was turned upside down. As more hidden stories and forgotten ancestors are discovered, so is our image of where we came from. All of these things are exciting fodder for the genderless, nationless artist Pakal (the alter-ego of a better-known, but unveiled artist) whose debut London solo exhibition mixes influences from indigenous art from Native America and the Far East and American outsider art to create the visual language of a mysterious tribe who belong everywhere and nowhere. Everyone will recognize something in each intricately detailed paintings, presented alongside instruments, personal objects, ritual items and costumes (made in collaboration with Alessia de Pasquale). A ceremonial performance will take place at the opening on Wednesday evening to initiate the tribe to its temporary home at the Saatchi gallery.

Who is Pakal and why is it important that we know little about you?

Pakal is the king of an unknown, forgotten civilization called the Laka. It is also an anonymous artistic alter-ego. Pakal’s gender, language, religion and race are not revealed to the public, and free of borders and boundaries, hopefully, the artwork can speak for itself without imposing questions about the identity and psychology of the maker.

Your solo exhibition at the Saatchi gallery is called The Missing Museum. How did you conceive the idea of the show?

The Missing Museum is the found museum of Pakal’s civilization and their life story. It tells Pakal’s story through artwork, sculptures and artifacts, supposedly left behind by Pakal and his people. Each object has its own narrative, but together they give a sense of the tribe as a whole: their philosophy, their nomadic lifestyle, their daily life, etc. The viewer doesn’t know if this “museum” is real or not, but that doesn’t make it any less authentic.

Do you mean that we shouldn’t trust human history as we know it?

Not exactly. But at the same time, history is only information written by humans. Like all information that comes at us thick and fast, we must absorb it and then evaluate it. Remembering that we can all be ignorant at times is vital.

“History is only information written by humans”

Can you tell me more about the costumes and ritual objects that are on display?

Some of the objects are Pakal’s personal belongings: shoes and suitcases, boxes with personal items. Some belong to the tribe. The fertility instrument belongs to their partner. It’s an instrument that has been consecrated to help deliver newborn children to the tribe. There are also the costumes of the guards, they are his protectors and allies. They’re a very important part of the tribe and that is why they feature frequently in the artwork.

Why do you think humans have such a strong desire to know where they came from?

I cannot speak for the others but I do think we all wish for a sense of belonging, consciously or subconsciously. To know that we are not alone in our journey. 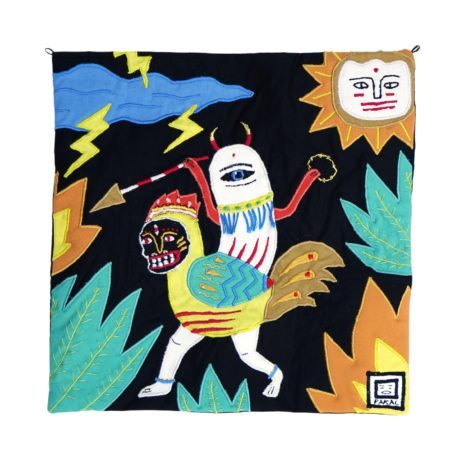