“In the morning I can’t wake up, in the afternoon I am bored, in the evening I am tired and at night I can’t sleep.” These words begin Guido van der Werve’s 2003 work Nummer Twee: Just Because I’m Standing Here Doesn’t Mean I Want To. The Dutch artist then walks backwards into the path of a moving car, before ballerinas alight from an ambulance and dance to Baroque music in front of his crumpled body.

It might as well be a mantra for Van der Werve’s work since: interdisciplinary video and performance art in which he has restlessly composed and performed his own orchestral music, travelled the world, built rockets and undergone feats of immense physical endurance. “I’ve always been active and liked to do everything,” he says to me. He has stood at the geographical north pole for twenty-four hours. He has walked across the frozen Baltic Sea as an icebreaker follows in his wake. This one is both terrifying and sombre to watch.

“My brother and father were both painters,” he tells me. “But I was never so much interested in painting or drawing. I grew up playing a lot of piano, and later electric guitar in a band. After high school I tried to figure out what I should do. I wanted to build things so I studied industrial design, but it wasn’t creative enough so I enrolled at art school. I tried performance art and had always liked to act. I also missed the directness of music. And because I didn’t like to do my performances live, and again and again, I started to get a crew to film them.”

“Maybe that was born into me, the need to compete.”

For 2012’s Nummer Vierteen: Home, which won the Grand Prix at the Netherlands Film Festival the following year, he did the equivalent of roughly seven Ironman triathlons from the Church of the Holy Cross in Warsaw, where composer Frederic Chopin’s heart was interred, to Père Lachaise in Paris, where his body was buried.

“When I was a child my parents skied a lot,” he says. “I started when I was very young. I was in a team in Holland, did the Dutch Championship. Maybe that was born into me, the need to compete. I signed up for my first marathon as a joke but then I didn’t have such a good time, so took it seriously and trained. I got faster. But then after that I thought, what do I do now?”

Van der Werve intersperses his physical journey with a narrative about Chopin’s involuntary exile from Poland, Alexander the Great’s never making it home after conquering most of the world and scenes set in the same unremarkable Dutch suburb in which the artist himself was born and got hit by that car. He walks through his street on fire, is suspended above it by a crane and blows the windows out of his childhood home. During all this, an orchestra plays his hour-long twelve-movement work. The whole thing is incredibly moving—sad, impressive and strangely cathartic—to behold.

Home is currently being shown as part of Melancholia: A Sebald Variation: a subtle intertextual exhibition currently at Somerset House, inspired by the German writer WG Sebald who incorporated images into his experimental texts that traversed disciplines. Unable to perform the requisite amount of Ironman triathlons to get me from London to the artist’s home in Berlin, I talk to him over Skype. And as he speaks of all the forms his work takes—in opposition the deadpan persona he adopts for his pieces—his face is never without a smile, laugh or deep, visible interest. He returns again and again to wanting to “do everything” himself, and the idea of creating a “Gesamtkunstwerk”. This phrase, meaning a total work of art, was coined by the composer Richard Wagner who wrote the music, the words and designed the sets for his operas.

“I always thought as an artist, it’s a Gesamtkunstwerk: so you should do as much as possible yourself. It’s your language.”

But the grandeur of Van der Werve’s work always feels rooted in the humdrum and absurd, as well as the melancholic. From the beginning there has been a sense of malaise and dissatisfaction, a Romantic-with-a-capital-R yearning for something finer than reality, which is then brought back to earth. It can feel reminiscent of Vic and Bob, or even very Trigger Happy TV, with its bathetic slapstick.

“I was living in St Petersburg on a university exchange,” he tells me. “A friend and I were looking out of a window onto an eight-lane highway when a guy tried to run over it and got hit by a car really hard. The driver stopped and came out; he was in shock. He picked up the guy and tried to make him stand up, but the guy was very dead, of course, and he just kind of…” The artist does an impression of the collapsing corpse. “We were in shock, too. Having just seen someone die, we thought, what are we going to do now? We went to the city and saw a ballet, which was free to us as students. So that will be the way I remember that day. I felt like all these things somehow made sense to me as an interesting narrative. That became Nummer Twee: the standard for the rest of my work because it was the first of my pieces I really liked.”

In an age where the likes of Damien Hirst and Jeff Koons happily outsource many aspects of their works to others, I ask him how important it is to delegate as little expression as possible. “Well a lot of artists work with other people,” he says, “and I work with a crew. But I always thought as an artist, it’s a Gesamtkunstwerk: so you should do as much as possible yourself. It’s your language. And if other people can do something better than you, maybe you should do something else. But I suppose I’ve always been a bit of a loner.”

Has he ever fallen short of his ambitions, and felt he should be the one to do something else? “I thought let’s climb Mount Everest. And then I climbed Aconcagua, in Argentina, as practice. I heard a lot of stories about how you go up a boy and come down a man. But I could barely breathe there and came down thinking, this is one of the most stupid things I’ve done in my life. I like mountains and nature: it’s nice to walk around and look at them. But to need to go blindly to the top? I felt it was a bit boyish. I am older now. The challenge has become, what do I want now? In my life I’d like to take advantage of my strengths and talents. It’s good to have peace with what you are good at.”

So what now? “In the past I never believed in political art. Art moves people but you can’t control the direction. Wagner inspired the Nazis, and Mark David Chapman said Catcher in the Rye inspired him to shoot John Lennon. But I thought, now’s the time to use my politics in a positive way. I’m also doing a performance in Amsterdam and writing the music, working with a choreographer who studied classical ballet in Poland. And how very positive to work with another person who has her own, different talent. Wanting to do everything yourself can only go to a certain point. It made me more mature to understand that you need other people to reach the next level with your work.” 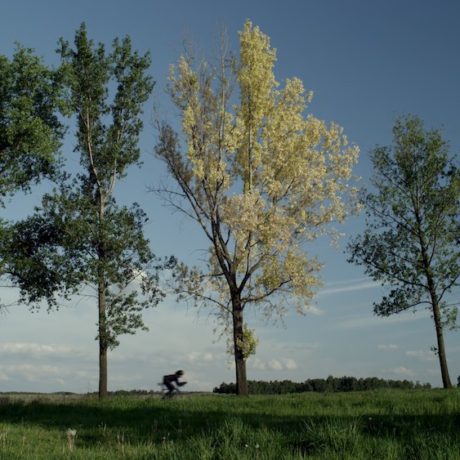