My conversation with French artist Dominique Gonzalez-Foerster opens in a discussion about the importance of an accurate vocabulary when it comes to her work. Subtle and indeterminate, her arrangements in space are relatively empty, sketchy, propositional, but are also calibrated and effective. They operate as a sort of autosuggestion, drawing viewers into their own predetermined yet open chains of associations and intersections. Scarcely filled with elements and objects, they are more a process, an experience, an event, an encounter, than a conventional form of an exhibition.

Your work is often identified with the work of Relational Aesthetics artists such as Rikrit Tiravanija and Philippe Parreno who practise art as a social structure, as a real-time social activity, rather than as production of objects. Is the concept of an exhibition still relevant to your work?

I still think in terms of an exhibition, and I think an exhibition is an amazing medium. As much as I reject words and categories such as installation, performance and video art, I still think that the notion of an exhibition as an audience-based medium is open enough and can still take us beyond the field of visual art into the field of real experience. Though it has its splendour rooted in the context of the late nineteenth century, the term “exhibition” can still refer to a space where one is able to walk around and make one’s own time in relation to different situations and moments; but what is really interesting to me in relation to the exhibition as a medium is that, unlike cinema or theatre, it is not time-based but audience-based. This is where I think that the exhibition as a medium is still very attractive since it produces a viewer who has the qualities that Walter Benjamin, following Baudelaire, attributed to the urban flâneur; a viewer who has the possibility of being inside and outside at the same time; who is not fixed to his or her seat, or to a single viewing point for a predetermined duration.

Within the historical narrative of your work 2016 can be considered a significant year. During 2016, 1887–2058, your non-linear, future-anticipating retrospective, occupied the Centre Pompidou in Paris, and K20, Kunstsammlung Nordrhein-Westfalen in Düsseldorf. The exhibition was organized as a circumferential collection of environments and rooms, each evoking, and to a certain degree actualizing, specific points in time between 1887 and 2058. At first glance it seemed as though the works on view were insubstantial, gestural outlines of periodical rooms, but as the viewer accumulated the different historical-cultural-artistic contexts and discourses suggested by each of them, the exhibition began resonating on an epic level as a peculiar form of Gesamtkunstwerk, a total work of art.

In my practice, there is a strong economy of signs, references, effects, forms of art. It is a genealogy of works that produce other works that produce other works, and so on. There is no limit to the amount of quotes, references and characters it includes. This limitlessness is expressed in many ways. For example, in the original display of Splendide Hotel in the Palacio de Cristal in Madrid in 2014, the Spanish writer Enrique Vila-Matas told me that he didn’t know where the work ended, if it was the sky, the birds or the glass structure in which it was displayed.

I like this blending of the art into the real, into historical reality. In the version of Splendide Hotel in Madrid there was a transparent room where objects appeared and disappeared in between the wooden rocking chairs that were scattered in it. Even though it was not announced, it was inspired by Arthur Rimbaud’s wish to expose himself publicly in one of the world exhibitions, which he expressed in a letter to his mother during his travels. In recent years I have explored the medium of the exhibition from the point of view of ephemerality and disappearance and not from that of permanence, presence and fixity, in order to undermine the notion of the eternal shape of the artwork and the idea that it only has one place.

“I like blurred situations. I am completely allergic to direct indication to the viewer”

The effect of each work catches the viewer by surprise. One suddenly finds oneself in a mental space, in an intersection between reality and imagination, actuality and history, here and there, without knowing how what is seen, or how the very few things that are seen induce the effect of an overlap, of elastic time-space.

I can understand your comment that my practice raises the question in regard to what exactly the viewer sees, what the work is, what it has and does, and how, on the one hand, it plays with the code of an exhibition or even a retrospective, but on the other, how it does so in an unstructured manner, which is parallel to the unstructured viewing experience the viewer is being led through.

The elements in your environments generate uncertainty. Their status and purpose are never clear. It is never clear whether they are there to be seen or to be used.

I like blurred situations. I am completely allergic to direct indication to the viewer, and to what many call activation of space. I let viewers build their own desire, choose to sit on the bed or not, enter this place or not. I provide a set of potentials and intentions. I try hard to become the viewer, to be in this position. But not one type of viewer. I don’t work for one viewer.

Your work relates to history as material. In 2008 you presented TH.2058 at Tate Modern. The work envisioned the world in 2058 during an endless flood, in reaction to which it transformed the museum’s Turbine Hall into a shelter for people and a storage place for artworks and other objects of culture, while filling the space with metal bunk beds, books and a giant single-channel projection of The Last Film, a video work composed of excerpts from cinematic dystopias. In addition, it occupied the space with replicas of iconic sculptures from the Tate collection, enlarged by 25 per cent. For K20, you slightly modified the work and manifested the passage of time from 2008 to 2016, by changing the title to TH.2066 and including replicas of other sculptures, enlarged by 35 per cent. Would you consider your work apocalyptic?

I never use the word apocalypse. Sometimes people mention this word and I always disagree. I perceive the shelters in Tate Modern and K20 as a story about the wish to preserve and value cultural achievements, more than a scenario of apocalypse and loss. As humans, we produced all these materials, sculptures, things, and we should decide whether it is a failure or whether there is something there we ought to keep. This is the reason I like Fitzcarraldo as a character, and find him very representative of the Anthropocene because he wants to build his opera in the jungle, and at the same time he is willing to move mountains and cut down thousands of trees. He shows the ambiguous human relation to the biotope versus culture.

You marked the end of 2016 with two exhibitions you opened almost simultaneously in November in Berlin. The first was a joint exhibition with Bless and Studio Manuel Raeder at Schinkel Pavillon entitled Costumes & Wishes for the 21st Century; the other was a solo exhibition at the Esther Schipper gallery entitled QM.15. Both exhibitions involved your stock of historical figures whom you re-enact as apparitions throughout your work, by means of projected performances, photographs or, as in the case of the exhibition at Schinkel Pavillon, by costumes. How would you distinguish these exhibitions from your earlier work?

The show at Schinkel is like a graph, with costumes placed in space like points in a graph. Some costumes represent characters from the nineteenth century and others from the twentieth century. The graph-like structure connects between the costumes and gathers the characters to discuss whether opera is possible in the twenty-first century. The costumes, the characters they represent and the work associated with these characters are like devices, and I use the word devices because I cannot think now of a better word, for travelling in time, for unfamiliar kinds of presence and existence. I am always fascinated by the capability of the artwork to constitute artificial life, by the Frankenstein aspect of the artwork, by its type of life.

This feature originally appeared in issue 31 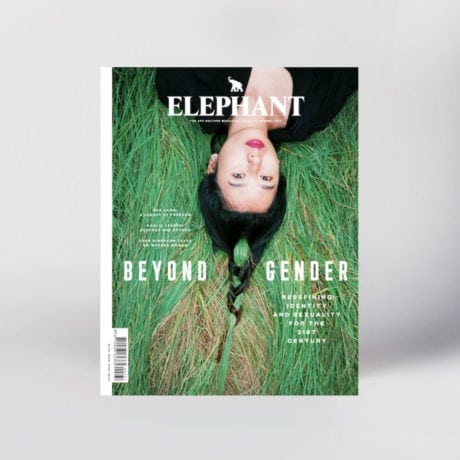