Her time working in theatrical set and costume design imbues Donna Huddleston’s delicate pieces with an intriguing sense of fantasy. The drawings she creates are intricate, formed from such faint lines that they appear to be almost transparent.

She collapses the boundary that exists between theatre and life, depicting glamorous characters in action and playing with scale. In Person, her new exhibition at Simon Lee Gallery, London, explores the idea of stand-ins and doubles, inspired by the films of Rainer Werner Fassbinder and Chantal Akerman.

The artist features in numerous scenes herself, seeing these less as self-portraits and more as a way of acting out different roles. She also draws eclectically from different time periods, introducing styling from the 1970s and 1980s and borrowing from Art Deco forms which in turn took their cues from ancient Egypt. The fake and the real, the authentic and the copy, are always up for debate in Huddleston’s complex works.

My plan drawers, for obvious reasons. They’re full of drawings, prints, sketches and thoughts. It’s great to go through and retrieve ideas from unresolved drawings, quick sketches… even failed drawings can hold a tiny seed of inspiration that says, “Keep going”.

“It’s great to retrieve ideas from unresolved drawings, quick sketches… even failed drawings can hold a tiny seed of inspiration”

I’m constantly running to the art store to buy single colour Caran D’ache Luminance pencils. This is the only colour pencil I use in my drawings: the pigments are amazing and you can mix and layer the colour. It’s the closest I come to painting.

Music is super important in my studio as my work is so slow and labour intensive. It helps me concentrate. Songs, musicians and albums somehow attach themselves to bodies of work. I play the same tracks over and over again. For my current exhibition I had the soundtrack to Annette on rotation, particularly the song Sympathy For the Abyss. It’s all so theatrical and over the top. I also became obsessed by the song Brighter! by Cas McCombs featuring the wonderful (late) actress Karen Black.

I could live happily ever after surrounded by a series of Eva Hesse’s machine drawings.

I can only answer this based on what I’m looking at right now. The three books that I’ve been referring to a lot in the studio are: This Is No Dream: Making Rosemary’s Baby, an incredible book of photographic stills by Bob Willoughby from the shoot during Roman Polanski’s 1968 film; Magritte: The Mystery of the Ordinary is always inspiring to look through when making work; and Teddy Girls, a photographic book of Ken Russell’s images of the 1950s subculture.

“Songs, musicians and albums somehow attach themselves to bodies of work. I play the same tracks over and over again”

Big extravaganzas, making opera, epic films… Or I’d settle for a fully equipped multi-disciplinary printing studio, so I could work fast when I wanted to.

I don’t really have any pet peeves. The art world is both a blessing and a curse.

The Getty in Los Angeles is like going up to heaven.

Listen to all the go-to songs picked by our 5 Minutes With artists here. 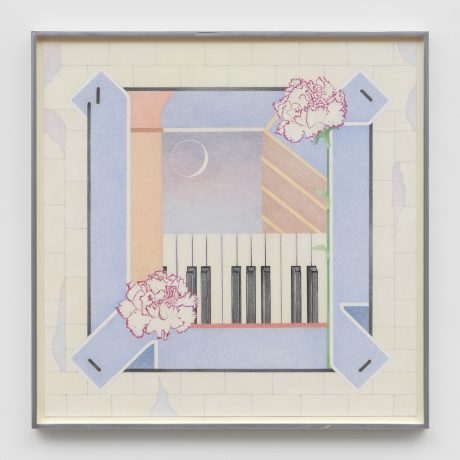