London-based painter Dickon Drury dreams up entire new worlds in his bold and colourful works. Each vision, whether an enviably picturesque artist’s studio, a snowy night or a simple still life, is loaded with allusions to the greats of art history, which often reveal themselves in small vignettes that exist within the picture plane. Drury’s heightened shadows, rugged brushwork and unabashed use of flamboyantly bright shades are reminiscent of Norwegian painter Nikolai Astrup, whose obsession with traditional rural life and folklore also share more than a passing similarity with the younger artist’s playful and fantastical treatment of everyday subjects.

Paloma Proudfoot creates sinister yet strangely alluring ceramic objects that border on the figurative, presenting them in carefully formulated installations that call to mind a stage set, or a surreal interior of an unknown home. Her curvaceous forms span a literal translation of a lace-up boot, to something resembling a pair of dismembered legs and violent pincers. There is a definite sense of crossing a threshold when you enter a space occupied with her works, which is accompanied by the unsettling notion that they might spring to life, catching you unawares.

Palestinian artist Hazem Harb reconfigures the tired clichés of his home country by reclaiming found photographs that represent unseen fragments of its history and reconfiguring them with bold slabs of colour and slivers of neon Perspex. These abstracted collages are designed to embody the fractures you might experience in a dream, or faded memories, but also represent Harb’s commitment to showing another side of a nation that has so long been defined by conflict alone.

Using a complex system of re-appropriation, Viktoria Binschtok questions the way we interact with digital information, search engines and wider visual language. She begins by selecting her own photographs and putting them through Google Images and searching through pages of “similar” visuals, according to the algorithm. She goes on to select a desired counterpart and conducts intense research to restage it in the real world. The result is a bizarre collage of disparate yet strangely comparable visions, which she then presents in a range of sculptural installations and wall-based layering, all of which have one foot and reality, and the other firmly within the digital realm.

In his site-specific installation Twelve Angry Men, Benjamin Heisenberg investigated the “imprinting and self-perception in German society” with a series of video works and historical artefacts, presenting something akin to discovering lost heirlooms in the family attic. His videos depict grainy images of disgruntled men discussing political issues and more personal concerns, while old luggage cases filled with archaic newspapers litter the floor. They are accompanied by a range of minute magnifying glasses, which appear like small autonomous beings, clawing through the artefacts for lost scraps of memory.

Until 30 September at Tempelhof, Berlin 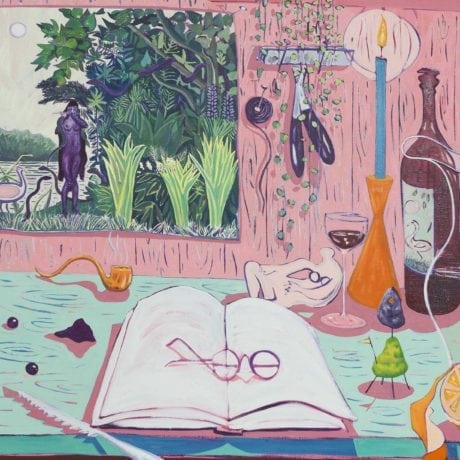