As an artist of indigenous Australian heritage, Brook Andrew has used his position as artistic director of the Biennale of Sydney to shine a light on the practices and creativity of communities and cultures that are often overlooked, misunderstood and oppressed. Titled Nirin, meaning “edge” in the language of the Wiradjuri people of western New South Wales, the city-wide exhibition brings together artists who celebrate and reflect upon their own heritage, as well as taking a wider view of how cultural history is told and reformed in contemporary contexts.

These include an incredible list of indigenous Australian practitioners, including the late Kunmanara Mumu Mike Williams, a renowned Pitjantjatjara artist, activist and ngangkari (traditional healer) who passed away in 2019. His vision for a major politically minded show at the Art Gallery of New South Wales has been executed by the Mimili Maku Arts collective­—which he founded—and focuses on proving that Tjukurpa (an all-encompassing belief system that includes law, morality and religion) is still a powerful force.

Meanwhile, Barbara McGrady, a Gamilaroi/Gomeroi Murri Yinah photojournalist, reviews her own immense photographic archives to consider how contemporary Aboriginal histories are told. Similarly, Nicholas Galanin (who is of Tlingit and Unangax̂ ancestry) considers the physical implications of the Captain Cook statue that resides in Sydney’s Hyde Park, by excavating the literal shadow that it casts.

“The Biennale brings together artists who reflect upon their own heritage, taking a wider view of how cultural history is told and reformed”

More community-centric enterprises include Tony Albert’s greenhouse, where visitors are encouraged to gather, share and write messages and memories on paper imbedded with Kangaroo Grass Seeds, all of which will form part of a revegetation project at Blacktown Native Institution, the earliest remaining site designed specifically to indoctrinate Aboriginal people into European customs. A programme of live events also encourages active participation in cultural exchange, including guided bushwalks and indigenous storytelling led by the likes of Aunty Deidre Martin and Darug artist and educator Chris Tobin. The newly virtual Biennale will bring the exhibition and programs to life through live content, virtual walk-throughs, podcasts, interactive Q&As, curated tours and artist takeovers.

The importance of realigning female-centric cultural erasure is also explored by Mayunkiki, a Hokkaido-born artist and musician who seeks to uphold indigenous Ainu traditions that have been quashed and even outlawed, in the case of women’s facial tattooing. Māori painter Emily Karaka also celebrates indigenous visual expression in works that consider land rights and environmental issues, particularly the Treaty of Waitangi.

In further explorations of collective working and enterprise, expect to see installations by Ghanaian artist Ibrahim Mahama. His interest in the connection between object, labour and community is presented through an enormous sculptural presentation of coal sacks, which consider the supply and demand of African markets, and a dense display of rolled-up fabric and wood medical stretchers, which were reclaimed from a scrapyard in Athens. 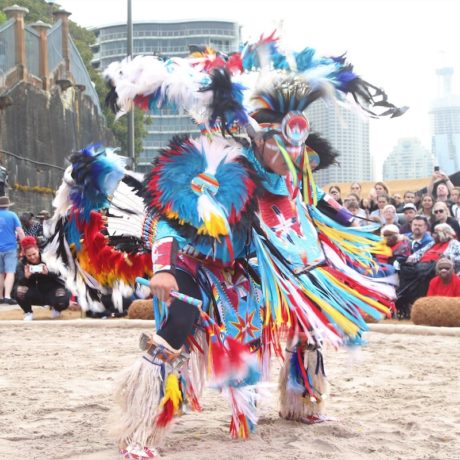