In Victoria Miro’s Wharf Road space, Jorge Pardo walks me around his freshly mounted eponymous exhibition hours before opening. He has decided to leave the hoists from the process in place. “It’s a funny little game about how they are integrated into the space. They’re suspended, but they are also suspended as the type of objects that they are.” Gregarious and unguardedly intellectual with a Starbucks in hand, he returns again and again to this idea of games and problems; ideas that are hard to square. He believes, too, that for work to be powerful, the artist sometimes ought to be as confused as the viewer.

Born in 1963 in Cuba and raised in the US, Pardo is the recipient of a Macarthur Fellowship, informally known as a “genius grant”. Currently living between New York and Mexico, he has also lived in the overlap between art and life. His work straddles conceptual art and interior design. He has built and decorated houses for collectors, and in 1993 the Museum of Contemporary Art, Los Angeles commissioned 4166 Sea View Lane: a house intended as a walk-in sculpture. “I’d been reading a lot about architecture at the time, and said, ‘What I want to do is make a house.’ They asked if I’d put it in the gallery and I said ‘No, I want the house to be in a neighbourhood, and I want the gesture of my project to bring all these problems into how an institution manages that kind of object.’ It’s interesting because it is unmanageable. A museum gets a work, and they have an infrastructure that starts when it comes off the truck. Museums don’t normally have to figure out what to do with a house that an artist made, who is not an architect, that’s in the world. But they had to figure out how to make that palpable and visual.” Then he moved in. Was this the idea all along? “I told them I’d like to make a house, and I’d like to keep the house when I’m done and live in it. People on the board said, ‘We’re not paying for an artist’s house.’ It took years to get it approved.”

A decade later in 2008 he had an in-gallery MoCA show; he split the exhibition space into rooms. The walls were covered in large, panoramic photographic snaps of the views within and outside a home he had designed in Puerto Rico. It was populated by a mix of furniture from his house as well as artworks from his studio and from various points throughout his career. Some of the furniture functioned as furniture. Some just looked like it did. It was called House.

On the bottom floor of Victoria Miro, a small forklift takes up the middle of the room. Was he tempted to leave that there, as he did with the hoists? “Maybe I should have. I do think they’re similar things, but they are more impromptu than that.” Around the walls are images of Chinese screens that have been photographed, then turned into perforated wooden sculptures on a CNC laser-cutting machine, then painted by hand. “These things are images of things that exist. They’re physical.”

Light penetrates the picture plane and plays against the wall. This is another one of Pardo’s motifs. In 2015 he had an exhibition of what he called “people lamps” at the Petzel Gallery in New York: life-size plastic exoskeletons of humans, illuminated by a lightbulb. He has used laser-cut chandeliers as decoration in his houses. The upper floor of this gallery is laden with these plastic anemones of suspended light.

“One of my favourite things about work from the sixites was how ordinary things could become fictionalized when you exhibited them. These are things that will probably end up in somebody’s home or not. But when you make an exhibition out of them, they have the potential to stop being lamps, stop being what they are, and start to refer to things that are not them. They’re not lamps,” he laughs. Pardo laughs a lot. “They’re actually fucking artworks. They’re in a fucking exhibition, they were planned to be exhibited. They were not planned to go to a shop and be serialized. So these things have a fictive quality to them.”

“The works make light, which makes shapes. If you play with them long enough you can get different things to happen”

I point out the other thing which people say about Pardo’s work: the idea of dual purpose. His work might not be meant to be sold in a shop. But isn’t it also meant to be a functional lamp, as well as a sculpture? “Absolutely. But the fact it is a lamp is an incidental.”

Writers have previously wanted to assign egalitarian motives to the work, as well as utilitarian ones. The dissolution of boundaries between high art, craft and design. Does he see any value in distinctions? “I think what’s interesting about this is it’s an impossible task. It’s easy to fall back on hippy attitudes of ‘We’re all in it together.’ I don’t necessarily believe that there’s any idealism in turning them into the same thing. I think they do it anyway. But then, the differences in these fields are sustained by every pedagogical institution that’s worth anything. It’s always an operation of both. It’s a problem. It’s an artwork, but it’s a lamp and it’s cool.”

Speaking to him, you get a certain irreverence that is visible in the work. I tell him this. “There is. I mean, it’s made for me to look at.” We laugh again. So there’s really nothing political in his approach? “No. I don’t think double duty or purpose as a concept is that interesting. But I think phenomenology is. The works make light, which makes shapes. If you play with them long enough you can get different things to happen. They’re like drawings. As it gets darker here it gets crazier.” The roof of the gallery is exposed: beamed glass, visible sky. It could almost be a Pardo work, the outside world affecting it, as it simultaneously seeps out into the world.

In 4166 Sea View Lane, visitors were greeted by a large print of Velazquez’s Las Meninas: part of the decoration. I ask him about this painting, which spills out its confines into the room and through to another dimension at the furthest point, including an image of the artist himself painting. “I make works you have to walk around and through, while at the same time processing through images,” he says. “That work is one of the first that really implicates pictures in that problem. You are the centre, structuring its logic. It’s about getting lost: is the fucker painting me, or is he painting that? It’s a very simple device that I use all the time. You come into the house and you realize, this is not really a house. This experience of this thing—this object that you’re in—is really a construct of you.” By the end of our conversation, what Pardo said would happen has taken place. The quality of the room has changed. The light artworks that the lamps produce around the gallery floor and walls, and against each other, have changed. Yellowish London winter twilight had turned the gallery into something much crazier.

Showing at Victoria Miro until March 24 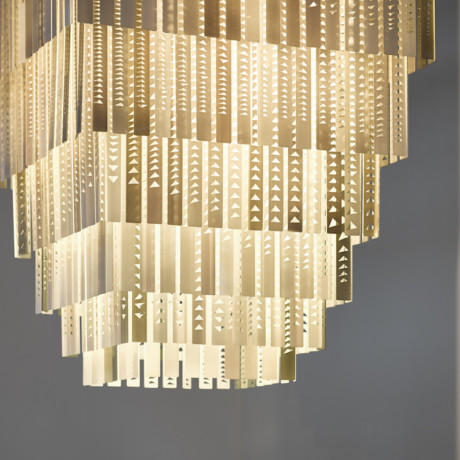