After a mild fall in New York, winter has fully arrived and the temperature has dropped. Walking around the Upper East Side, the air is perfumed by spruce, pine and fir trees from Christmas tree vendors out on the sidewalks. On a recent afternoon, I had a coffee at E.A.T. by Eli Zabar (where panettone is also in season) on Madison Avenue, near Museum Mile. A friend met me and we walked in the crisp outdoors over to the Metropolitan Museum of Art, which is currently showing a blockbuster exhibition, Michelangelo: Divine Draftsman and Designer, featuring drawings by the Renaissance master. The show also includes contextualizing work and a drawing in which he worked over a piece by his students.

The show was packed, overflowing with people in the dim light, making it hard to see some of the very fine and light lead-point drawings that comprise much of the exhibition. There’s one supreme painting, Michelangelo’s The Torment of St. Anthony (ca. 1487–1488), which he made when he was just a kid—approximately twelve years old. The architectural drawings are really superb, and so too are some of the seemingly offhand portrait studies. The curatorial decisions, though, can be confusing at times, such as the inclusion of a large LED screen held overhead in one gallery, displaying an image of the Sistine Chapel’s ceiling. With the building’s vaults shown on a flat surface, it can be hard to see much of the periphery, which is warped and skewed, smooshed into the rectangular frame. Additionally, some painted copies—in particular, a small rendition of the Sistine Chapel’s The Last Judgement by Marcello Venusti—lack Michelangelo’s vibrancy, but, at least in the case of Venusti, preserve an image that was later censored by Pope Pius IV in 1565. Nonetheless, the show has a lot to see and would be well worth revisiting. It will not be travelling and may be the only opportunity to appreciate many of these artworks.

Other influential Italians are on view nearby, at Lévy Gorvy on Madison at 73rd, with a great survey of Arte Povera from the collection of Ileana Sonnabend, the art dealer who largely introduced the movement to American audiences. The exhibition is curated by Germano Celant (who coined the Arte Povera’s name) and follows on a similar show at Hauser & Wirth’s 22nd Street location in September and October. In fact, an untitled 1968 sculpture by Giovanni Anselmo, made of granite and lettuce held together with a copper wire, on view at Lévy Gorvy, was seen in a preparatory sketch shown at Hauser & Wirth. And considering how much of contemporary art draws on this work, perhaps often indirectly, such as Paul Pascal Theriault’s sculptures made of cigarette packaging and wire, now at James Fuentes on the Lower East Side, such surveys seem like a good starting point to thinking about how aesthetic strategies can develop over time and cultures.

New York’s bitter winter chill hasn’t fully descended yet, so afterwards I biked downtown. The city provides a bike rental service with locations all over, or the 6 train to the Broadway-Lafayette station will get you within walking distance. On the Lower East Side I picked up a banh mi at An Choi on Orchard, and some groceries at Orchard Market, across the street. The sun had come out and the city warmed a little. I ran into another artist friend who was selling Christmas trees for a little extra money, whose own sculptures and photographs, when I reflected later, recall some of the found capitalist detritus pointed to by Arte Povera.

Here, patterns in a Polke print suite visually rhyme with the sheer fabric of Mack’s assemblage of a ladder, armature and textiles. Nearby, Stockholder’s energetic wall relief is tempered by two small pieces by Tuttle: rough squares of plywood ornamented with a few geometric figures in matte paint. Direct influence is less interesting here than the historical narrative of how images recur in various ways, or how approaches to artmaking can carry different meanings when they’re used in new contexts.

Just around the corner at Bureau, Libby Rothfeld recalled yet another Italian: Ettore Sottsass, the influential designer and Memphis Group co-founder whose retrospective, Radical Design, ran at the Met Breuer this past summer. Rothfeld’s sculptures of mutant laminate furniture, disposable water bottles and dry-cleaned clothing resemble a dystopian vision. Several pieces, such as Bulletin Board #1 (2017), have been graffitied, and resemble a few of the drawings in the Michelangelo show, with naturalistic studies of hand gestures. Rothfeld’s images appear like the aftermath of a magazine photoshoot, with high-end consumer goods reduced to disarray, or a future in which upper-class excess is suddenly upended, sullied, vandalized. It’s a grim story, something out of JG Ballard; it’s very pretty and cold.

On my way to get an espresso at The Sosta on Kenmare, I passed through Canada on Broome Street, where Matt Connors has his fifth solo show with the gallery. Here he has divided up Canada’s main large gallery space at the rear into four equally-sized spaces, similar to art fair booths. Each has a set of new paintings, Connors’s charming derivations of modern and contemporary work. Here, one sees reverberations of Josef Albers, Richard Diebenkorn, Ashley Bickerton, John McLaughlin and others, as Connors varies his hand between hard edge and more expressive mark-making. His work is a claim for the usefulness of blithe reclamation of past modes.

The sun had set and the city took on some of the black and purple tones in those paintings by Conners as I walked into the glowing pink cafe to sip coffee and warm up again.

With gallery doors firmly closed, and their interactions with us forced to become digital-only apparitions, web designers have to be smarter than ever.
Read More 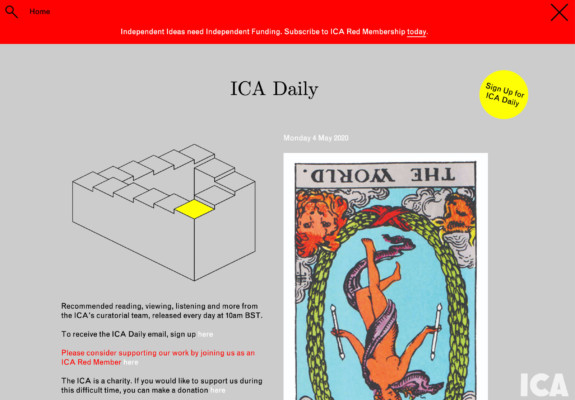 A new monograph explores the painter’s approach to colour, composition and companionship on an “epic scale”.
Read More