It’s only a few days before the installation of his latest exhibition at Bowman Sculpture, and Paul de Monchaux is thinking about how heavy his sculptures are to move. It’s hardly the first time eighty-four-year-old de Monchaux, former head of sculpture at Camberwell, has faced the challenge of transporting his large, plaster and bronze works across town. “Some of the works are very large and difficult to move—you can’t just tuck it under your arm and get on the tube! There is a new plaster work that is pretty fragile, so my big enterprise at the moment is getting it to the gallery in one piece…”

On 8 January the exhibition opens to the public—hopefully with that new Volute work intact—and it is dedicated to de Monchaux’s Volutes. Volutes are the sensual, curly-tops that are an integral and widely referenced part of classical architecture, the capital of the Ionic column. Their spiral shapes, suggestive of feminine forms, pregnant bellies or tendrils of hair, has fascinated de Monchaux for almost thirty years, the subject of an ongoing series of oversize monochrome sculptures, each with their own intrinsic rhythm and gestural, gender-fluid sensuality.

You’re occupied now with getting works to the gallery—what happens when they get there?

There is a unifying theme to this show; although the sculptures were completed over a number of years, they all refer to the spiralling circular geometry of the volute. It will be about making that visible in the space—in this case there’s a staircase with a glass balustrade in the centre of the gallery, so one of the challenges is being able to see the whole show when you step into the room. I have a plan on paper and hopefully we will get it right by the end of the day!

What is it about volutes that has fascinated you for so long?

I think the thing that’s interested me, for a very long time, is the fact that these shapes, by now overused to the point of invisibility, began not just as structures but as symbolic representations of real things—plants, people. Years ago I discovered a basement room in the British Museum with fragments of columns from Greek antiquity displayed at eye level. Standing right next to them was a very powerful experience, a defining moment for me. Some were as much as five or six feet across and seeing their geometry close up, and particularly the way the volutes arrested movement by returning into themselves, is something I have been exploring ever since.

One of the only non-volute works in the show, Song School, was inspired by something you saw in Toulouse—could you recount that story?

My daughter had a show in Toulouse and my wife and I were visiting. We were wandering through town and we went into the cathedral, which is a vast Romanesque building, and there was no-one there except two singers standing at either end of the church—with a considerable distance between them, it’s a big place—and they were singing a call and response sequence. It was just stunning: their two voices in this huge space, going back and forth. That episode stuck in my mind. I don’t begin a piece of work with a title, I have to find one sooner or later, but this work, with its gradually opening centre, seemed to fit well with the experience in the cathedral.

You travelled a lot in your early life, from Canada to Nigeria. How did that affect your work do you think?

The major moving around took place in my childhood and early adulthood [de Monchaux was born in Montreal in 1934 and had an itinerant childhood, attending fifteen schools across Ireland, Australia, Canada, the USA and South America]. I was moving all the time and there’s no doubt the things you see feed into your work later on. But I’ve lived in South-East London for fifty odd years now, in the same house, so in fact all the work has been generated in the studio here in London. I’ve had to go to many places, of course, to put up commissioned work and one of the positive things about making work for a particular site, in a public space, is that you learn about the place: you have to learn where the light is coming from, about the slope of the land, the near and distant background and seasonal changes. That’s been very interesting—it’s a very stimulating part of the process, not just to make a new sculpture but to get to know a new place. When you’re working on a commission you have to look much more intensely than you would if you were just passing through.

I think that’s what’s beautiful about art—the opportunity to have time to reflect and engage more deeply with our surroundings. From your experience over the years, what changes have you observed in sculpture?

I think the activity is always in a state of flux and probably always moving in a circular manner between one preoccupation or another. During the period I’ve been working, the emphasis has oscillated between a concern about materials, or about form, or about storytelling and subject matter. Sometimes it comes together, but usually there’s a surge in interest in one aspect or another. In terms of my own work, I want the narrative to lie within the work and not outside it. As for contemporary artists that have interested me, I’m very impressed by Rachel Whiteread’s work and identify strongly with the way she tackles things, using the casting process as a way of looking at something very closely. I’ve also been very interested in—and have enjoyed the rigour and inventiveness of—the work of Tess Jaray, Tomma Abts, Richard Serra, Nigel Hall, Richard Deacon and John Davies. 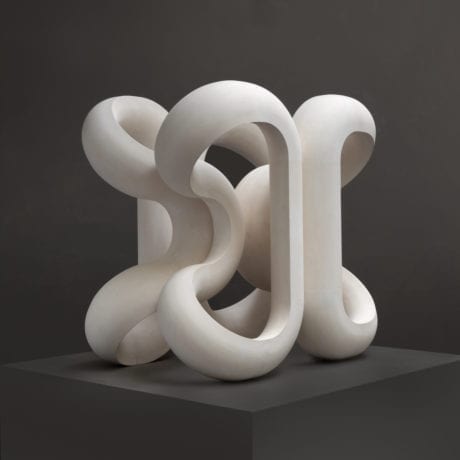