Playwrights can be mighty prophetic. Lynn Nottage started working on Sweat seven years ago, interviewing residents of Reading, Pennsylvania. That April, President Obama used his White House Correspondents Dinner to roast Donald Trump, sowing the seeds of a retaliatory presidential run. Sweat would premiere six weeks after Trump launched his campaign in 2015. No-one who saw it could have been surprised by his success. Nottage lays bare the rationale—and the resentment—of his core voter base: the white working-classing, those left behind by late capitalism. Sweat serves up a rich slice of Rust Belt life.

Prescient as it is, Sweat was written with hindsight. By 2010, Reading had the highest proportion of impoverished citizens in the US. The New York Times would call it “the poorest city in the country.” Built on industry, a fortress of iron and steel, it had been decimated by decades of industrial decline—like so many old American cities. Largely set in 2000, Sweat looks back on that descent, as a local factory squeezes one workforce out to cut costs with cheap migrant labour. Sat at the intersection of class and race, it shows an economic downturn giving rise to racial resentments—precisely what Trump’s rhetoric would tap into.

On the boxy TV behind the bar at Mike’s Tavern, rolling news flickers by. Updates from the electoral campaign trial trickle onto the screen: George W Bush and Al Gore neck-and-neck, a see-saw moment in US history. The dive bar’s drinkers scarcely notice. Barman Stan (Stuart MacQuarrie), an ex-factory man injured at work, says he won’t vote—nothing will change anyway—and his regulars, three female floor workers, are relatively content, beneficiaries of a strong union and long-term job security. Martha Plimpton’s Tracey and Claire Perkins’ Cynthia have worked their twenty-plus years, and their sons, Jason and Chris, have followed in their wake.

Yet the play opens eight years later, global crash kicking in, with both boys emerging from prison: Jason covered in neo-Nazi tattoos, bristling at his black parole officer; Chris wary of his old friend’s new racial hatred. Sweat’s nostalgic flashback unfolds their fall and, with it, that of Reading as a whole. As the factory undercuts its traditional base, resentments bubble up in the once-friendly bar, splitting a community along racial fault-lines.

“Beneath its sociological insights, Sweat’s real theme is change”

Sweat might speak through its characters, but it’s ultimately a portrait of a place. Frankie Bradshaw’s design is an act of homage. She recreates a real Reading bar, much loved by locals, on the Donmar’s small stage. Mike’s Tavern shut its doors in 2016—an event prophesized in Nottage’s play—but it here it is, welcoming and warm, like a piece of the past preserved in amber.

It’s a loving recreation, not unlike Kling and Bang’s simulacra of a recently demolished Reykjavik dive, Sirkus, at Frieze in 2008. The original sign hangs overhead, blue and red on white; and an old Spuds MacKenzie lamp, a dog in a Bud Light jumper, sits on the cheap pine bar as it once did. Behind it, a collection of knick-knacks and trophies becomes symbolic onstage, a collage of American culture: a framed antique pistol, a Cadillac in black and white, a whoopee cushion, Michael Jackson in his prime. The place has history and personality in spades.

Here, though, Mike’s Tavern is encased in an industrial setting; the skeletal shell of the factory nearby. Rust-encrusted rafters reach up the walls to a vast metal ribcage up in the roof. Chunky industrial hooks hang down overhead, hinting at bodies strung up and butchered. It’s almost ghostly, a shipwreck of a place, and it reeks of disuse. Vents are clogged up, pipes have run dry. You feel the absence of activity, as if the building itself had seized up with arthritis. It’s a superb touch, staining this rosy past with the present’s malaise.

By placing the bar on the factory floor, Bradshaw makes clear that this community depends on its industry. When its workers go broke so, in time, will the bar and, sure enough, when the play skips ahead, Mike’s Tavern has changed out of recognition: its bric-a-brac replaced with banal neon signs, its character gone, its locals moved on. The old bar seems to sit in the belly of an iron whale, swallowed up and sucked under by something far bigger than itself. Economic travails, Bradshaw’s set suggests, are sent to try us.

Beneath its sociological insights, Sweat’s real theme is change. Just as Mike’s Tavern feels out of time, untouched by contemporary urban tastes, its characters are too. They’ve been having the same conversations for twenty-odd years, celebrating their birthdays here with the same shots at the same bar, working the same jobs on the same factory floor since leaving high school. Beneath that stagnant surface, however, the world has turned: NAFTA [The North American Free Trade Agreement] has shifted the economic conditions, migrants have moved Reading’s demographics and both the town and its industry, taken for granted, have started showing signs of decay.

“Post trauma, change is permanent and it’s physical. It alters appearances and identities”

Politically, Nottage butts social progress up against economic decline. That her workers are women is a pointed mark of gender equality, but as the traditional white working class, whose forefathers built the city from scratch, finds itself undercut by black and Latino communities, it pushes back. Nottage echoes sociopolitical shifts with personal ones, as her characters slide into middle age accumulating emotional baggage, physical injuries and prejudices.

And Sweat shows that loss leads to lives unravelling for good. Just as Leanne Best’s Jessie, pining for her ex, succumbs to boozy dependence, Plimpton’s steely, sharp Tracey will, like so many Americans, turn to opioids. Post trauma, change is permanent and it’s physical. It alters appearances and identities.

These characters are, however, trapped in too well-made a play. For all its sheer skill, holding characters so carefully and distilling vast sociopolitical themes, Sweat signposts its action a long way off. It is, at heart, a classic picket line plot with added intersectionality: colleagues get promoted, the neediest are seen as scabs. By flashing forward, Nottage pre-empts her past plot and, while it forces a feeling of tragic inevitability, the play feels predictable—especially after two years of Trump. In fact, Sweat’s prescience is undermined by the benefit of our hindsight. Nottage got there first, and eloquently so, but other commentators have caught up as to how America’s white working-class found itself left behind.

Until 26 January at Donmar Warehouse, London 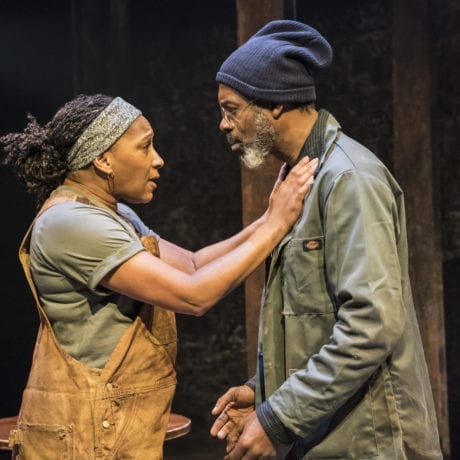