Tala Madani paints a nightmarish vision of motherhood, which no doubt raises a nod of recognition in those who are already parents, and a sense of dread in those who wish to be. Her series of Shit Mom works depict mothers covered in excrement, tending to equally brown-smeared children who seem to be pushing their caretakers to the limit.

Her paintings are intimate and sometimes violent, showing a raw side of parenthood and loss of self that is rarely touched upon in such a visceral way. Viewing Madani’s paintings, it often feels as though you are seeing through the horrified eyes of the parent rather than the children.

A new series of works, showing at Pilar Corrias on London’s Saville Row, introduces the viewer to the world of the child. Painted with the same sense of powerfully unsettling menace, Chalk Mark (its partner show, Skid Mark, recently closed at the gallery’s Eastcastle Street space) explores themes of control and discipline, which ultimately transform those in early life from Madani’s uninhibited, poop-covered children into functioning members of society. But at what cost?

“Viewing Madani’s paintings, it often feels as though you are seeing through the horrified eyes of the parent rather than the children”

The artist plays with ideas of repetition, mirroring methods used by mainstream education to drill information into children. Black and white works evoke chalkboard drawings. One piece shows a line of unruly nude adults climbing into the gaping mouth of an enormous man, while others walk out of his backside after being metaphorically “digested” by the system, neat and fully clothed.

Small stick figures climb into the mouth of a cartoonish child, while question marks appear out the other end. The children are not yet formed into definite, conforming beings, but it’s only a matter of time before they find themselves lining up in the adult queue.

In Perfect Copy II, the silhouette of a small child is seen from behind, saluting a naïve drawing of a man in uniform. Authority figures in the form of teachers, men in uniform and parents are both feared and idolised in these works. Children often appear to be the terrorisers in Madani’s paintings. Chalk Mark flips this on its head, showing them as hopelessly vulnerable in an adult world that will soon morph them beyond recognition: less messy, but also less alive. 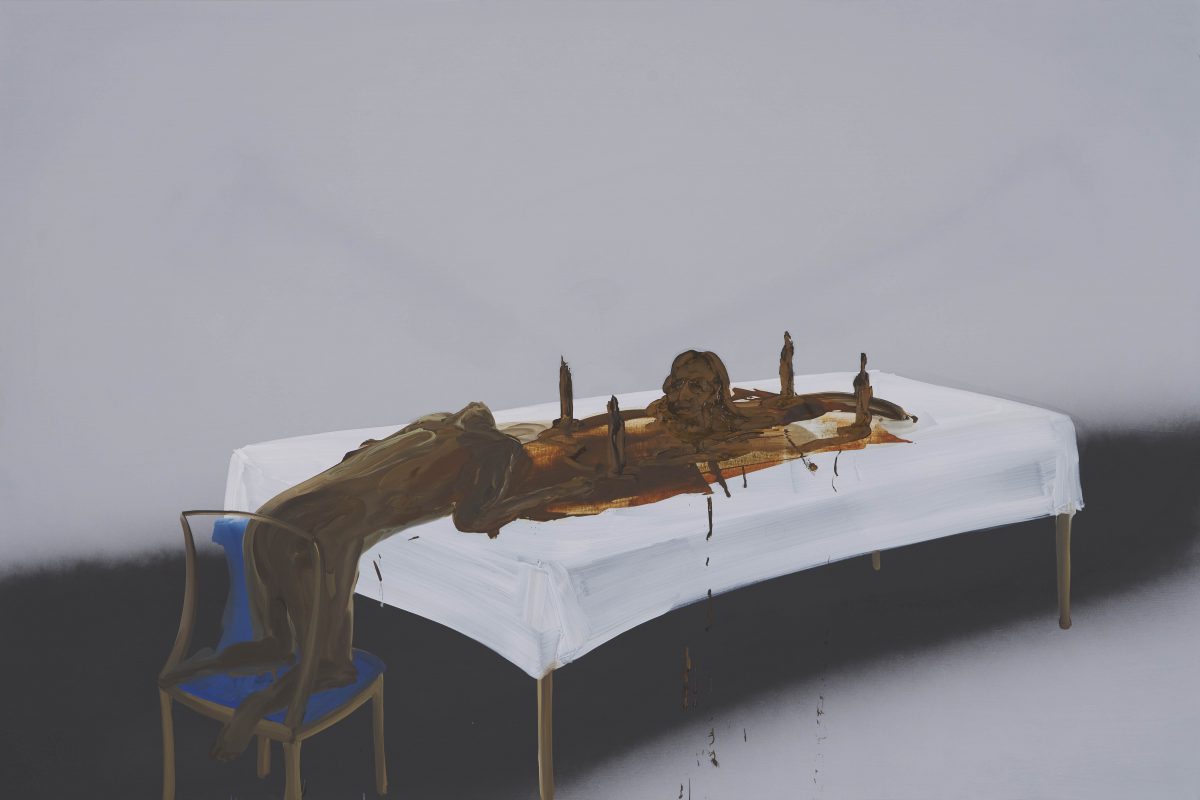 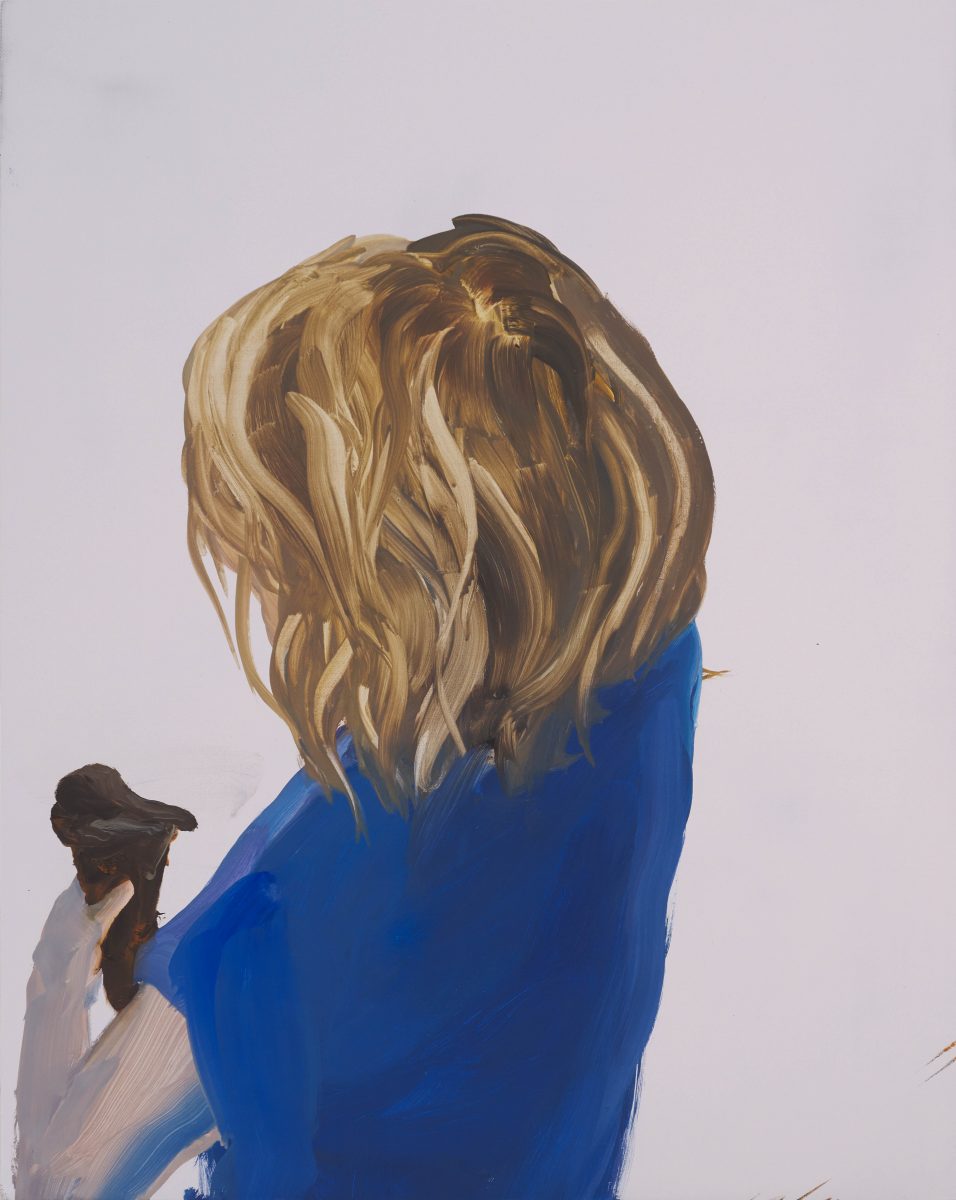 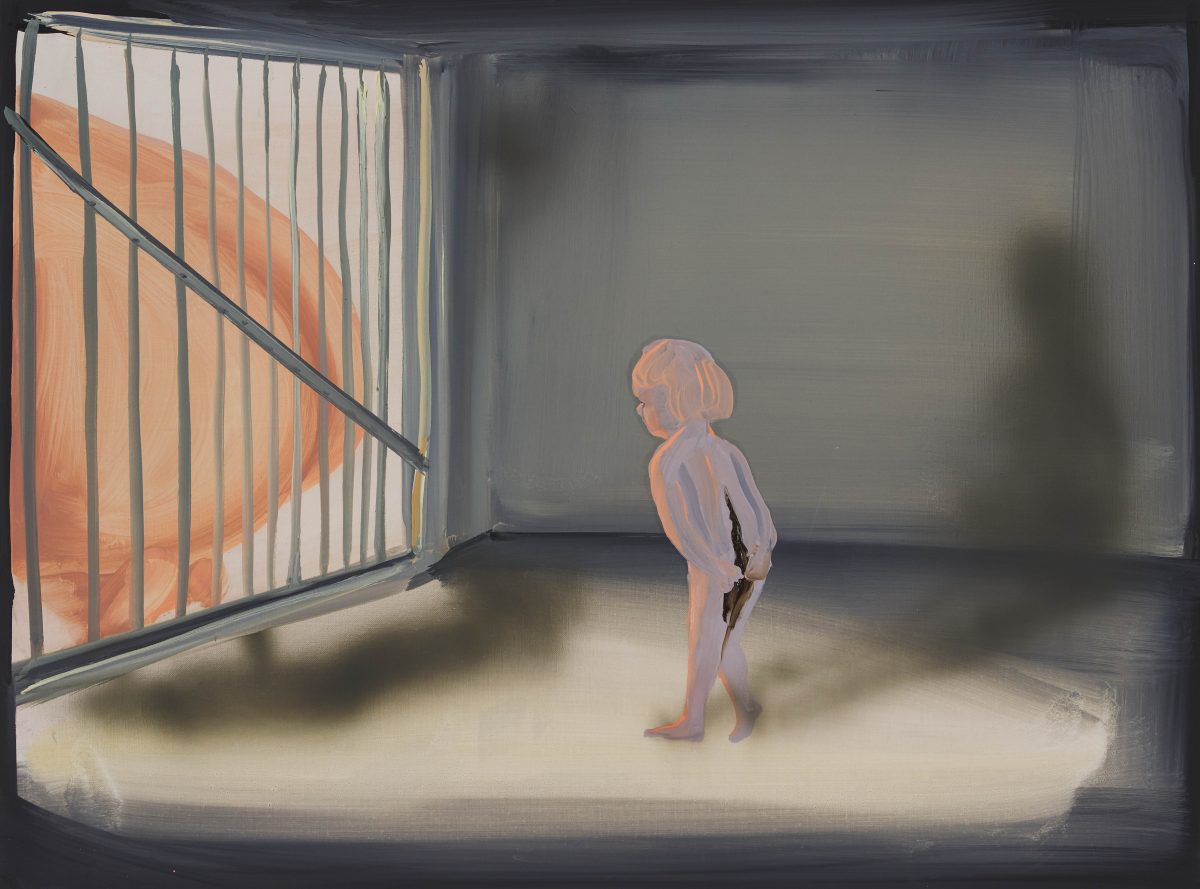 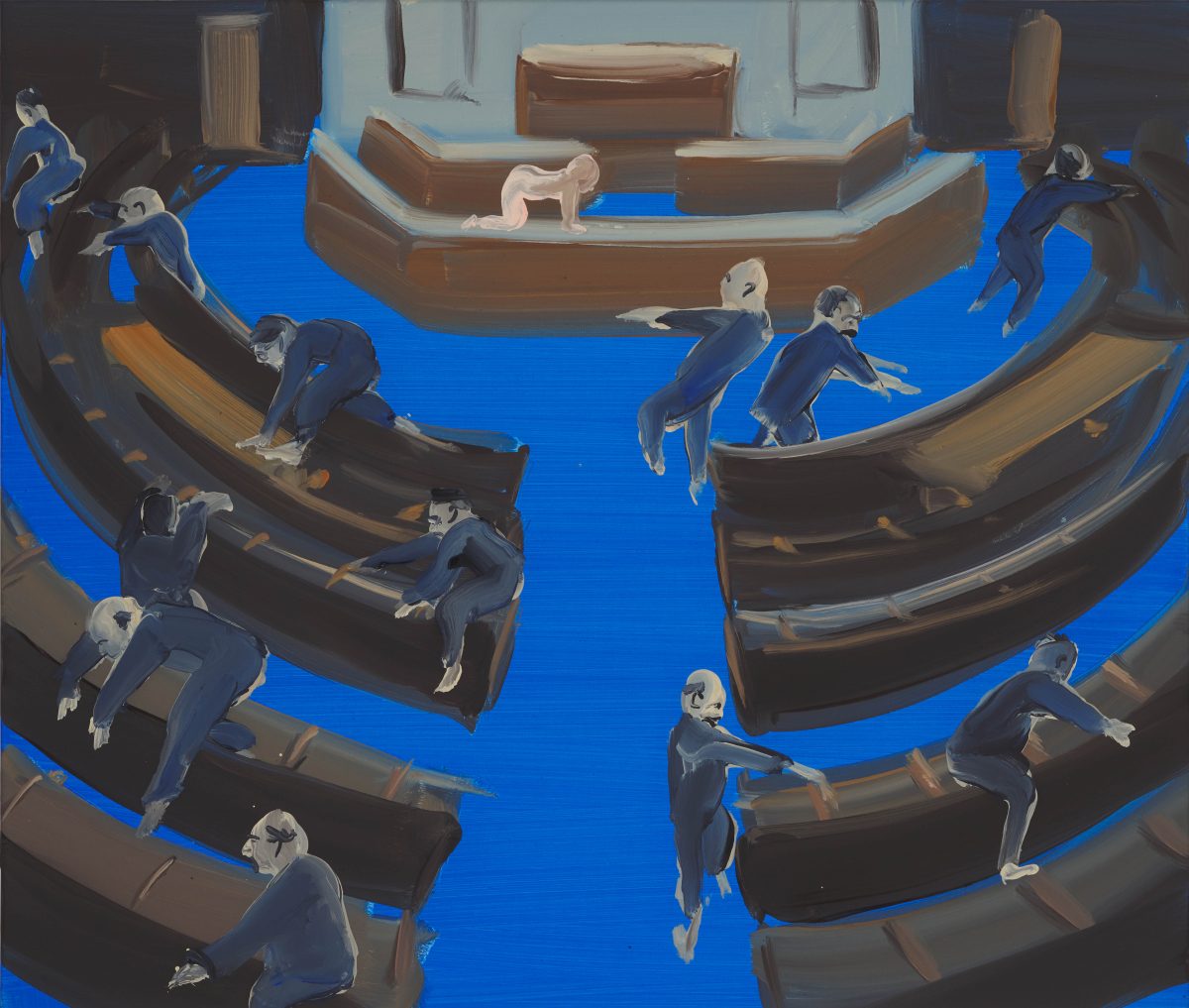 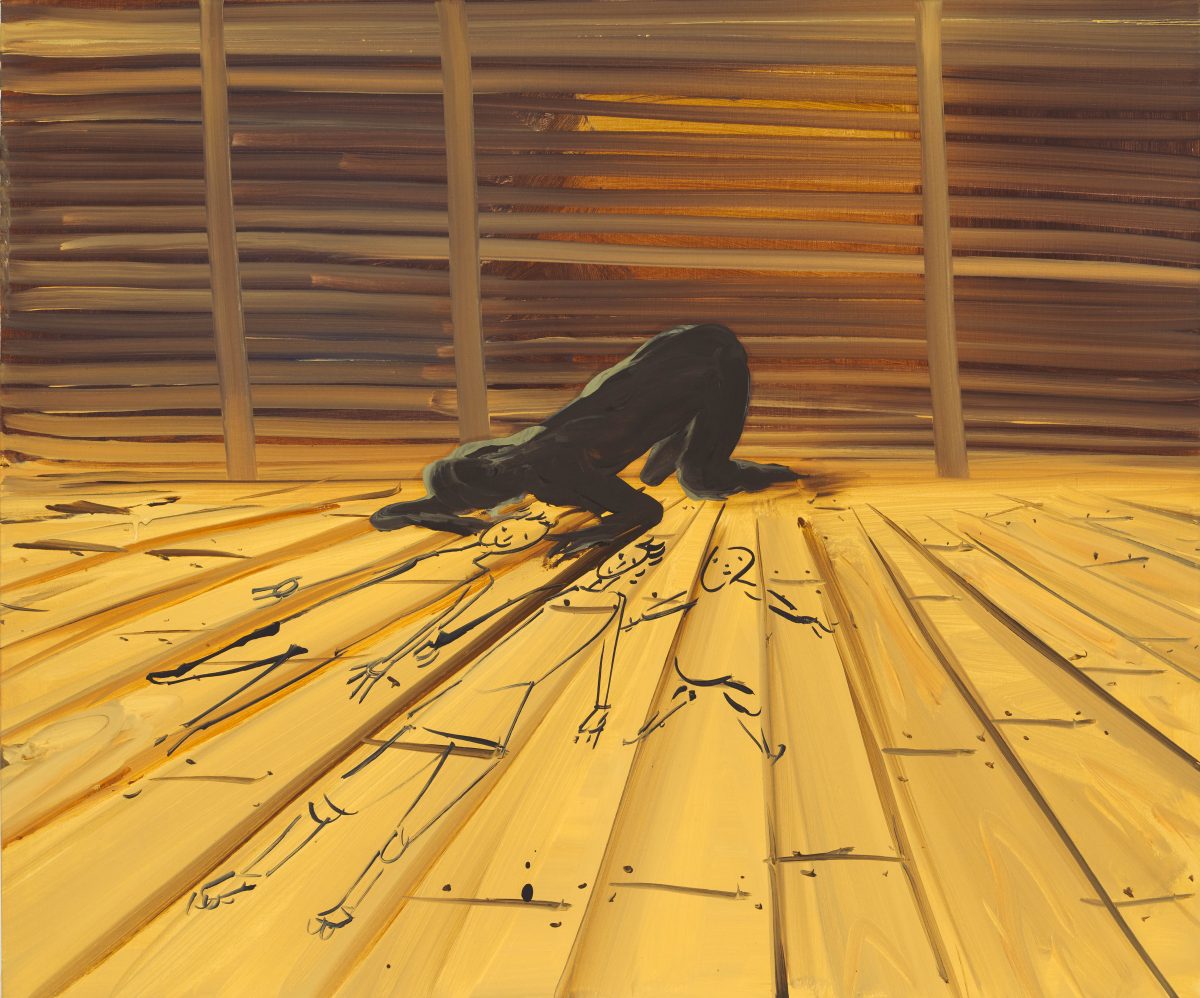 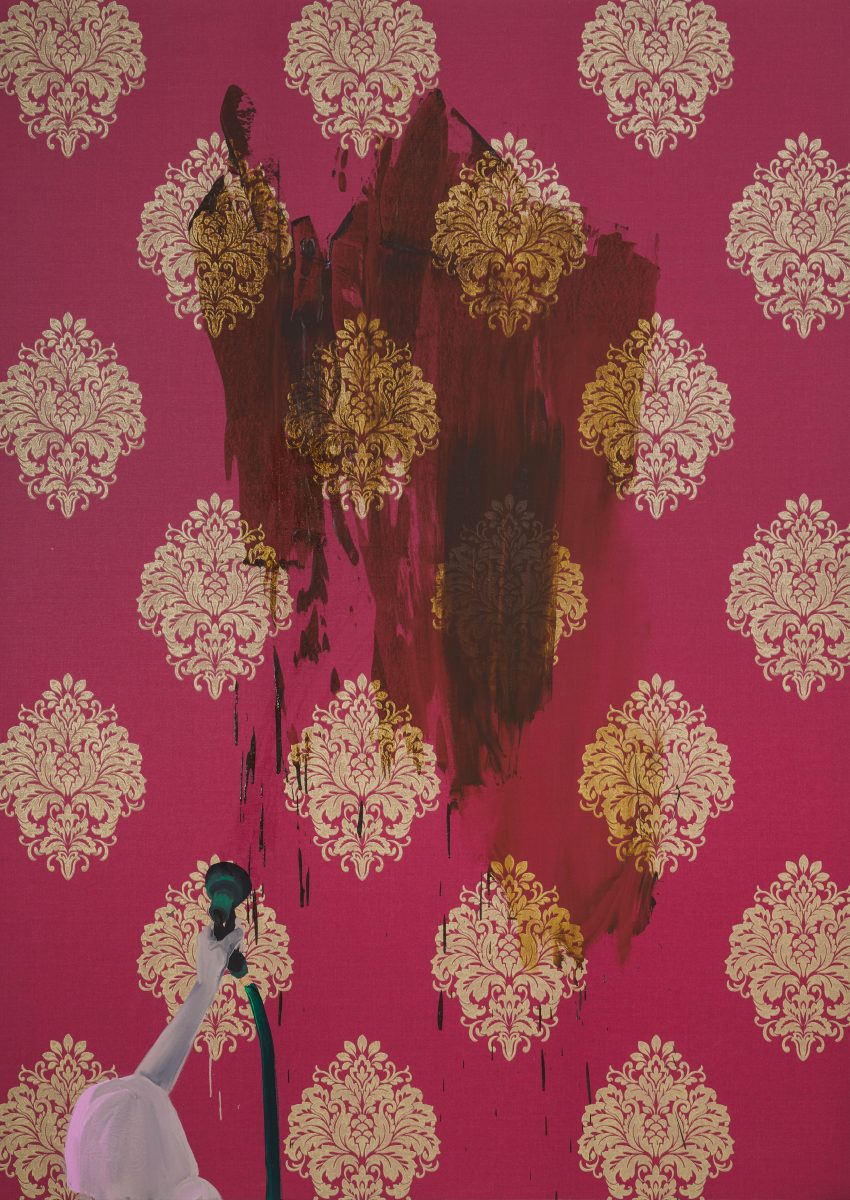 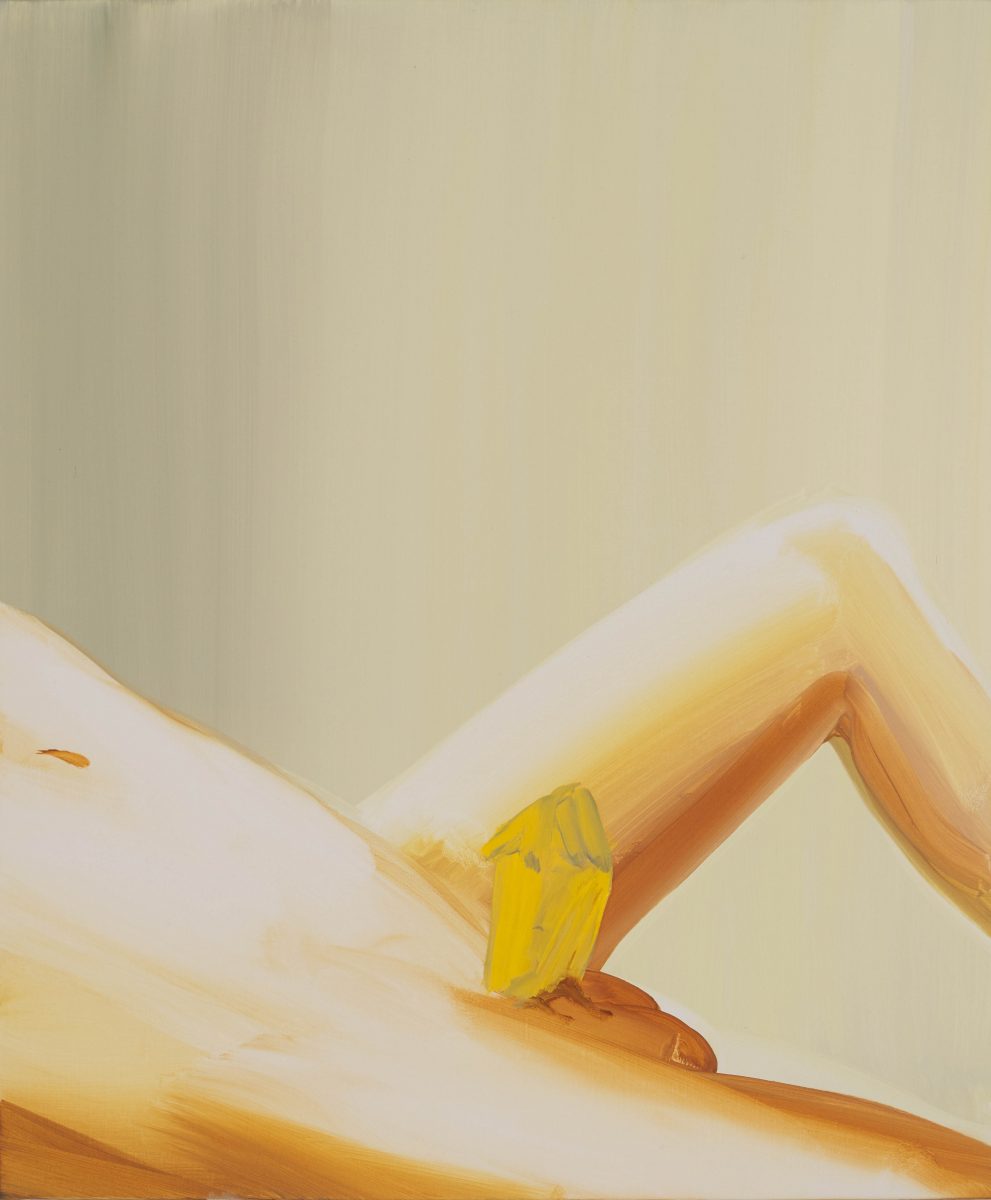 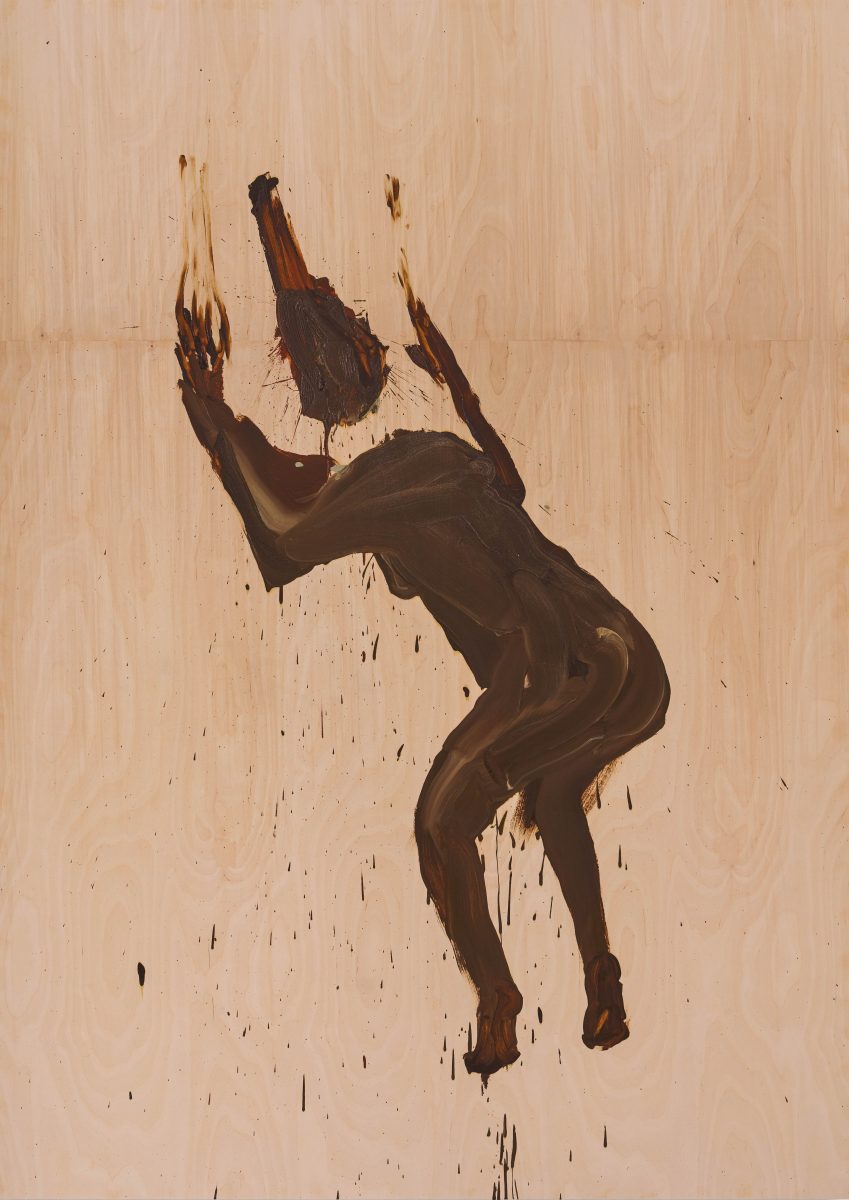 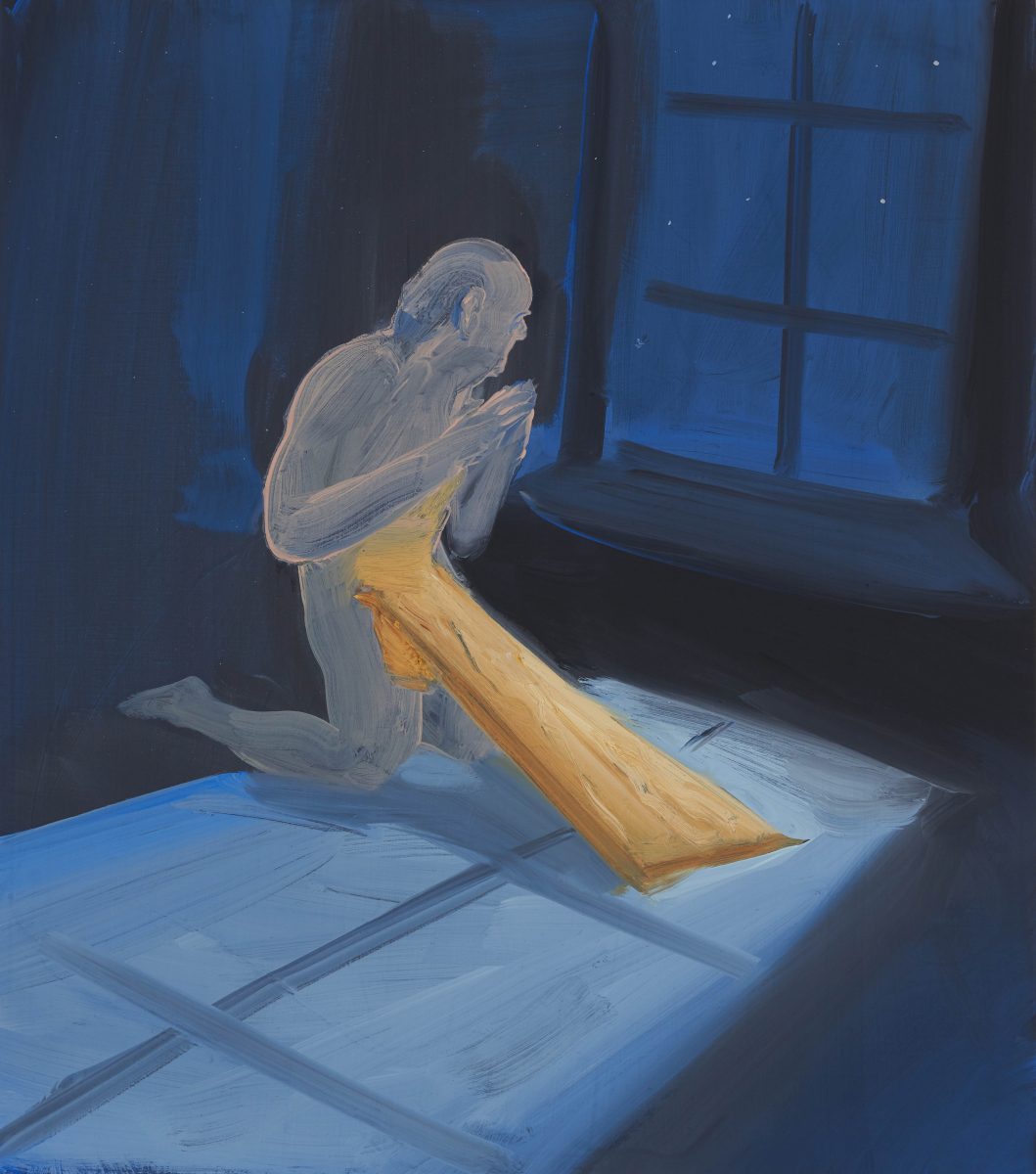 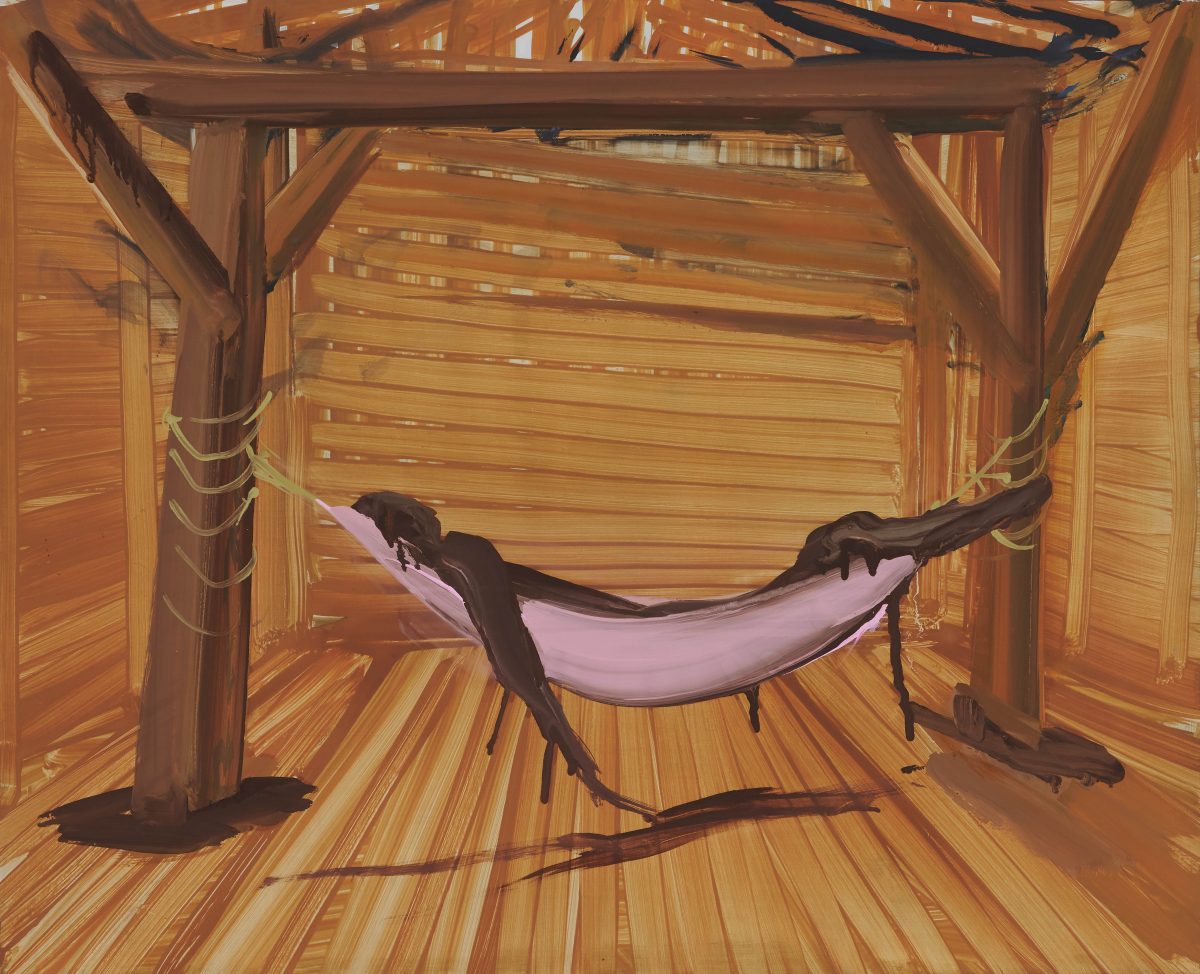 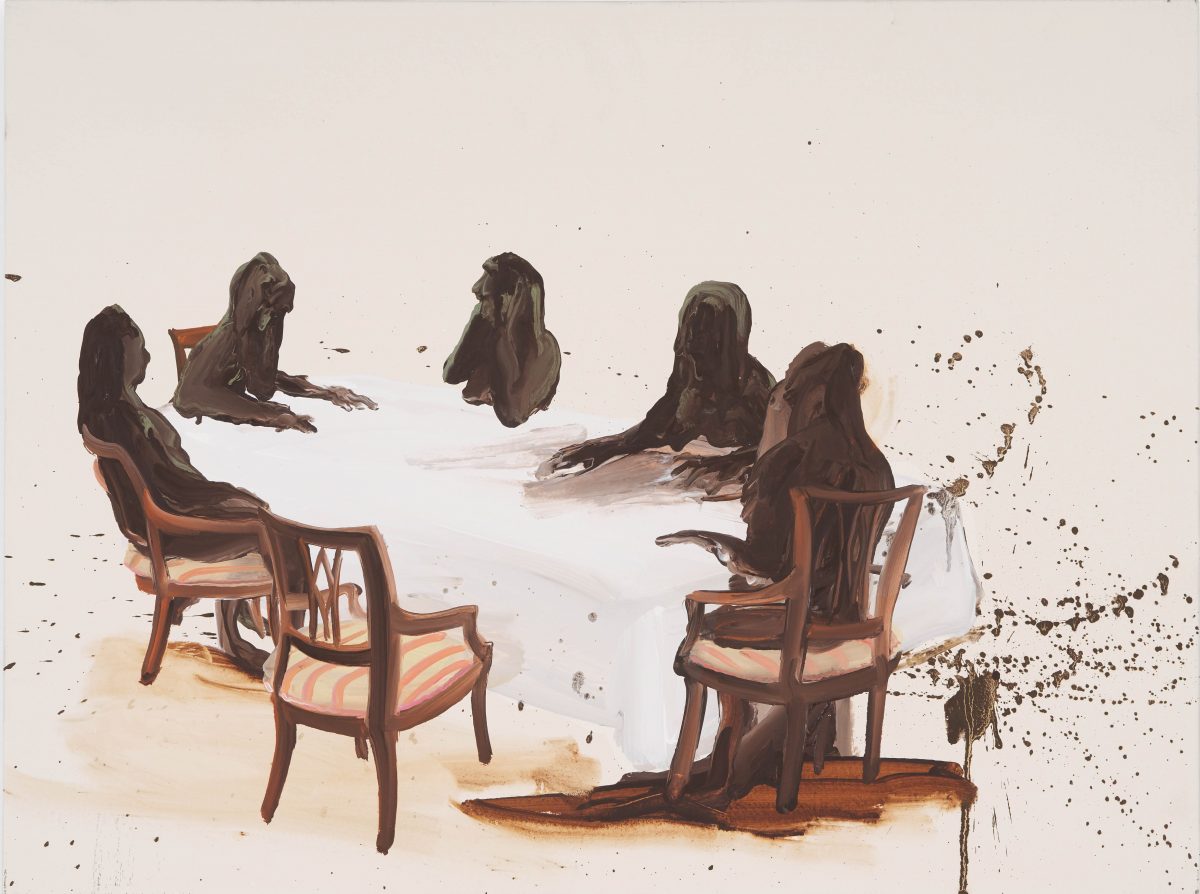 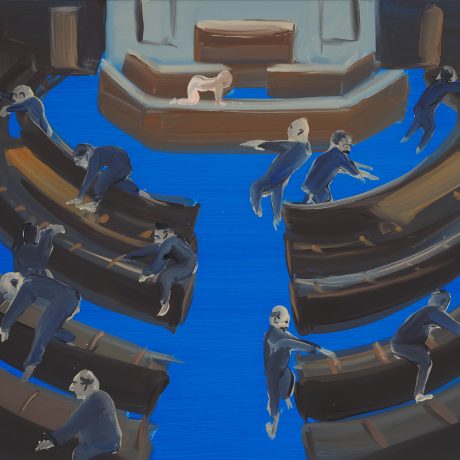