The story sounds like when Jodorowsky chased Dali for his movie Dune. Heji Shin—an artist who isn’t shy to go with her camera where others don’t dare—wrote to Kanye West. The next thing she knew, she was in Chicago, and then rural Uganda, and finally Los Angeles. Shooting one of the world’s most famous and controversial figures was never going to be easy, but Shin is cool about it all—including the criticism she’s received since the photographs of West, printed big, went up on the walls of the Kunsthalle Zürich. What do these portraits mean in this context? As always Shin points, not without irony, to our collective pictorial psyche. She creates images out of images. She makes the most putative things—sex, birth, Instagram selfies, Kanye West—look wonderful and mystifying.

Can you tell me a bit about the solo exhibition you’ve just opened in Zurich?

I wanted to show huge scale portraits of Kanye. I liked the idea of showing Kanye in a Swiss institution—in general in museums. From his work I knew about his genuine interest in art. He considers himself as the greatest artist. It made sense to me to make work about him. I got his email from a friend of mine, but didn’t expect anything. It was just an intuition, but I knew I had a slight chance.

“Kanye moves in and out of ideologies and speaks with a lot of freedom, sometimes to the point of being incoherent or contradictory”

Kanye West is like an anti-hero of our times, an almost Shakespearean figure. What compelled you to make a work about him?

I have always had a lot of fun reading about him. He is the most interesting and exciting personality. Lately, there’s an implicit idea going around that artists have to represent and advance political causes. Kanye moves in and out of ideologies and speaks with a lot of freedom, sometimes to the point of being incoherent or contradictory, and that’s the kind of bare minimum freedom I think art and complex personalities like artists need to even exist. Just in the last few days I have encountered questions about why I took his portrait. A few didn’t seem very happy about it and I knew it worked exactly the way I hoped.

How did the shoot come about and what was it like?

Kanye has done a lot of collaborations with people in the art world and fashion. It wasn’t that difficult to get his email. I wrote to him and he replied. Two days later I went to Chicago, where he invited me to go with him to Uganda. At the time he was inviting everyone to share the experience to go to Uganda with him. The shoot took place in LA after we came back from Uganda. He is a very busy man, so I knew I didn’t have a lot of time.

He has seen the photographs and approved them. He understood what I was trying to do. He wasn’t so much into the idea to be directed and photographed in a studio setting, but he agreed to the shoot and he kept his word. I think I had around ten minutes. But this was after I had followed him to Chicago, Los Angeles and to the middle of the wild in Uganda for weeks.

Why did you feel the images had to be printed big?

It never crossed my mind to do this work small. The word genius has been mentioned more about him than about anyone else. He considers himself as one. It is an affirmation, but it is not free of irony to show him that big in an art institution. An American rapper, as American and mainstream as it gets, an artist, fashion designer, philanthropist, one of the most unfollowed person on social media history. Why would you make an artwork of him small? I am not interested in showing his personal or human side at all.

People took offense and I am fully aware of why. He is fully aware of it. He has a great understanding of art. I know I couldn’t have done this show with anyone other than him.

“It is an affirmation, but it is not free of irony to show him that big in an art institution. An American rapper, as American and mainstream as it gets”

You’re also recently made a new series, #LonelyGirls, inspired by a selfie “trend” on Instagram. What made you want to make a work about it?

I made fun of selfies on social media at the time and was thinking about the representation of yourself on these platforms. At the end it is always very personal and it is always about yourself, even when I do work about Kanye.

Until 3 February 2019 at Kunsthalle Zürich 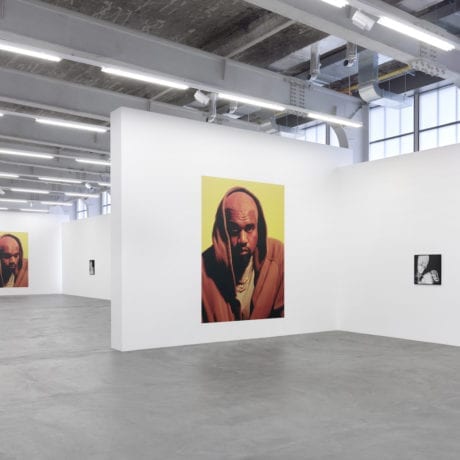