There’s a liberated and celebratory depiction of nudity and sex in your work, contrasted with a sticky, sometimes dark way of presenting it. How does sex feed in for you?

I look at so many Renaissance paintings and so many people are naked in them, especially women. I don’t think I comment that much sex in the works, it’s just that people don’t have clothes on. People wear really boring clothes, they don’t really interest me, they aren’t stimulating in any way. Fashion is really now, so to give the paintings a bit of a timeless sense it’s good to not be wearing very much. It takes away the time and place a little bit more if they’re just nude figures.

Your characters often feel half exposed. Sometimes they might just be naked from the waist down, which somehow feels more crude than complete nudity. Although there is an innocence to that too, as children often run around in a t-shirt with no pants on—something that looks very strange on an adult!

It’s really funny, but why do we laugh at that rather than the other way around? As a child you do it for attention. If you do that you know everyone will react, you’re aware of that from quite an early age but then you become embarrassed by it rather than celebrating it and become more conservative, and I think that’s a shame. I like the rawness of being naked. It brings it back to being a human and not having this censorship. If I want it to be a raw, sad painting I think it’s important that they’re nude.

Do you see the works as being free and open or are they quite violent?

They are quite free I think, and I have to be open with the work so other people can experience that. I like everything to be on the surface and quite obvious so people don’t have to guess it, they can just see. People can get really mad looking at these, but they are overlooking what they’re really upset about.

There is a sadness I think in a lot of the works. It’s liberated but not necessarily utopian.

There’s one sexy painting in Fat, Sugar, Salt [Lewis’s early 2018 show with Edel Assanti gallery in London] of a big gay night. I hadn’t made any gay paintings for a while, and I felt it was time to let a couple out! There’s a night I went to at Shoreditch Town Hall; people were in dog masks and on leads, drag queens. The painting’s called Crying Town, so the idea of the town crier as it’s in the town hall, but also the cleansing of gay venues, especially around East London and Soho. So this sadness around it or memory. I’ve been reading about gay bars closing in the last few years and it’s not just that people are now drinking cheap supermarket booze at home and meeting on Grindr or Tinder, it’s something else that’s shifted. It’s always been very focused around alcohol and sex and I think people are starting to look after themselves a bit more and seek some other kind of social scene. The gay scene is all about drugs and drag queens and cheesy music, and if you don’t like that it’s hard to find something that’s alternative.

So is there a hedonism you’re tapping into with the paintings?

There has to be I think, and there’s a real fun in them. I love doing this, it’s so exciting and so fun. I don’t come here and torture myself. Prawn Cocktail is meant to be a celebration of her [Lewis’s subject], I like her. It’s meant to be a good thing. To give her a moment, to enjoy her. I remember the exact woman, she was absolutely fascinating. She had a skin-tight outfit all in one orange colour, with these boots. Only in America you would see someone like that.

Probably the best painting was Wives and Girlfriends. I should have called it Wives and Transfriends, but it was from a transvestite club that I went to practically every week in New York. Lots of people there were in between, some had had full surgery and some had half. I found it fascinating, it’s one of the best places I’ve ever been to in my life. The women were absolutely stunning, the main figure was like Grace Jones, this beautiful huge black guy who had had his breasts done but still had his penis. I like that people can just look incredible regardless of what they are or who they want to be. The appreciation that the men who went there had for them was extraordinary. They just loved them and lavished them and wanted to be with them. I couldn’t really work it out and that’s what I liked about it. I wasn’t sexually attracted to the girls but I also wasn’t attractive to the men there, so I could just be a total voyeur and sit there and observe it all.

This article originally appeared in issue 34 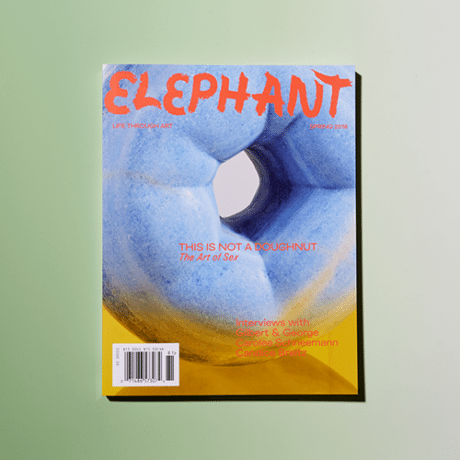