The Kiasma Museum of Contemporary Art in Helsinki attempts––like many museums that are not the main centre of attention––to walk a fine line between global ambitions and community roots. One does not need to spend too much time in town to hear some critical remarks. “I wish they would not underestimate their audience,” a local artist told me, referring to the museum’s educational way of addressing art. Another artist pointed to the museum’s eagerness to be “contemporary” and “international”, which at times blindfolds the staff to potential close by. However, the two goals, local and global, do not necessarily have to contradict.

Two recently opened exhibitions offer the opportunity for a closer look. The first is a show by Helsinki-based artist Maija Luutonen, who was awarded the newly launched Kiasma Commission, sponsored by the Kordelin Foundation. The second is a group presentation titled There and Back Again, featuring artists from Finland and the Baltic region, whose work has been acquired for the collection.

Kiasma follows a collecting model based on widening the circle. Starting from Finnish art, it becomes broader, from direct Baltic neighbours, to Europe and Russia. Jaan Toomik from Tallinn, Estonia, has an early video piece called Dancing Home (1995) on display, showing the artist dancing nervously on the deck of a ferry boat, played in a loop to the point of irritation. But through that, he casts a clear physical presence.

Riga-based artist Daria Melnikova presents Rooms 3 Follow Me (2015), which consists of an altarpiece comprised of minimal metal tubes and a number of electric candles, built around the photo of a young woman. The piece, with its strange, cool aesthetics, was inspired by present-day Baptist churches, mixed with elements of popular culture. The artist is interested in routines traced in working spaces or, in this case, places of worship. The piece, with an additional soundscape, makes you wander between heartfelt faith and fake belief.

In five newly-commissioned works by Latvian born, Helsinki-based artist Inga Meldere, painting and print technique are mixed. Photographic images form a base layer, on top of which brushwork is added, sometimes subtle, elsewhere in colourful stripes, counterbalancing or hiding the image underneath. Viewers move close to the work to find out what, in fact, they are looking at and this perceptional focus makes the piece attractive and, literally, superficial. The main concept is happening on the surface, in the interference between layers of print and paint.

“Luutonen likes to reduce things, over and over, to the point that there is just enough information to still ‘read’ the image…”

In my mind, Meldere’s work starts to create a dialogue with paintings by Maija Luutonen, who shows on the ground level of the museum. Luutonen had made an installation of leaning panels, some loosely hanging fabric and objects. It looks like something still in the process of being conceived, although three paintings are hung high on the wall, which seem perfectly ready and finished. In one of them, a close-up photo of rice noodles produces a curving pattern overpainted with vertical stripes. Luutonen’s works look like canvases, even though they are all paper works, with paint applied through a high-pressure airbrush. The artist chooses her motifs from everyday observations (long hairs hiding a face; a denim pocket) and attention to surface and perceptional surprise connects her work with Meldere. Luutonen likes to reduce things, over and over, to the point that there is just enough information to still “read” the image, without it being obvious. I see her potential in this approach of ongoing reduction––not in showing her process, or in alleged attempts “to expand and stretch the terms of painting”, as the museum wrote.

It seems significant that Kiasma has commissioned two painters who present work that makes the act of painting so explicit. Should this be understood as an apologetic attitude towards the medium, afraid to show “normal” painting? Is it an ambition to renew and “expand” painting? That would be a limited, materialistic view; it does not happen just by changing the traditional format or technique. It is also the drive, the underlying content and spirit that defines the quality of a painting and its relation to our times. It left me curious to get a broader and more articulated view of what is being painted in Helsinki and the Baltic region. The museum presents a slice of it, but certainly not the whole pie.

Maija Luutonen and There and Back Again 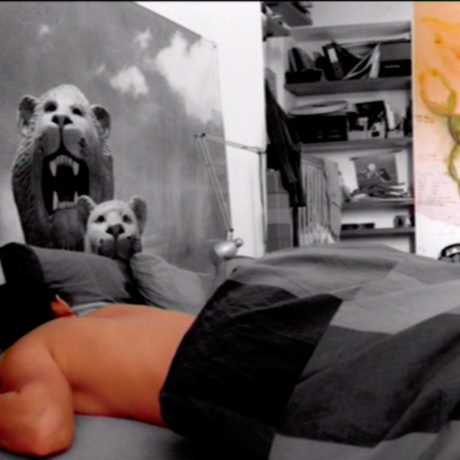