“This year is the most international Frieze London yet,” said Victoria Siddall at a press conference to officially announce Frieze’s 2019 fairs and programmes, presented by its curators and directors. Siddall said that, unsurprisingly, the question she is most often asked at the moment is how Brexit is affecting the art market. While that may still be unclear, the emphasis from Frieze is business as usual.

But how well is Frieze representing non-Western artists and galleries? Intriguingly, the UK’s unstable position coincides with it welcoming more countries than ever before—thirty-six, to be precise, making it six more than last year. Three of these are from South-East Asia: Taipei, Seoul and Singapore. Although the number of countries coming to the fair is rising, that still means that only thirty-eight per cent of the world is represented. When the art fair calls itself international, that percentage is worth remembering (and this is on the more open side than many).

“Intriguingly, the UK’s unstable position coincides with it welcoming more countries than ever before—thirty-six, to be precise”

While it’s not possible—given the last-minute changes to exhibiting artists and information available—to give an accurate report of the representation at the fairs in their entirety, the subsidised Focus section of Frieze—designated for young galleries (founded in 2004 or later)—presents thirty-three women compared to twenty-seven male artists. In terms of artists born in Europe and North America versus the rest of the world, the split is also pretty even at Focus: thirty-six out of sixty artists were born in the West. It is also worth noting, however, that Focus is the section of the fair where prices are likely to be the lowest, since most of the artists shown there are young and emerging. The trend for diversity has yet to spiral upwards.

The figures at Focus represent a positive shift among the younger generation. However, when you look at the stats for Frieze Masters’ Spotlight section, they are disappointing. Twelve of the showcased artists are identified as women compared to twenty-six men; twenty-nine were born in the West and just nine in non-Western nations. Of the thirteen still living, six live outside the West. If anything, this reveals the skew of art history but it also suggests that not enough is being done to redress the past and bring value to women and non-Western pioneers of earlier years. Frieze Masters collectors, it would appear, remain traditional in their taste for male, Western artists.

There are some nudges towards thinking beyond this at Frieze Masters: among the Spotlight artists are Gordon Parks and Ming Smith, both double pioneers in the context of Frieze Masters, as documentary photographers and African-American artists who paved the way for black artists in the US but are rarely celebrated in the UK. Howardena Pindell, aged seventy-six, a founding artist of the groundbreaking New York gallery A.I.R, is also featured. Solo presentations by women artists this year include Rachel Whiteread, Susan Hiller, Louise Nevelson and Gina Pane.

The last two editions of Frieze have foregrounded gender issues: the sensational Sex Work in 2017 was followed up by the equally successful Social Work last year, both centred on the underrated and undersold contributions of women artists to art history and the art market in the 1960/70s and 1980/90s respectively. This year, Frieze has moved away from gender and explores a nuanced approach to reevaluating the place of non-Western art practices in the context of the Western market. “Woven” is a new themed section for 2019, focused on the practice of eight artists who address indigenous weaving and textile techniques in six different countries around the world. It is curated by Cosmin Costinas, of Para Site, Hong Kong. Costinas is, Siddall explained, someone who is “global in his outlook”. Bringing in curators who work outside the West has become an important part of Frieze’s strategy.

At Frieze Sculpture, the balance is also respectable: there are ten women exhibitors in Regent’s Park this year, out of twenty-three artists, and fourteen of those were born in the West. At Frieze Live, the commissioned artists announced at the time of writing were three women and four men; not including the late Oskar Schlemmer whose Bauhaus ballets will be restaged during Frieze. At the popular Talks programme at Frieze, the Bauhaus has also been a point of departure, but Lydia Yee, who co-organized the line-up with Matthew McLean, was keen to point out the problems the Bauhaus had with women, which will be discussed, alongside the rise of the right-wing and the place of art schools.

“Frieze Masters collectors, it would appear, remain traditional in their taste for male, Western artists”

There are other sociopolitical agendas that Frieze is seeking to address: sustainability, for instance, as Siddall pointed out. Frieze did their first eco audit in 2007 and subsequently published a green guide in 2009, and it is an issue that they have been thinking about for some time. One topic that remains still firmly off the table is class and how representative the fair is of it.

Of course, all of these breakdowns really only give us the numbers, not the nuances: an artist’s place of birth and whether they’re marked as M or F on a fact sheet doesn’t tell us how they see themselves, or the world—and nor should it. The best way to experience how diverse Frieze is, and how these differences are marketed, is to go and see for yourselves. With hard Brexit impending at the end of October, it might just be the easiest way to travel in the near future.

3 to 6 October in Regent’s Park 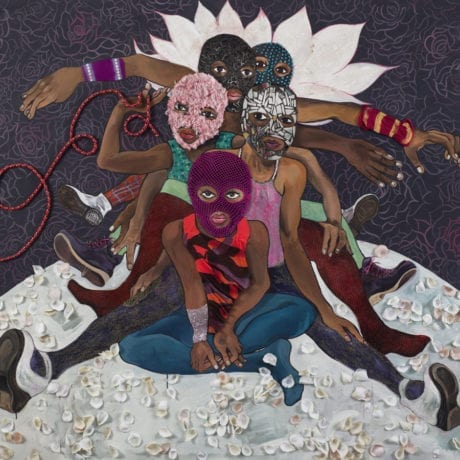