I’m sitting in a darkened room, one massive screen on either side of my vision. To my right, a CGI tiger is expressing himself in semi-operatic tones. He appears to be suspended in darkness, floating in an endless sea of black space. This is Ho Tzu Nyen’s 2 or 3 Tigers, a 2015 double-channel work that features a man rendered on one screen and a tiger on the other, exploring the mythical figure of the “Were-Tiger”, the ecological upheaval caused by British colonialism and the role of the striped big cat in Mayan folklore as the estranged sibling of the human being. The work touches on our suppression of our own nature and the cruelty we have shown to other species. Nyen’s piece is one element of Animalesque, a group show at Baltic Centre for Contemporary Art in Gateshead, which questions humans’ position in the world in relation to other species—and, inevitably, ourselves.

We recently released Elephant’s winter issue, which explores the current climate crisis and the role of nature in visual culture. For many years, artists have used animals as a stand-in for weighty themes. They are symbolic of parts of ourselves that we no longer access, of innocence and brutality, and, of course, of the damage we are doing to the planet that we inhabit.

“The ecological mess we are experiencing may be caused by human life, but it is not just ours to bear”

Animalesque, a show which is big on video art, does not always make for easy viewing—there is very little here that is cute and cuddly. Instead, the curators’ punchy presentation of animals and their use in art stirs in the gut, with moments of both violence and transcendence. The curators (Filipa Ramos and Anders Jansson) point out the fact that we are all “caught together” within the current situation. The ecological mess we are experiencing may be caused by human life, but it is not just ours to bear. As bushfires rage in Australia and images of burnt koalas and charred remains litter the news, it is clear that wild animals are experiencing much of the brunt of human activity.

Two years ago, the Guggenheim’s show Art and China after 1989: Theater of the World received a vitriolic response for some of the animal-driven works that it hoped to show: including Peng Yu and Sun Yuan’s Dogs That Cannot Touch Each Other (2003), which features two fighting dogs aggressively facing one another while chained to treadmills. There is nothing so confronting in the Baltic exhibition, but when I visited, viewers were clearly disturbed by Pierre Huyghe’s Human Mask (2014).

I’ve seen the piece once before, and it felt more unnerving on second viewing—perhaps as I was in a space specifically dedicated to the treatment and role of animals, so this part of the work felt more unavoidable. It is inspired by a YouTube video that did the rounds a few years before it was made, which shows a Tokyo café that has local authority-approved monkeys working as staff. The monkey in Huyghe’s video (a macaque; a highly sociable and intelligent species which are frequently used in animal testing) is the same as the one in the YouTube video, and she is shown “working” in an empty restaurant, dressed in human clothes, with her face covered by a mask and a wig on her head. The feel is apocalyptic. The video begins on a desolate street near Fukushima, and grey skies and rain outside the windows throughout. Over the duration of the work, she appears to become more and more agitated, wandering around the empty space and making repeated, nervous motions with her hands.

Huyghe has long used live animals in his works, and this one is particularly difficult to make peace with. Its message—human destruction and human nature, symbolized by the lost and vulnerable animal wandering around a space that appears to have been ruined by human activity—sits at odds with the very means of the work’s creation.

It does, of course, raise many questions. Mainly, is this ethical? We live in a world saturated with videos and images of animals “performing” for the camera. A quick scroll through popular Instagram accounts such @round.boys and @animsmols (both of which I am guilty of enjoying myself) will reveal videos of traditionally domesticated animals being cutely smooshed and rolled around by their owners, or wearing tiny outfits, alongside more “exotic” pets such as sugar gliders—no matter how well-intentioned the owner, the domesticity of species like this, and the illegal and violent trade that can be fuelled by the online popularity of these creatures, is certainly questionable.

“Huyghe’s work is beautiful and moving, but it is a challenge to reconcile that with the experience of the monkey”

So where do we draw the line between what we deem to be an animal just enjoying itself and acting naturally, or being stripped of its autonomy? In lots of animal content that exists online, it’s incredibly difficult to draw that line, and it is often seen as light, fun content that doesn’t really need to be scrutized. Even when the animal appears to be enjoying themselves (of course, we can never actually ask them), they are still existing within a human framework, which, it could be said, most of nature is now too.

Getting any kind of consensus on quite where the human and animal relationship becomes abusive is difficult. Huyghe’s work is beautiful and moving, but it is a challenge to reconcile that with the experience of the monkey. Does it make any difference that the experience of this particular monkey in the video tallies with its usual “job” anyway? It would still be functioning in this way without the artist’s involvement.

“Now more than ever, we are being faced with the hypocritical nature of our relationship with the world around us”

Though many of the other works in Baltic’s show rely on animation, CGI or 3D materials to bring their animals to life, the political strain is evident in every work. An enormous hippo sculpture lies splayed out in the middle of the space; part of a performance piece by Allora & Calzadilla, which was originally shown at the 2005 Venice Biennale. Performers take it in turns to sit on top of the hippo, reading the newspapers of the day and blowing a whistle when they come across something that they deem to be an act of injustice or corruption. One wonders how loudly those whistles have been blown in the last two weeks, with the UK’s landslide election and Trump’s divisive impeachment—two things that could have huge consequences on the future direction of our relationship with the environment. As the pair notes, “one person’s injustice is another person’s truth”; their positively named Hope Hippo “plays upon the variegated values held by different members of our society”.

Elsewhere in the show, Pierre Bismuth’s The Jungle Book Project (an intervention in Disney’s original animation, in which all nineteen lead characters speak a different language); Paloma Varga Weisz’s Kampfhund (a vulnerable-looking, wooden human-animal hybrid, which is dwarfed in a sea of shavings from its own material); and Annika Larsson’s text work Animal (which invites the viewer to inhabit the physicality of another species: a kangaroo) all point to the need for greater communication between and compassion for other creatures—whether human or animal.

Now more than ever, we are being faced with the hypocritical nature of our relationship with the world around us. Shows like Animalesque don’t play into the heartwarming animal content we might typically be drawn to, but they do push us up against the uncomfortable realities of our own disregard for—and lack of real connection with—the very place we call home.

Animalesque: Art Across Species and Beings 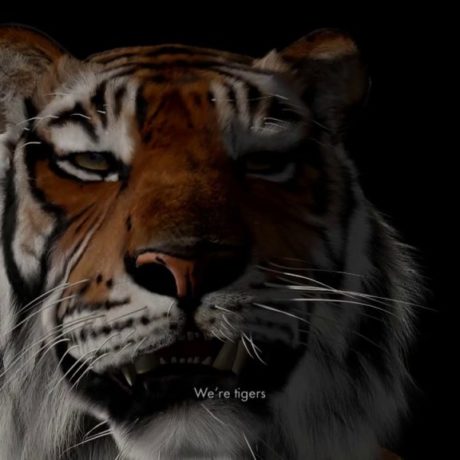