What is the purpose of a monument? It is a question that has been debated vigorously of late, as the figures that decorate our institutions and public space are put under scrutiny. In Europe and the USA, statues that glorify slave traders and symbolise an ongoing legacy of oppression have been defaced and pulled down. Elsewhere, across Afghanistan, Syria, Iraq, Yemen and more, ancient sculptures, temples and even entire cities have been irrevocably destroyed—the result of both the harrowing impact of war and a premeditated campaign of iconoclasm.

It is exactly these polarising contexts that make Huma Bhabha’s sculpture Receiver the monument of this moment. The ominous humanoid figure, standing at two-and-a-half metres tall, features arms folded in prayer, while another set stick firmly to the torso’s sides. The wide grin cut into its head could be interpreted as either menacing or jubilant.

This creature at once looks as if it has been hastily assembled and has stood for thousands of years. It could be the result of an archaeological excavation or dropped in from an alien planet; either a figure of worship or an ominous warning. While at first it seems to be assembled from roughly carved Styrofoam and cork, on closer inspection it is clearly cast in bronze. As the hulking mass of the structure reveals itself, what were taken to be signs of deterioration are revealed as meticulously painted illusions. Such a mirage points to the deceptive nature of strength and power, as well as the reflexive deference we hold for particular materials. It encourages us to take nothing at face value.

“This creature at once looks as if it has been hastily assembled and has stood for thousands of years.”

Visual contradictions also extend to Bhabha’s extensive reference points, which span antiquity to modern-day science fiction. In this case, the folded arms of Receiver share a similarity with Mesopotamian votive statues, while the enormous, slab-like legs recall the “Power Loader” suit that Ripley dons in Aliens for her triumphant final battle with a Xenomorph. By looking back as well as forward, and far beyond the western canon, Bhabha creates a unique blend of speculative fiction. It is one that questions the notion of the “alien”, and places emphasis on the discarded, forgotten and unknown.

When Receiver was first installed outside of Wakefield’s County Hall in 2019, before arriving at Frieze Sculpture Park, it appeared as an eerie figure that thrust itself among the general public, a mysterious creature in a familiar world. Yet now, as the realities of our existence shift, it appears grounded; it is currently on show at Baltic in Gateshead in the context of several other figures and a wider selection of works on paper. This family of humanoids seem to share more commonality than the people that surround them, anxiously distanced and strangely anonymous, with masks shrouding their faces. It is a stark reminder that the idea of the “other” is always relative, and our histories are never fixed; they always far more complex than they first appear.

At Batltic Gateshead until 14 March 2021 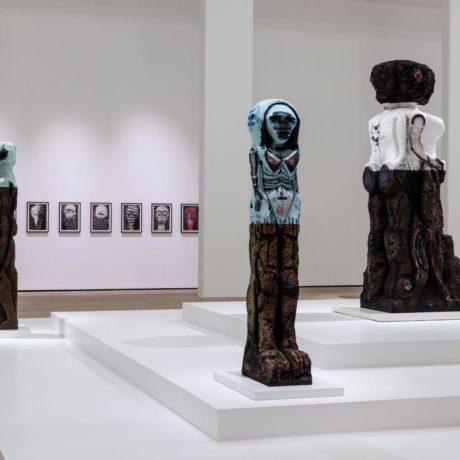