Boo Saville is a rarity among painters in that she’s both a figurative and an abstract artist. She has, in the past, been labelled as new gothic because her work has long dealt with death. As we sit down to lunch in the Newport Street Gallery in London, where she’s part of the group show True Colours with two other artists, Sadie Laska and Helen Beard, I ask how she developed such a mawkish interest.

Like many children, she tells me, she thought about death a lot. It might have been something as simple as a pet dying that stimulated her young imagination. She can’t quite remember. It’s not that she came from a religious household or believed in heaven and hell. It’s just that at an early age, she realized that at some point we’re all going to die. At art school she made a secret painting of a mass grave, like those in Auschwitz, that released something in her. Skulls, ghosts and decay became recurring symbols.

She used to go to museums to draw and just take a biro, working in layers to build up the surface like an old master painting. Butter Skunk, for example, featured biro recreations of photographs of mummified bodies found in Danish bogs the 1950s. But, more recently, something’s changed. She’s making large colour field paintings like those in True Colours that, for the viewer, create a kind of sublime immersion. In 2014 her mum died, and she was poleaxed by grief. Something changed, she says, in her vision. The way she saw the world went through a transformation.

“As I walked around it was a bit like being on ecstasy, as though all the love and emotion I felt for my mum was somehow being reabsorbed. It was really important when planning her funeral that everything was beautiful. This experience stimulated a new relationship with colour. Before I was always wary of the idea of beauty, somehow skirting around it.”

“If I’m making an 11-foot painting up on a scissor lift, I have to really believe in it”

I ask where she gets her ideas. If she’s influenced by what she reads, but she admits that she hardly reads at all, except for books on mental health or people like Fred West. “Though I do spend a great deal of time online and when I’m working I listen to playlists. I like movie soundtracks. Stuff that’s varied and emotional. I don’t have a telly. I work all the time. If I’m not working I don’t get out of bed for days. It takes it out of me. If I’m making an 11-foot painting up on a scissor lift, I have to really believe in it. It’s a big commitment. I listen to music on my earphones and paint to the soundtrack. There’s a performative element to it. I can’t hide behind anything. It’s so uncool, so uncontemporary to work like this but I just want to connect with people, to create works that bring people together and make them feel.” She likes, she says, the idea of her audience reflecting on her paintings, projecting their own thoughts and feelings onto them, filling them in with their lives.

And while working, a word, a completely extraneous word, may just float into her head such as “tiptoe” that will trigger all sort of associations and images. “It’s like drawing a map in one’s own brain.” The big paintings, though, are essentially intuitive. “I might think this time I’d like a dark one, but the process is very fluid. The paintings themselves dictate the directions that they take. But they’re hard work. I want them to look as though they’ve just appeared, not that they’ve been worked on.” She talks of them as if they were cheeses. Some, she says, are young. Others more mature.

I ask about her life. She tells me that she and her husband Adam, who’s doing a PhD, used to live in one room in a shared house. Then, after her parents died, they moved to a one bedroom flat in Margate near where she has her studio. “It’s on an industrial estate behind B&Q, between a roofer and a sign maker. Not at all trendy,” she says. She’s the only woman in the place and the only artist and has to share a communal loo. When she first moved in she found a note saying: “A lady’s moved in. Put the seat down and mind your language boys.”

“Making this work is a mix of intuition and rigorous technique”

But she loves Margate and hasn’t looked back since she left London. She starts her working day at about 8am with coffee, puts on music, checks her brushes are dry enough to work with and selects which ones she’s going to use. “I love mixing paint and I’m very obsessional about my brush-cleaning habits because they have to be super-soft and not leave any brush marks, as each layer needs to be completely smooth. Between each one the canvas is sanded and washed. So, making this work is a mix of intuition and rigorous technique”.

She doesn’t work with an assistant and does everything herself. “I don’t want another person in the room with me. I’m completely at home when making work. I’m never lonely when painting. I was on my own a lot as a child”. Has she ever wanted children? I ask. Well, it’s just not happened, she says, and work has just taken over, become more important.

And how does she see the future? “Well, I dream of being in my seventies and at the top of my game like Phyllida Barlow. I love the sense of freedom in her work but I’m still too anxious to be that free.”

So, did she know she always wanted to be an artist? “Yes, I told my mum aged six that’s what I was going to be. I had a little plastic glow worm toy—mine was an artist one—so I’ve been on that path ever since. You could say I’ve had tunnel vision. Mum was a primary school teacher and my dad did a PhD in education. We had a little primary school at home where we could draw on the walls. I put so much of what I do down to my mum. The truth is that she’s completely there in these new colour field paintings.”

So, I ask, are they a form of reincarnation, a secular form of life after death? “Yes”, she says, “They wouldn’t exist if I hadn’t lost her. I cried when I saw the show. It was like losing her and finding her all over again.”

Until 9 September at Newport Street Gallery 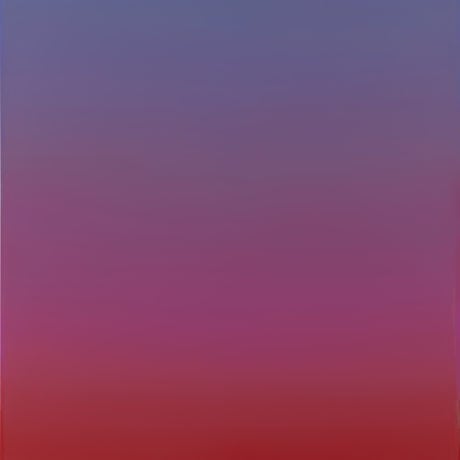