The School of Athens hangs, huge, at the back of the stage. Plato points up to the realm of ideas; Aristotle, out at the world as it is. As the title Truth or Dare implies, Lies Pauwels’s latest theatre show consistently pulls in two directions at once. Who, it asks, do we want to be? Britney or Goofy? Jesus Christ or Superstar? What sort of world do we want to make?

The fifty-year-old Belgian-born artist is a theatrical collagist. Working with ordinary people rather than professional actors, her shows set disparate identities side by side. For All the Wrong Reasons (2008) she united the soldiers and sideshow acts that populate seaside towns. In The Hamilton Complex (2017), a group of thirteen-year-old girls in gym skirts ran rings around a male bodybuilder. Pauwels uses the stage as a large human collider.

Truth or Dare brings seven young people with psychiatric disorders, ranging from selective mutism to chronic depression, together with three fashion models and a middle-aged male priest. It is, she has said, a portrait of today’s world: our inner frailties, our positive public facades and “old certainties: a spirituality that doesn’t work anymore”. The piece mashes up lonely confessions with communal sing-a-longs and sets catwalk shows against homespun costume parades. It is a performance that pulls itself apart. So, Pauwels seems to suggest, does the world.

“Either you got it, Truth or Dare seems to say, or you just don’t”

Initially, however, it looks like an illustration of life’s lottery—the luck of the draw that is being born. Teens skulk onstage in hooded black robes, heads hanging low, feet scuffing the floor. As they slide off their chairs like human jelly, the models sweep in like an invasive force. They strut, catwalk-style, around this litter of corpses: Platonic ideals of people in Aristotle’s imperfect world. Their stretched, slender shapes seem all the more startling when set against the gangly and ungainly young bodies lain prostrate on the floor. Either you got it, Truth or Dare seems to say, or you just don’t. That’s life. Cookies crumble. So the world goes. Rémy Jacobs, the priest, stands to one side. How can his God account for something so unfair?

Only the distinction’s not as clear-cut as it first seems. One model, Kim Peers, has a lank emo look. One teen is primly made up like a cover star in waiting. Can you confidently tell the two groups apart? Models unleash their innermost insecurities, while teens disguise depression and self-harm beneath accounts of alien abduction. The second they combine to rasp a ragged hallelujah chorus, it’s clear everyone onstage—models and morose alike—shares some form of exasperated dejection.

And the more Pauwels shuffles their respective vocabularies, the more Truth or Dare resists simple binary distinctions. Even when dressed in designer suits and gowns, no amount of pouting and posing can mask the anger and hurt these young people exude. Meanwhile, dishevelled grungy outfits on beautiful bodies only serve to make depressive appearances seem somehow chic, even aspirational.

Chloe Lamford’s white stage doubles as a gallery space, dotted with plinths holding stone statuettes of angels and saints, and plasticky capitalist relics like Big Boy and his burger. Raphael’s Athens is ripped down to reveal a black and white shot of a vast atomic cloud, then another of a mountainous rubbish tip. There is nothing, she suggests, that can’t become art. Everything’s commodifiable: beauty and darkness. Kurt Cobain songs clash with happy-clappy kumbayas. A punk version of My Way hollers its rage: an upbeat song defiled to express abject scorn.

Those onstage, too, become objets d’art: models as manikins; teens as avatars for emotional states. As people, Pauwels subtly suggests, we project our identities, and our public fronts affect others, whether we’re selling clothes or transmitting depression. Identity’s performative—mutism and modelling alike—and Truth or Dare implies a certain contagion. An entire generation seems stricken with angst. Pauwels’ overriding point is that these people are somehow inextricably linked. They are, at some level, each others’ cause and effect; a vicious cycle that’s at play in the world.

When a teenage girl, arms tucked into long sleeves, talks of starving herself and making herself sick, her eating disorder is set against slimmer bodies onstage. Another discusses her death wish, born of absolute hopeless in the face of the world as, around her, the catwalk’s rampant consumerism unfurls. Backed by that rubbish dump, the company strut their stuff in a series of outrageous, high-fashion outfits: camo-print ponchos, furry pink leggings, oversized shoes. Each item is worn once, then discarded, until the whole stage is strewn with crap.

Little wonder the young feel their future’s fucked. They identify with hurricanes we christen with girls’ names. They turn to a priest who cuts an isolated, even ridiculous figure. We are struck, Truth or Dare argues, in a spiral of self-harm, hooked on the consumerism that’s hollowing us out. The sheer scale of it, at times, becomes sickening.

It’s a complex piece, not an altogether coherent one. Its set pieces are always innately theatrical, but they feel disjointed and uncomfortably tacked together; too many ideas stirred into the mix. A model Tinkerbell tries to take off, as a crowd of shamans bear down upon her. A toothsome Disney Clubber in Mickey Mouse ears strums an upbeat song on her guitar. A robotic figure from the future glitches through a speech. There are dead celebs on T-shirts and lists of depressing books, zombie sailors and mimed opera, and Pauwels never quite works out what to do with her priest, beyond having him cut an isolated figure onstage.

Even so, at its best, Truth or Dare is acutely affecting: a portrait of a world caught in a trap. We might envisage the future as some Platonic ideal, a sci-fi utopia, but Pauwels makes a strong case that we’re stuck looking down.

Tours venues across Europe until May 2019 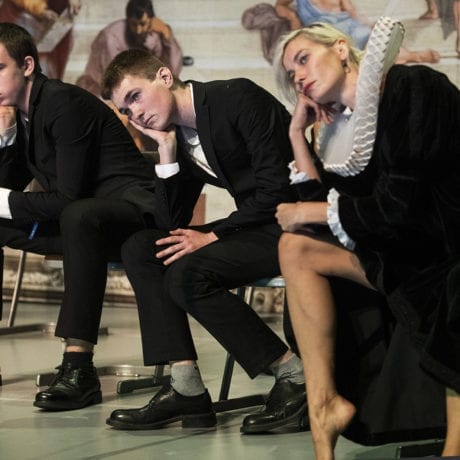