On entering KW Institute of Contemporary Art’s courtyard, visitors are confronted with Judith Hopf’s first commission for her new show, Stepping Stairs. This permanent intervention is based on John Hejduk’s Kreuzberg Tower, built in Berlin in the eighties and situated near Checkpoint Charlie, which still stands today. The original tower is basic and brutalist, the perfect monolith high-rise, apart from the hooded green window canopies which give the façade the look of Panoptes––covered with personifying eyelids. Hopf has embellished her version by painting the windows a vivid blue and adding an unfurled red tongue, which protrudes from the doorstep.

Throughout the exhibition, Hopf offers a paradoxical chasm between craft and technology. The art of Tarot tells us the symbolic meaning of a tower: it represents ambitions built on false premises. Yet pulling that card from the deck also offers us a momentary glimpse of the truth, a flash of inspiration that breaks down structures of ignorance and false reasoning. Do not assume to find grand closing statements in Stepping Stairs, but rather symbols and gestures of intuition.

Hopf continually approaches queries around the present human condition and its environment in this show, but with no definitive result. She places specific emphasis on the body, technology and its architecture. At times the audience even becomes the sculpture, such as in the film Out, where visitors must enter a black-curtained box to view the work and their disembodied legs and feet mimic the animation they’re watching, for the benefit of the rest of the gallery audience. Is this a sly metaphorical nod to the echo chambers performed online in both left- and right-wing circles? Hopf notes “I’m surprised at myself sometimes too, how much I find myself accepting things just because I read or see them.” She adds, “I’m very doubtful technology can literally change things, just look at what happened in Cairo, the class and power systems are ever-present, even after the so-called tech-catalysed revolution. But it’s so easy to be negative and complain, which is not really what I want to do.”

“I always seem to be losing content rather than gaining it, which is why I get so physical in my practice, even when I’m exploring technology.”

Hopf is not shy about making political gestures within her work, but she always speaks from a personal position. It is less preaching art activism and more eavesdropping on a politically motivated tête-à-tête. She explains, “I’ve noticed people always seem to feel like they are more informed today than ever due to technology, but I sincerely doubt that. Personally, I always seem to be losing content rather than gaining it, which is why I get so physical in my practice, even when I’m exploring technology. I have to say I’m really beginning to doubt if verbal communication is that useful in making people aware. Perhaps now is the time for much more emphasis on non-verbal gestures.”

Hopf’s work definitely edges on the side of caution, in regards to where technology and communication stand. “I don’t think of it as a huge catastrophe, but it’s becoming harder to emancipate from.” She adds, “In the fifties, Hannah Arendt already warned us that we must take care of the language we were using to communicate and it’s not only words she was talking about. We must also think about the techniques and technical approaches to language. I’m always surprised at the lack of scepticism the public has for topics like language and communication, both on and offline today.”

“Today the body always ends up so folded-up via technology.”

This exploration of language is never literal in Hopf’s work; it’s much more physical or presented as an enactment. She accomplishes this best in her film works, such as Lily’s Laptop, which sees a teen locked out of her computer, we assume due to her parents’ censorship. She is home alone, trying to hack her way in. Eventually, she gives up and instead floods the kitchen, which naturally overflows to her neighbours. In Türen, another film made back in 2008, you see an endless chasm of doors opening and closing with an Escher-esque surrealism. The German police force enters and leaves private homes, including what is assumed to be the artist’s flat. Both films implicitly offer narratives of authority, censorship and civil disobedience, within a slapstick allegory.

One of the strongest collections of objects to mirror this allegorical sentiment stand in the second room and are called Untitled (Laptop Men). The works are made up of polished steel forms that allow the viewer to imagine the devolutionary postures commonly used to surf the net. It is disconcerting to think that we are likely to contort ourselves into these positions at least once a day when doing menial tasks like checking Google maps, watching Netflix or merely “staying connected”. Hopf has the uncanny ability to look at the human figure not only from an aesthetic position but also through the lens of media history. She notes “Today the body always ends up so folded-up via technology, it’s a different mode to the old fashioned couch potato rhetoric, but in a way, we are still watching technology and it’s still detrimental to us, physically.”

Hopf asks us to question our everyday experiences and our interaction with tech: “I’m really trying to slow down all the experiences I have. When you slow things down you see other parts of a scenario, things become visible and others become obscure. Artists today are so often trying to compete with technology, but I see myself really outside of the world of tech––not only generationally but also how much I interact with it. Saying that I’m definitely part of it, you can’t escape it. So naturally, it becomes included in my thinking and my environment. I don’t go out and look for ways to emulate the gloss of technology, so my aesthetic is often quite a poor one, but I have always made work from materials I just happen to have around me. Just because I’m exploring technology doesn’t mean I won’t use clay or steel to work an idea through.”

Until 15 April 2018 at KW Institute of Contemporary Art 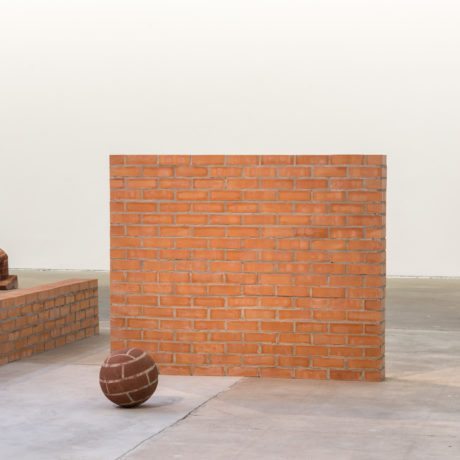