“We Japanese have kept too quiet for the last fifty years,” says composer Ryuichi Sakamoto. Best known for the haunting score he wrote for Nagisa Oshima’s 1983 film Merry Christmas Mr Lawrence (in which Sakamoto also starred alongside David Bowie), he has also authored a considerable body of other musical work, both experimental and influential, since his days with seminal electro-pop band Yellow Magic Orchestra. Sakamoto is here referring to the urgent need for the Japanese to oppose the restart of nuclear power plants (whose destruction by tsunami has had a particularly catastrophic impact on the country), but it is also a fitting declaration of intent for an artist who delights in orchestrating soundscapes.

With environmental concerns brought to the fore, and interlaced with myriad music and film references (from Bach to Resnais), the relationship between nature and art is at the centre of Coda, which begins with a trip to the Fukushima exclusion zone and an encounter with a piano that survived the 2011 tsunami: “I felt as though I was playing the corpse of a piano that had drowned,” says Sakamoto.

Stephen Nomura Schible’s film captures the musician in the wake of his diagnosis with throat cancer, and a connection is made, without fanfare, between the earth event of the tsunami, ensuing contamination and the personal catastrophe experienced by Sakamoto. Nomura Schible then documents, with great sensitivity, the composer overcoming the creative block that overwhelmed him in the wake of illness: he wants to make more music—meaningful work that will be a worthwhile legacy—and the film follows him from Africa to the Arctic Circle, through woodland walks and even into his own backyard (where he stands, alert, with a bucket on his head, the better to hear the rain’s pattering), all in search of sounds to record and amplify digitally into beguiling crescendos of lapping drones.

Throughout, Sakamoto’s debt to Russian film-maker Andrei Tarkovsky and his own “love and reverence for the sounds of things” is made clear, with some mesmerising sequences from Solaris (1967) enriching Sakamoto’s meditation about death and impermanence. It is perhaps because the film is so sober in its handling of emotions that the sight of the composer’s joyous rictus when sounds “match” and come together after patient experimentation, is so powerfully thrilling.

All images: still from Coda, courtesy the artist

At select theatres from 6 July 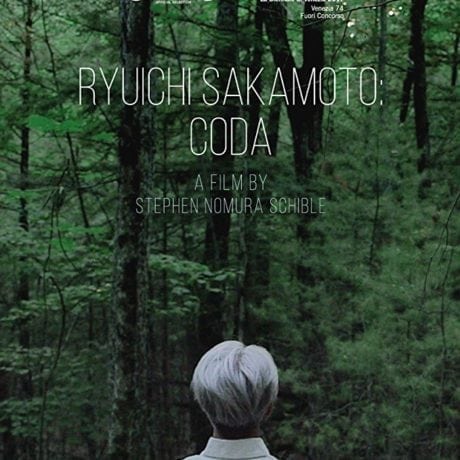