Judith Black has been taking photographs of her immediate surroundings since the late 1970s, when she moved to Cambridge to study for an MFA. She was a single mother of four children, and their domestic space quickly became her subject matter. “I quickly realized that I was not going to be able to roam the streets to make photographs,” she remembers, “I had limited time between working at MIT as an assistant, attending classes, and being a mother. Our apartment was dark, but it became my studio.” Her focus stayed on the home, documenting the evolution of these familiar elements, from intimate self-portraits taken while pregnant to the rites of passage of teenagehood. Pleasant Street, published by Stanley/Barker this May, brings together these photographs for the first time, following years of neglect of Black’s work in the wider photography canon—as was the case for many of her female contemporaries. Finally, they have been brought into the light. (Louise Benson)

New York-based artist Jesse Hlebo has co-produced and edited a new series of text-based works called Contactless Deliveries. The series comprises a number of written responses from individual authors regarding the Covid-19 situation (what else?); focusing on the paradoxical nature of isolation in an era known for its ever-advancing state of hyperconnectivity. Orchestrated by Edel Assanti Gallery, the project has taken the form of a sort of Exquisite Corpse game, with each chapter by a different author written to respond to that of a previous contributor. These texts and a spoken word-based film will be showcased on the gallery website and social media channels, with the first by Hlebo himself, released on 17 April and titled After Life a Melancholic Spring, followed by a contribution titled by Himali Singh Soin. Hlebo’s work more broadly focuses on societal power structures and methods of control, and how these are reinforced and disseminated through mass media. (Emily Gosling)

The sensual shapes and curves of Kyle Dunn’s paintings move beyond the pictoral. They stretch into three-dimensionality via carefully built-up surfaces, giving physical weight to the forced perspective he employs. At a time when so much of our connection is based on a flat, digital plane, it is refreshing to see an artist take such an experimental approach to skewing our visual perception. However, this is just one element that makes his work so compelling. He depicts intimate domestic scenes that place the vulnerable male body front and centre, dramatically lit from multiple sources and often contorted into erotic positions. His palette too, is reminiscent of old celluloid film and faded photographs, which offers an eerie sense of familiarity. (Holly Black) 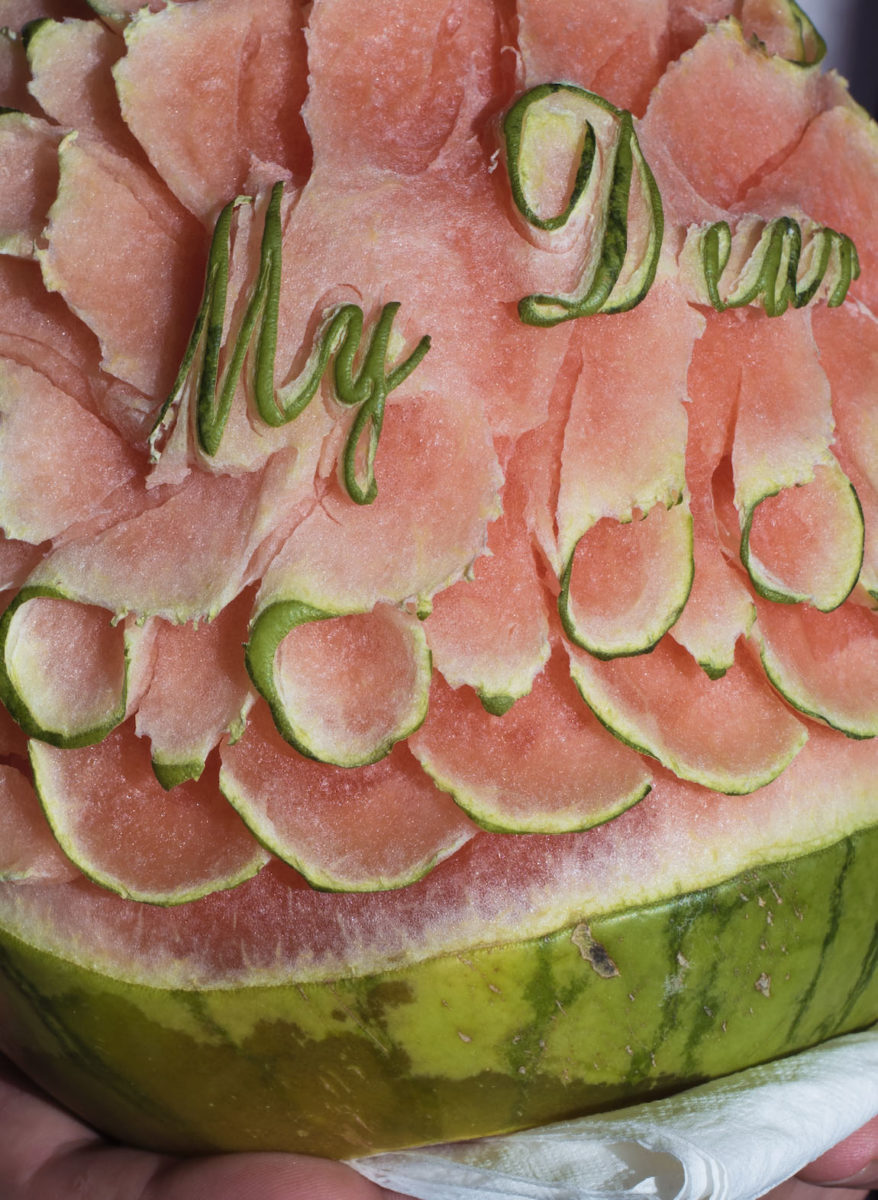 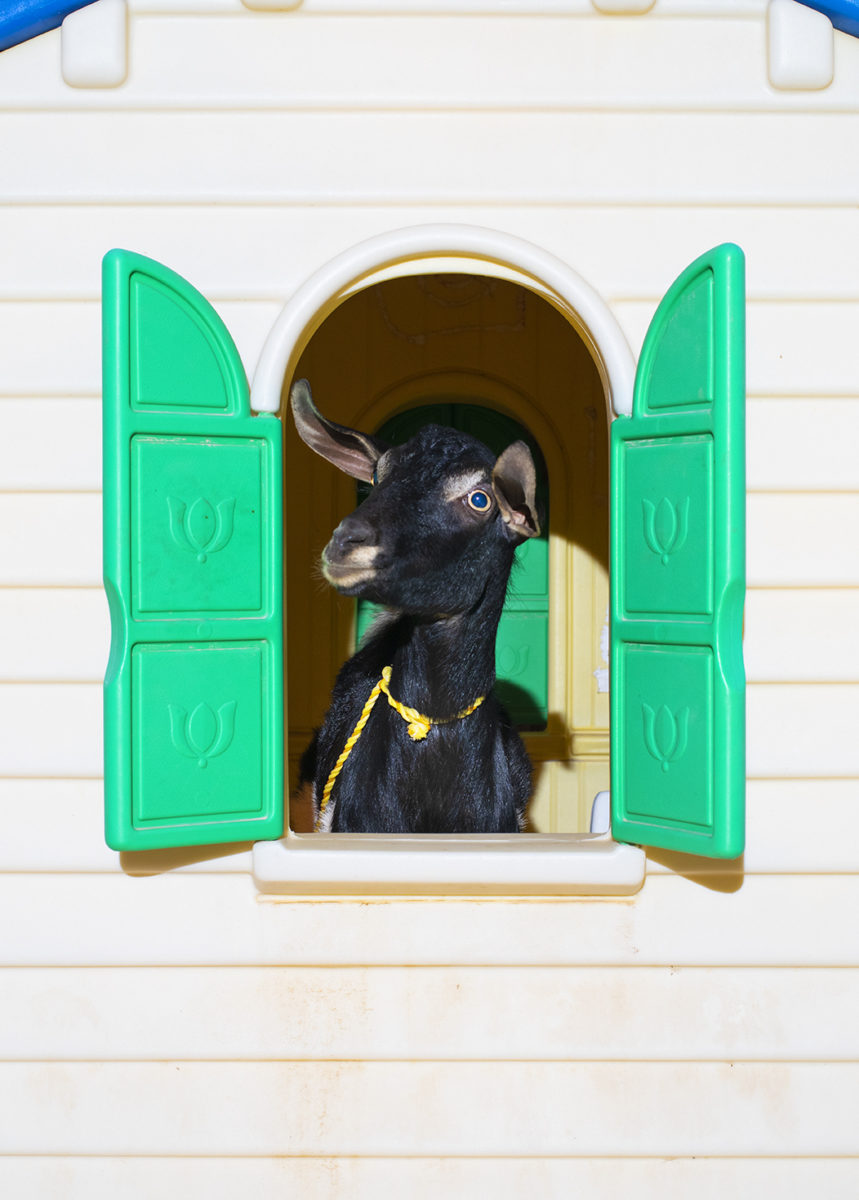 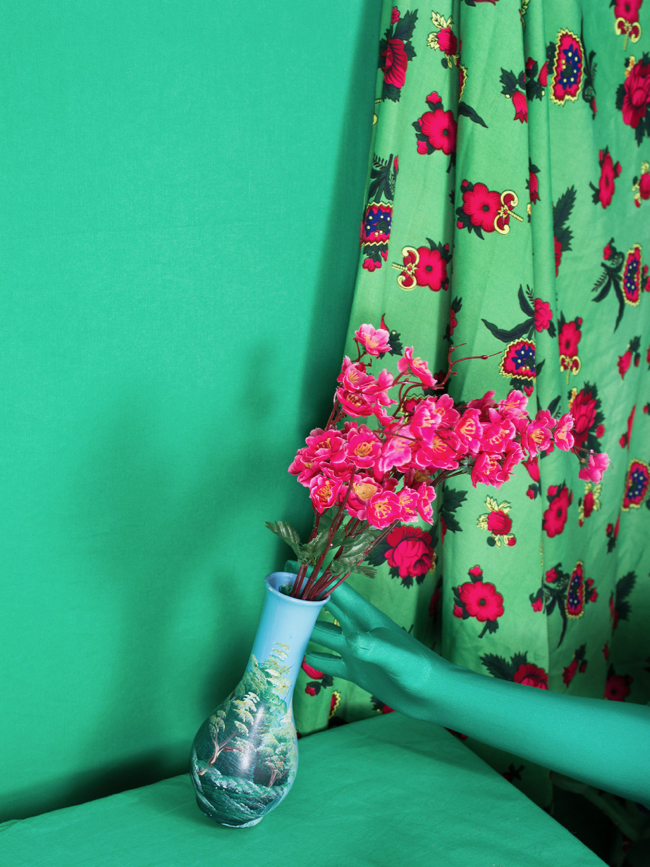 When viewed en masse, Farah Al Qasimi’s striking photographs create a high-saturation, high-contrast world that appears sometimes staged, sometimes candid, but always just a little surreal. Often depicting homes and places of commerce in the UAE and the US, the artist pays close attention to the ways in which we adorn and decorate to conjure aspirational selves into reality and form cultural identities. The gaze is drawn and refuted by richly coloured fabrics and iridescent surfaces. Al Qasimi’s current show Funhouse at Helena Anrather has been moved online, and although we can’t let our feet sink into the gallery’s orange carpet, or see the photographs in all their large format glory, they remain just as dazzling, and surprising, onscreen. (Rosalind Duguid)

Hayv Kahraman’s intricate technique and political subject matter have earned her a sizeable Instagram following, and you can currently view ten of her paintings and a selection of drawings at London gallery Pilar Corrias’ online platform for the exhibition Not Quite Human: Second Iteration (here you can also view a video of the Iraqi artist talking about her work). This series features bodies that bend in unnatural ways, while their faces appear to maintain eye contact with the viewer. In these pieces, the artist explores the idea of spectacle, showing the subject in a position that might be fetishized or eroticized, representative of, as the artist explains, “becoming what your colonizer wants you to become. Of bending so far and so extreme and yet not breaking.” Despite the physical contortions of these figures, the gaze of the viewer is powerfully returned. (Emily Steer)

Skinhead culture, with its associations with far-right white supremacists, is hardly the first topic that you might consider of interest for a queer black womxn. But Rene Matić uses her mixed media work to delve into the movement’s roots as a multicultural marriage between West Indian and white working class culture, grappling with their own place in the world as a person of mixed race identity. Working across painting, sculpture, film, photography and textile, Matić’s work attempts to bring to light the conflicts and contradictions encountered while navigating the world in a body like their own. Arcadia Missa is currently presenting a new video work by Matić, titled We Give a Lead to Britain (2020), in which they retrace the  “No Colour Bar” Dance, which occurred at Lambeth Town Hall in Brixton in 1955, where Caribbean and British couples danced together. Watch it online now. (Louise Benson)

Laura Jayne Hodkin embodies every hot-mess night out, anxiety-ridden hangover and inexplicable BFF bust-up in her witty animations and illustrations. Her characters, who are typically young women sporting fashion-forward ensembles and fabulously fleshy figures, manage to convey all of the realistic trials and tribulations of everyday life, while simultaneously inflected with surreal absurdity. In her Royal College of Art graduate project Hot and Tasty, for example, Hodkin features two drunken friends vying for fried chicken and cheesy chips, while seemingly unaware of the poultry-initiated murder taking place in front of them. More recently, she’s captured the banal elements of isolation with a Lara Croft-inspired animation encouraging good hygiene, and hilarious drawings that include a young woman all dressed up for a Zoom date, and another succumbing to DIY beauty tutorials. (Holly Black)

Sanam Khatibi’s paintings, in which nude figures frolic and fight in wild landscapes, contain feelings of both liberation and menace. The above piece is featured in Timothy Taylor’s current digital show Dwelling Is the Light, which is curated by Katy Hessel. The painting features male figures, rather than Khatibi’s usual female-only compositions, and (perhaps not entirely unrelated) this piece is also more violent. From nude older women lounging and picnicking lakeside while surrounded by dogs, to skeletal Death figures wandering through barren landscapes, Khatibi’s works capture the romance we attach to the outside world, as well as nature’s more brutal elements, with heated tension and numerous nods to art history. Head to the artist’s Instagram account to see her new tapestry. (Emily Steer) 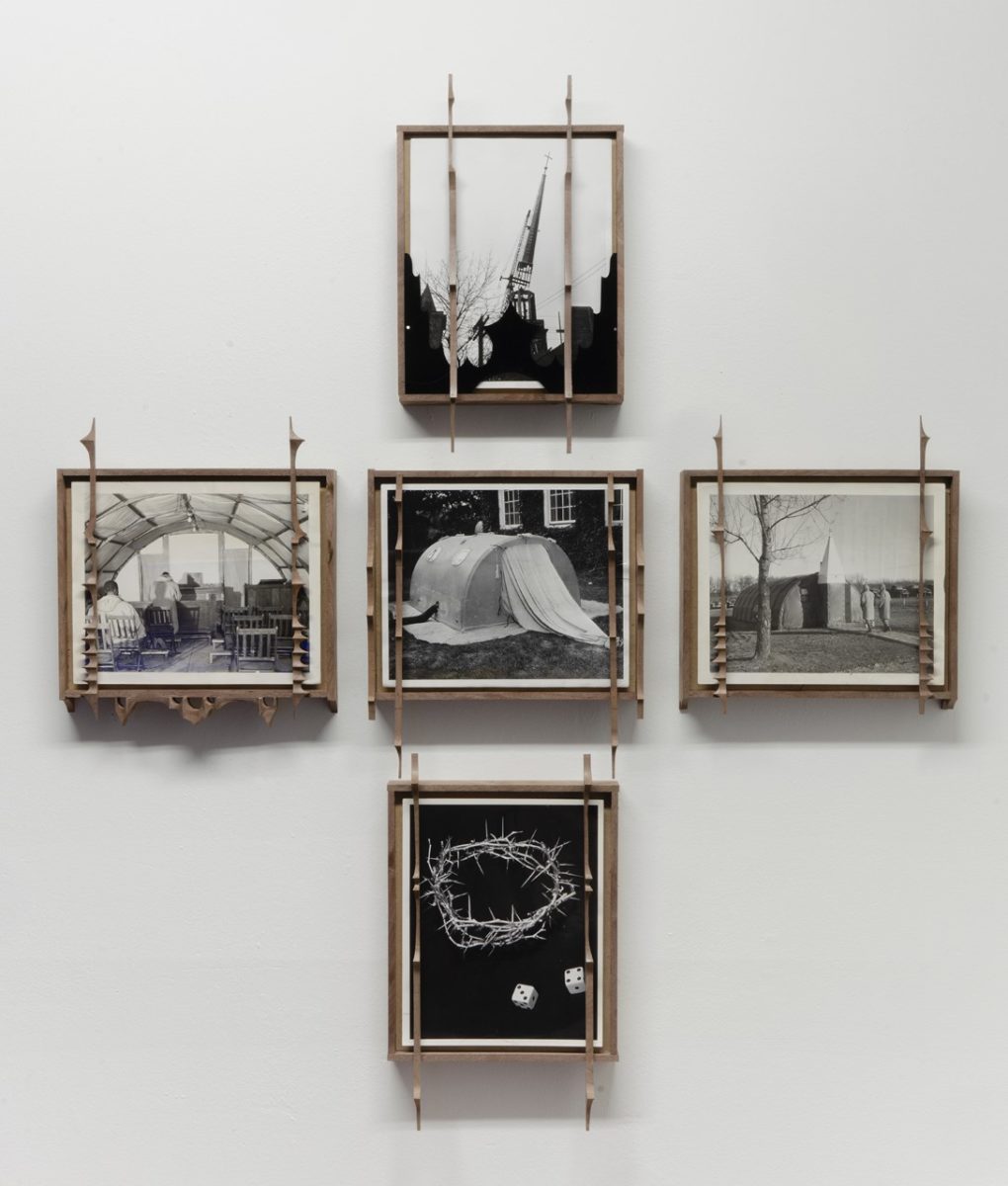 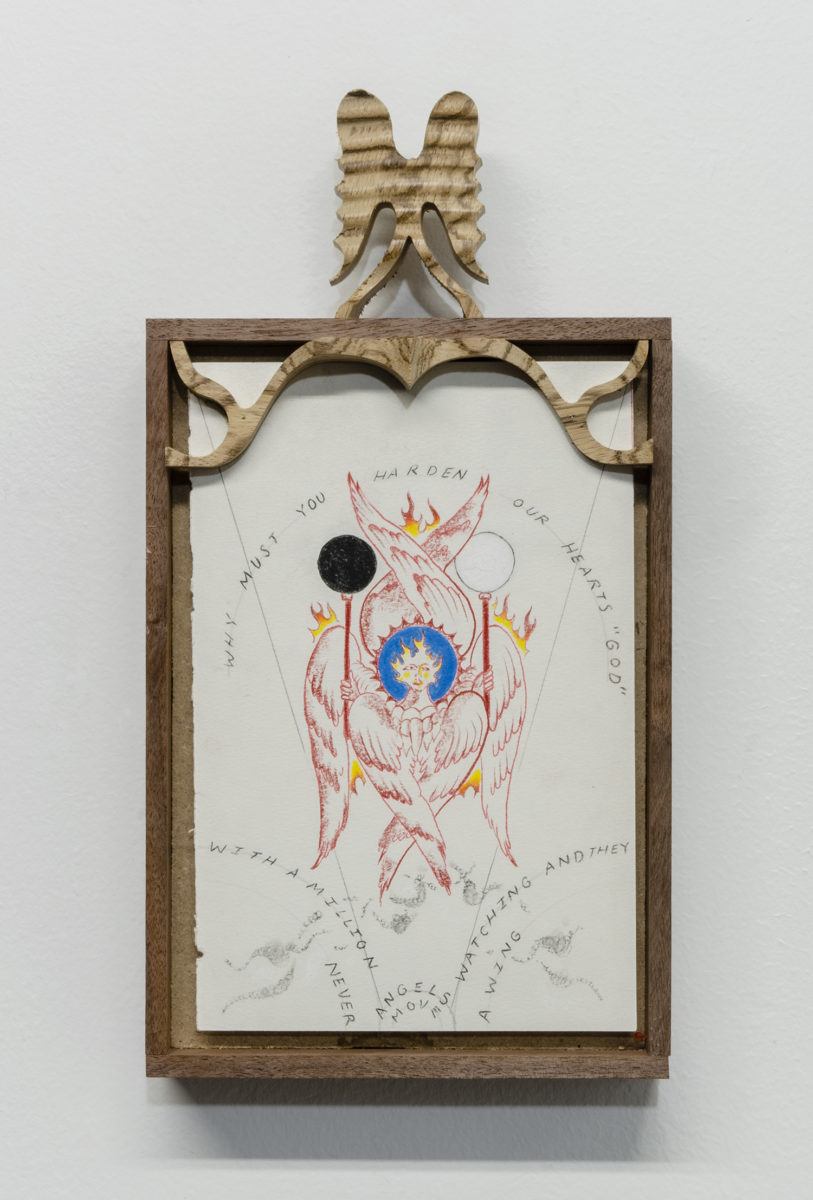 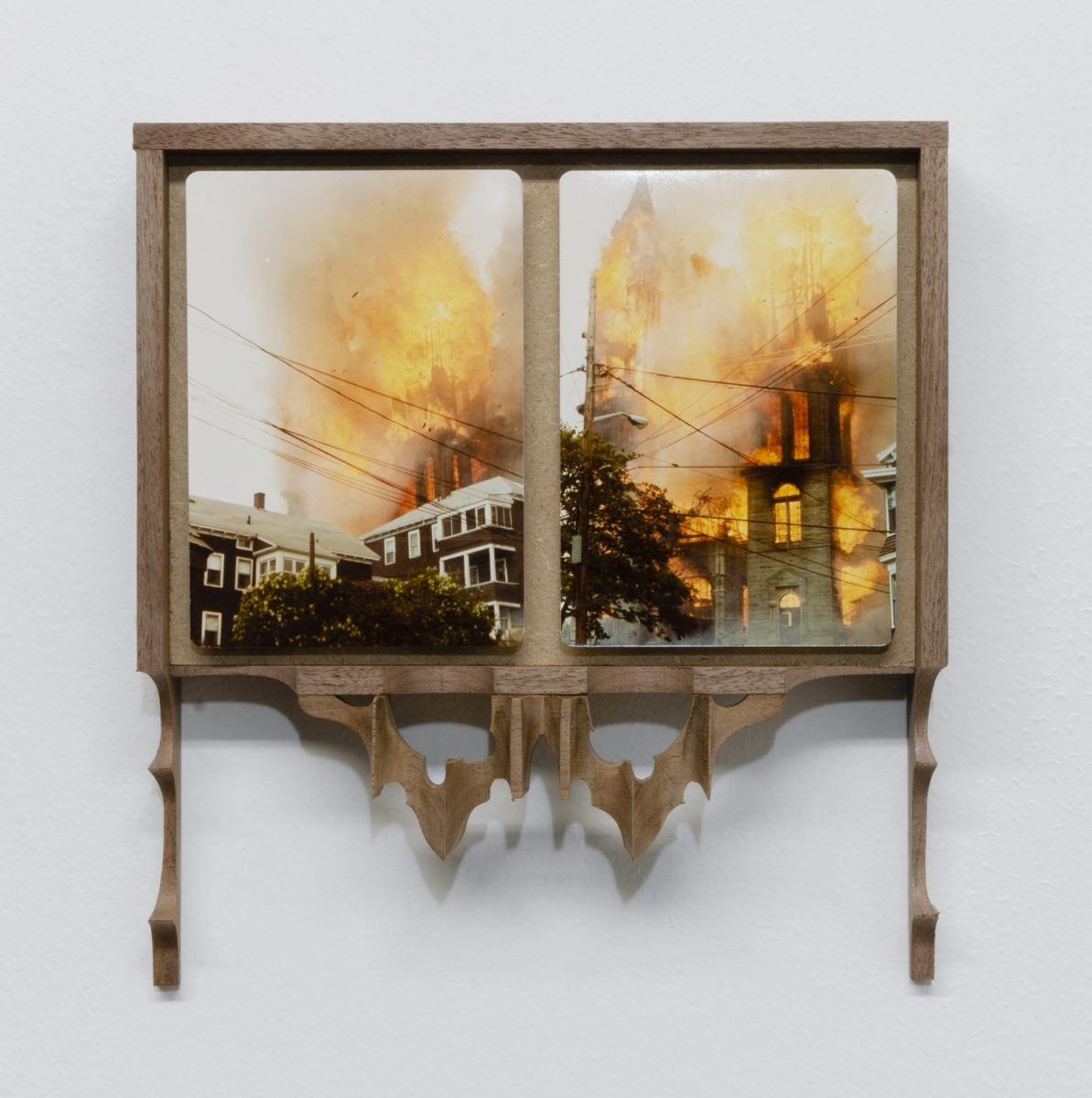 Harry Gould Harvey IV’s practice delicately pieces together drawings, foraged wood, metal, wax and found imagery with a kind of ritualistic energy. His sculptures appear like spiritual offerings, or sometimes miniatures of forts or castles; his drawings often contain diagrams and notes that read like much needed prayers, guidance or lamentations. His show “And the Light is Forever, And the Light it is Free, currently online at Bureau Gallery, takes its name from a Quaker song about the endurance of belief. In this body of work Harvey frames drawings and found photographs—some of quonset huts being used for shelter and worship, and some of the Notre Dame church in Fall River burning down—with spiky ornamental frames carved from black walnut. The works feel at once brimming with darkness and light, confusion and faith. (Rosalind Duguid)

Yemen-born,London-based film director and artist Reman Sadani, who graduated from The Slade in 2018, has had some good news, for a change as recent times go, having been one of the two recipients of the Jerwood/FVU Awards 2020, themed Hindsight, alongside Guy Oliver. Awarded £25,000 to develop her moving-image work proposal Walkout 1, the artist’s work-in-progress presents an unidentified freak weather event that sees a cloud of sand settle over a city and all but choke its inhabitants. Described by Jerwood Arts as “part physical theatre, part workshop polemic”, Sadani’s film “dramatises the emotions and tensions of what comes to be recognised as an unmistakably pivotal moment, where power is broken down, and allegiances start to shift.” Sadani’s recent work has seen her create film and written pieces with a loose collective of independent Iraqi filmmakers, with whom she toured Malmö, Carthage and Marrakech Film Festivals in a series of development labs. (Emily Gosling)