Since the last presidential elections, the responsibility on American arts spaces to provide a stage for rigorous debate has undoubtedly increased. However, despite the effort of major art institutions from coast to coast to tackle the problem from the vantage point of culture, few cities in the US can top Chicago as a platform for social and political engagement (fun fact, its oft-used nickname the “Windy City” is often attributed not to the weather, but to all the hot air coming from its politicians at the time the phrase first took off). Here, an art fair like Expo Chicago is much more than a commercial event for local and international art. “The intellectual capacity here is very high, thanks to the amount of energies that can be spent on criticism and scholarship,” explains Stephanie Cristello, director of programming for the fair, editor in chief of the critical magazine The Seen and one of many alumni of the School of the Art Institute of Chicago (SAIC) who decided to get involved in the local scene after graduation.

The seventh edition of Expo Chicago opens to the public on Thursday at the historic Navy Pier and features some 135 international galleries—including major players from the New York City area like Luhring Augustine, David Zwirner and Bortolami. Many of the galleries engage with political matters, which translates into an unusually broad space in which to consider diversity, artistic activism, climate change and the globalized economy. The fair also engages with the local scene, which bustles with galleries and museums, including the Art Institute of Chicago, the Museum of Contemporary Art Chicago, the Renaissance Society and the Graham Foundation. Looking into the curatorial programme of Expo Chicago, one finds In/Situ, a selection of large scale artworks presented by the galleries inside and outside of the fair, for which Cristello has worked closely with Pablo León de la Barra, curator at large for Latin America at the Solomon R. Guggenheim Museum in New York.

“The focus is on migration, otherness, feminism and gender, but the scope is not limited to the US and acknowledges the connections across the Americas,” Cristello says. Visitors will find one of the twenty-six floating balloons that formed Repellent Fence (2015), a two-mile-long land art piece from the artist collective Postcommodity, originally installed on the US-Mexico border. Also on view is Cartoon for the Fall from the Holocaust Project (1987), a drawing of a pioneering work by Judy Chicago that resonates today, as America sees continued episodes of anti-Semitism and violence against women. Finally, My Father’s Side of Home (2014) by Carmen Argote, an immersive series of wall drawings exploring notions of home and belonging in relation to architecture, marks the first presentation by a Colombian gallery, Instituto de Visión.

The Dialogues programme, a primary research tool for art students launched in partnership with SAIC, offers a chance to delve into the work of Chicago-based photographer Dawoud Bey. The focus will be on Night Coming Tenderly, Black, his new commission on the Underground Railroad for Front International, the Cleveland Triennial for Contemporary Art, which will be on view in its entirety at the booth of Rena Bransten Gallery. From the scars of slavery to the ramifications of the Aids crisis, the artist Lola Flesh will be speaking with art collector and HIV physician Dr Daniel Berger and the artist John Neff of Iceberg Projects, who also happen to be co-editors of the exhibition and publication Militant Eroticism: The Art+Positive Archives. Another moment not to miss comes courtesy of AfriCOBRA (African Commune of Bad Relevant Artists), whose work is currently exhibited at the Smart Museum of Art, at the DuSable Museum of African American History and at Kavi Gupta Gallery in Chicago—not to mention the main feature in the touring exhibition Soul of a Nation: Art in the Age of Black Power, which recently opened at the Brooklyn Museum in New York.

AfriCOBRA’s momentum in its fiftieth anniversary year comes at a time when the Art Institute of Chicago is celebrating the legacy of Hairy Who, another counter culture collective that formed a subsection of the broader Chicago Imagists group. “Coalitions such as AfriCOBRA and Hairy Who are an important component of the Chicago scene and American art in general, and it’s time to correct history in order to look forward,” Cristello tells me. A conversation with leaders of the two art collectives will be held at Hans Ulrich Obrist’s Creative Chicago: An Interview Marathon, on 29 September at the Aon Grand Ballroom of the Navy Pier. The stage for the marathon has been designed by Barbara Kasten, whose photographs and videos investigate space in modernist architecture. “Chicago has a vibrant scene. Artists like Kasten, Kerry James Marshall, Theaster Gates and Amanda Williams are references and mentors to new generations of artists,” continues Cristello.

While over the past few years the gallery scene has clustered in West Town (“the gallery district”) with names such as Rhona Hoffmann, Richard Gray Warehouse and Monique Meloche paving the way, gallery apartments continue to pop up across the city. “The outbreak of alternative spaces at the end of the 1960s runs parallel with feminist history,” explains Cristello. “Left out by institutions, women decided to organize their own exhibition spaces such as ARC.” Today, these art spaces are experimental yet transient, most of them hardly last more than two years—with the exception of Julius Caesar, which is celebrating its tenth anniversary. Cristello herself owns an “art garage” called Chicago Manual, and she has prepared a collective show with Iván Navarro, Robert Chase Heishman, Ansi and Kay Rosen for which she literally had to “drill a hole in her kitchen”.

From 27 to 30 September at Navy Pier, Chicago 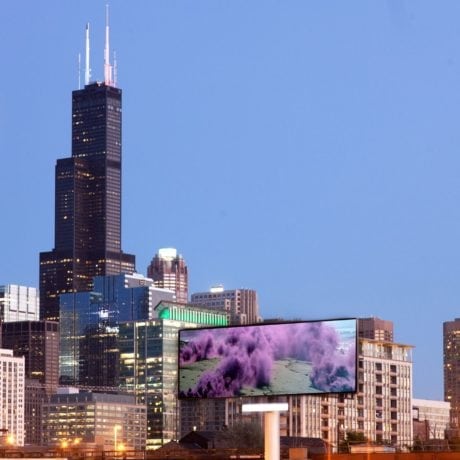