Anna Liber Lewis is a London-based painter, who has earned numerous accolades for her vividly bold and wry fine art, including the Griffin Art Prize (now the Elephant x Griffin Art Prize) in 2017. Kieran Hebden, aka Four Tet, is an electronic music visionary (who also previously co-founded the group Fridge), with an extensive catalogue that spans numerous albums including 2017’s New Energy, atmospheric club compilations (FabricLive; DJ Kicks), and collaborations under his own name with Steve Reid. The pair have also been life-long friends, and their deep-rooted dynamic fuels Muscle Memory: a new exhibition of Liber Lewis’s art soundtracked by exclusive Four Tet music, in our pioneering London project space, Elephant West: a former petrol station transformed into an exhibition/live event hub. I spoke with the pair ahead of the opening.

Can you tell me a bit about how you met?

Kieran Hebden: Anna was my next-door neighbour in South West London; our parents were friends, and we were born within a few months of each other. We went to different schools—Anna was in the year above me—but when we were teenagers our worlds and lives connected, separately from our parents. Anna was the first person who played me a Nirvana record. For my thirteenth birthday, she took me to a Mudhoney gig; this was the first time we went to live music without our parents—we were in the thick of the moshpit, and it was wild!

Anna Liber Lewis: Kieran has been a permanent fixture of my life. My memories are of being in and out of each other’s houses: lots of music, food and running around London. When you’ve known someone that long, it’s like: Is that a dream? Did that really happen? I think I took Kieran to a Prince gig on a leash once…

KH: Anna did get me to wear this fishnet bodystocking once, to go to a Prince concert! She would always want to dress me in crazy clothes. Whereas I got really into tie-dyeing, or I’d turn up at her house with this hair wrap I’d got at Camden Market; she’d roll her eyes and say: “That’s not stylish!” But we were both interested in visuals, and we were willing to do quirky and different things.

“I also really wanted to be a painting geek, because when I’d originally been at Saint Martin’s in the nineties you were really discouraged from painting”

Looking back at these shared passions for music and art, was it obvious what you’d grow up to become? What were your early impressions of each other’s work?

ALL: Art for me was a coping strategy—being able to focus as a child and go inwards. For my GCSEs, I remember taking photos of Kieran in a side-alley of my parents’ house, and doing this cubist portrait of him. I think I also sang in Kieran’s first band when we were kids; I was so shy, I could barely get on the stage. I’m a touchy-feely person who wants to talk about my emotions, and he’s quite direct. I also have this Eastern European heritage on my mum’s side, with a certain amount of doom and gloom; Kieran was very wide-eyed and up for it, and a lovely person to be around.

KH: At the time, we weren’t talking about what we wanted to do with our lives. I studied Maths at university, and when I told her I was leaving college to make music, Anna was maybe a bit surprised.

ALL: It was amazing seeing Kieran rise with his music. I’d be down the front of his gigs, jumping up and down, trying to make him laugh.

KH: Anna was getting into different work, and she also became a parent earlier than I did. As soon as I started doing concerts, she’d come to them, and I started seeing her from a different angle. When she was in her mid-thirties, she went back to art college and had a great time. I’d visit her when she was at college, and remember how exciting and interesting her final show was. She’d started creating these large-scale paintings, and it was the first time I got a real sense of what she was doing. I was a bit like: “Anna, why is it all penises?” When you looked closely, these moody colours looked like a Rothko, then you’d stand back to see a massive picture of a penis…

“I’m very happy that what we’ve brought out of each other is confidence; there haven’t been any moments where we’ve been unsure of the style”

ALL: When I was in the midst of this very passionate relationship at college, painting felt like sex. I went back to study at the Royal College of Art, I’d met someone who became my muse, and I was thinking about the female gaze, eventually turning the lens on my own body. I also really wanted to be a painting geek, because when I’d originally been at Saint Martin’s in the nineties, you were really discouraged from painting; it was deemed very unfashionable. In many ways art school hadn’t changed, which I found hilariously reassuring—but this was a moment of real emancipation. It also came after many twists and turns; when I was pregnant, I’d worked for the Arts Council and managed community outreach projects. Then as a parent, I’d trained to become a school teacher, and I’d written a children’s book. And I had this moment where I thought: “I have to paint.”

My parents kindly gave me a room in their house, to use as a studio. My mum has a lot of Ukrainian embroidery and Soviet stuff, and I would put these objects together and paint them. I had to paint through my past, through my body, and into my own space.

Muscle Memory at Elephant West represents the first time you’ve really worked together, after a lifetime of knowing each other; what sparked this creative collaboration, and what was the experience like for you?

KH: When the idea came up a couple of years ago, it did seem inevitable; I think we’d just been waiting for a way that it made sense. Anna told me that she had started listening to music in the studio more, and the obvious thing was that I would make music that she would listen to while she made art. She was interested in themes that referenced our teenage past; we’re both nostalgic about that time and, like her, I lean towards more emotional and melancholic depth in my work. What’s being evoked here is the joy of how good that time was, and the melancholy of a time that’s gone.

ALL: This collaboration felt really natural; it happened organically through communication. I was looking to change direction, and music and the act of dancing in the studio had become completely vital. I’d drive to the studio listening to music that we’d grown up with, like old-school jungle; I’d get there and dance so that I could feel the blood rush to my fingers—I’d feel physically present, and I’d paint. I had to look at my internal landscape, and Kieran’s music is great for that because it’s so expansive.

“When the idea came up a couple of years ago, it did seem inevitable; I think we’d just been waiting for a way that it made sense”

KH: Anna would send me pictures of how things were going and ideas that had struck her, and I’d compose music on my laptop. I just called the first track Anna Painting, and it’s very evocative of the parties we’d gone to in our youth. There’s another track that’s even more extreme techno, and then it’s offset with a more orchestral, ambient, almost fragile-sounding piece; I was struck here by a particular painting of Anna’s, called Breath, with pastel shades and quite a different tender feel.

We both lost our fathers over the last year, while we were working together, and the last time that I saw Anna’s dad was at my own father’s funeral. Maybe that experience of loss is another reason to have a very powerful, emotional piece of music here. We were already connected when we experienced the grief, and I’m glad that we had this thing that was keeping us close.

ALL: When my dad was dying, I took several months off while I was caring for him, I stopped painting and started drawing. Watching someone die, there’s a kind of transcendence, an alternate reality. I found it too painful to listen to the original version of Kieran’s Anna Painting track, because it was so evocative. Kieran changed it, and added a driving beat—when I got back to the studio, I could angrily dance through it, and angrily paint. Maybe the feelings made me engage with the paint more; I would feel colours, listen to the surface. The images made themselves.

KH: Anna has done things that really surprised me. She worked with an animator to create these science-fictional textures in another piece, which was partly inspired by a whale’s skull; she’d been spending a lot of time at the Natural History Museum. And I think we’ve pulled each other into slightly different realms. I’m very happy that what we’ve brought out of each other is confidence; there haven’t been any moments where we’ve been unsure of the style.

Muscle Memory will include performance programming; how have you approached such intimate inspirations as a live/public experience?

KH: I want the exhibition to be the only place you’d hear this music for now. I like the idea of making a journey to hear it. There will be headphones available in the gallery, because that reflects how Anna would listen to music in her studio.

ALL: It’s been brilliant working with the curator Becca Pelly-Fry, and as soon as I walked into Elephant West, the space did remind me of raves. I’ve also been collaborating with BalletBoyz for Muscle Memory performances; they’re just gorgeous, open people. In the same way that I’ve painted with my guy, I’ve met people and clicked with them in a kind way. I’m going to find it hard to stand at the private view and not sob my heart out.

From 18 January to 17 March at Elephant West, London 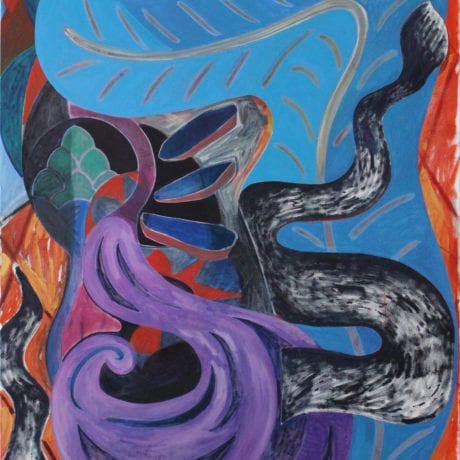