At once surreal and strangely comforting, GaHee Park’s scenes offer a contemporary alternative to historical depictions of domestic interiors. The New York-based Korean artist uses her distinct, theatrical painting style to create insular worlds peppered with sexual intimacy, elaborate dinners and a menagerie of pets and plants. At a time when the rules of community and communication are being rewritten on a global scale, her interpretations of life behind closed doors couldn’t be more prescient. I spoke with the artist via video chat, as the pandemic had just taken hold in the US. She was in the midst of creating work for a show at Perrotin gallery, which opens next week.

Do you feel that the period of self-isolation this year had an impact on your work?

Yes, I could not work at all for a week because I was digesting what is going on. Neither my husband nor I are American, so it made us even more anxious. We were spending time on the internet, making plan B and C etc. But I’m settling into more of a routine now. I moved a small amount of art supplies from my Brooklyn studio to my apartment and since then I’ve been working on small paintings for my upcoming show at Perrotin, even though I originally planned to make large pieces. My work often depicts internal spaces and intimate scenes, so focusing on this isolated living helps me to be inspired, in a weird way.

We all need a support network to thrive, whether during a crisis or in the everyday. Are you part of a strong artistic community in the city?

Being in New York is truly amazing as a female painter. People are very open-minded and welcoming. For me, the most important thing for developing my work is psychological support from the community, and the inspiration stemming from many powerful women artists who are leading the art scene, being great teachers and encouraging young people to speak up.

When I lived in Seoul, there were no strong female artist figures around me. I did not like the structure of the school system there, where the professor is king. I couldn’t even imagine what kind of artist I could be there, the scene was absolutely male-centric. I think this has been improving in South Korea recently, as there has been a wave of feminist activism from the younger generation of women.

Here’s an analogy: when I was growing up, I had bigger feet than most Korean girls and it was hard to buy my size, so I had to wear shoes that were too small for me. When I moved to America in my twenties that was no longer a problem, and it was as if I saw my feet starting to grow. I like to think about morphology in my work—transformations or distortions that are both physical and imaginary.

You have previously mentioned that you felt free to create sexually explicit images in the US, which might be misjudged by a South Korean audience. Why are you interested in creating these intimate images? And why do you think they might be ill received elsewhere?

When I was growing up, sexuality was portrayed as very unacceptable for women to express. As a child, I drew some sexual images, but my mother found them and burned them. After that, I had to create them secretly, which really excited me and made me more invested in them.

During my youth I was sexually harassed a lot. I was often touched by old men on the street and subway. And teachers could still physically punish students. When I was a teenager, for example, one of my male teachers would spank us with baseball bats if we misbehaved. Another would obsessively cut students’ hair with scissors as a form of punishment.

In the US I took lots of art-history classes and felt uncomfortable about the ways female figures in paintings have always been sexualized and objectified by male artists. At the same time, a lot of students and professors were questioning this, which was inspiring. I wanted to find a way that reflected my experience and my own gaze in my work.

Because of the memories of Korea, I was a bit scared to show there. But last year, I participated in a group exhi- bition about feminism at Perrotin Seoul, then had a solo show there too. I got very positive support from local people of my age. It was pretty therapeutic, and it was encouraging to see that things are becoming more open there.

You often include spectral shadows or perhaps an unexpected hidden hand, as if a mysterious or unconscious guest has entered the scene—what is going on here? Is there a concrete narrative or just the suggestion of something unusual?

There’s often a loose or partial narrative in my mind for a painting that guides and informs me as I’m working. But I’m not necessarily trying to make the viewer see the same story. Sometimes I tell my husband what is going on in a painting I’m working on and he just laughs and responds, “What!? No one would ever know that!”

But I don’t always know exactly what certain elements mean in a narrative sense. Perhaps that weird shadow or unexpected hand is a memory or a fantasy… or maybe there’s really someone under the table! The work has to be able to satisfy multiple possibilities, but still instinctually make sense, for me to be happy with it.

Yes, when I was first in the US and my English wasn’t so good, I felt kind of invisible or ignored. My point of view felt almost like that of an animal or house plant, just mutely observing people, understanding what was going on in an abstracted, removed way. I like to put that perspective in my work sometimes.

Food and drink have always been important to me in daily life, especially now in quarantine! I love to cook and drink good wine or cocktails. It still feels intimate and kind of animalistic, while also being social. I guess it’s those contrasts that intrigue me: intimate, social, savage, civilized, personal, familial, universal, all at the same time. 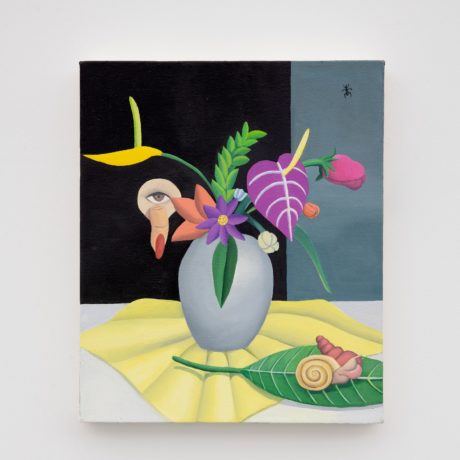