Shrouded in darkness, illuminated by a lone candle, the mother-and-child figures in Mat Collishaw’s Single Nights series look—at least on first glance—as if they hark from an era long since passed. However, on closer inspection the painterly chiaroscuro is revealed to be photographic in making, and the subjects are not Biblical visions as favoured by the Old Masters, but the residents that surrounded the artist’s former studio in Bethnal Green.

“You would see a lot of single mothers around the surrounding estates, who probably had a baby pretty young—teenagers,” says Collishaw. “I was thinking about these solitary, lonely mothers who were stuck at home with their kid while their mates were going out clubbing. If you’re isolated with a baby or toddler things can start to spiral. It can be sweet and tender, but also a very fraught situation.”

Collishaw’s images quite literally paint these young mothers in a new light. So often demonized by society (who can forget Boris Johnson’s diatribe against women who bring up children single-handedly), here they are treated with compassion and dignity. The beauty inherent in these portraits creates an air of peace and contemplation, as if each parent is enjoying a moment of nocturnal respite, where the pressures of everyday life are suspended, if only for a moment.

It is telling that George de La Tour’s candlelit portraits of Mary Magdalene are directly referenced. Christ’s follower has been branded as everything from a celibate nun to a repentant prostitute, fulfilling the narrow roles historically assigned to women in an effort to remove and discredit their agency. Similarly, Collishaw’s subjects are too often marred by narrow expectations and disapproval, while they attempt to grapple with the very real, often lonely struggles of motherhood.

By creating his own versions of Baroque allegory, the artist conceives a relatable story. He has long been fascinated by historical paintings that depict the Madonna and child, yet he believes that their power comes from more than their proximity to divinity. “It struck me that these pictures really resonate. Although they are sacred, because they depict the divine spirit of God, I think it’s more than that. They are a portrait of a universal and timeless syndrome, of a mother nursing a baby in to life—that’s always a sacred moment.”

Collishaw’s contemporary pictures wrench this well-known religious motif into the twenty-first century, evoking deference not for eternal Christian icons, but the unknown mothers and their babies, who so often find their stories vilified or ignored.

Works from the Single Nights series are on display at Inspiration—Contemporary Art and Classics until 20 September at Ateneum Art Museum, Helsinki 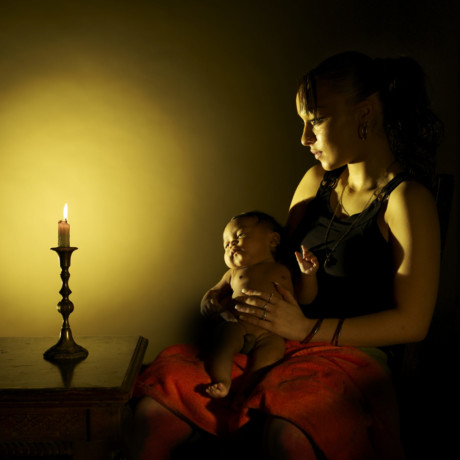