The Krakow-based artist has a knack for bringing out the darker side of everyday life. Her large-scale paintings and drawings explore the human figure in all its strange intricacies and activities, ranging from erotic desire to violent rivalry. Female self-image comes to the fore, recycling and reincarnating pop cultural tropes, from selfies to mass-media advertisements. At the age of twenty-eight, Jablonska has already built a name for herself as part of the new painting movement in Poland, featuring last year in a major group show at Warsaw’s Museum of Modern Art, titled Paint, Also Known as Blood. She also operates a gallery and publishing house in Krakow alongside a number of artist collaborators. She has just opened a new exhibition at Zeller van Almsick in Vienna. (Louise Benson)

Laia Abril’s astounding project, A History of Misogyny, begins with her remarkable research into abortion practices around the world over the last century. Part photo-book part-documentation, Chapter One: On Abortion is an unprecedented and fearless look at what women and their bodies have been through and the devastating impact of illegal abortion and the cultural taboo around it. Abril’s project could hardly have come at a more poignant time, and this month the Spanish artist will present it in the US for the first time as an exhibition at New York’s Museum of Sex. The exhibition is organized by the museum’s curator Lissa Rivera in support of women’s reproductive rights. (Charlotte Jansen)

Ana Benaroya also creates larger than life figures in her drawings and illustrations, depicted in giant-like proportions, with mammoth hands and feet looking as though they could crush the viewer. Her women are powerful and muscular, with enormous breasts and rock-hard nipples that subvert their typically soft and playful presentation for the male gaze and instead embrace something far more gutsy. In her work, breasts are humorously shown as body parts that can wilfully be moved, whether squirting paint out of the nipple onto a waiting canvas or bending at ninety degrees from the body to play piano. The NYC-born artist has a show opening at Richard Heller Gallery in Santa Monica in the middle of February. (Emily Steer)

There is something weirdly kinky about Hannah Levy’s sculptures. The artist uses steel, rubber and silicone to create works that seem to reference austere, minimalist furniture on first glance, but are in fact imbued with animalistic qualities such as clawed feet, or strangely suggestive curved lines. These unnerving combinations could elicit a chuckle or a shriek, depending on your sensibility, as each object appears as if it might jump up and run away, or maybe even grab hold of you. They are both sexy and violent; tactile yet sterile. Levy refers to everything from medical equipment to vegetables as a source of inspiration, as well as the surreal sensibilities of artists  such as Louise Bourgeois, Eva Hesse and Meret Oppenheim, whose sculptures elicit erotic, bodily concerns. Levy’s current exhibition Pendulous Picnic at Casey Kaplan in New York (until 29 February) is dominated by enormous sculptures that resemble maniacal chandeliers. (Holly Black) 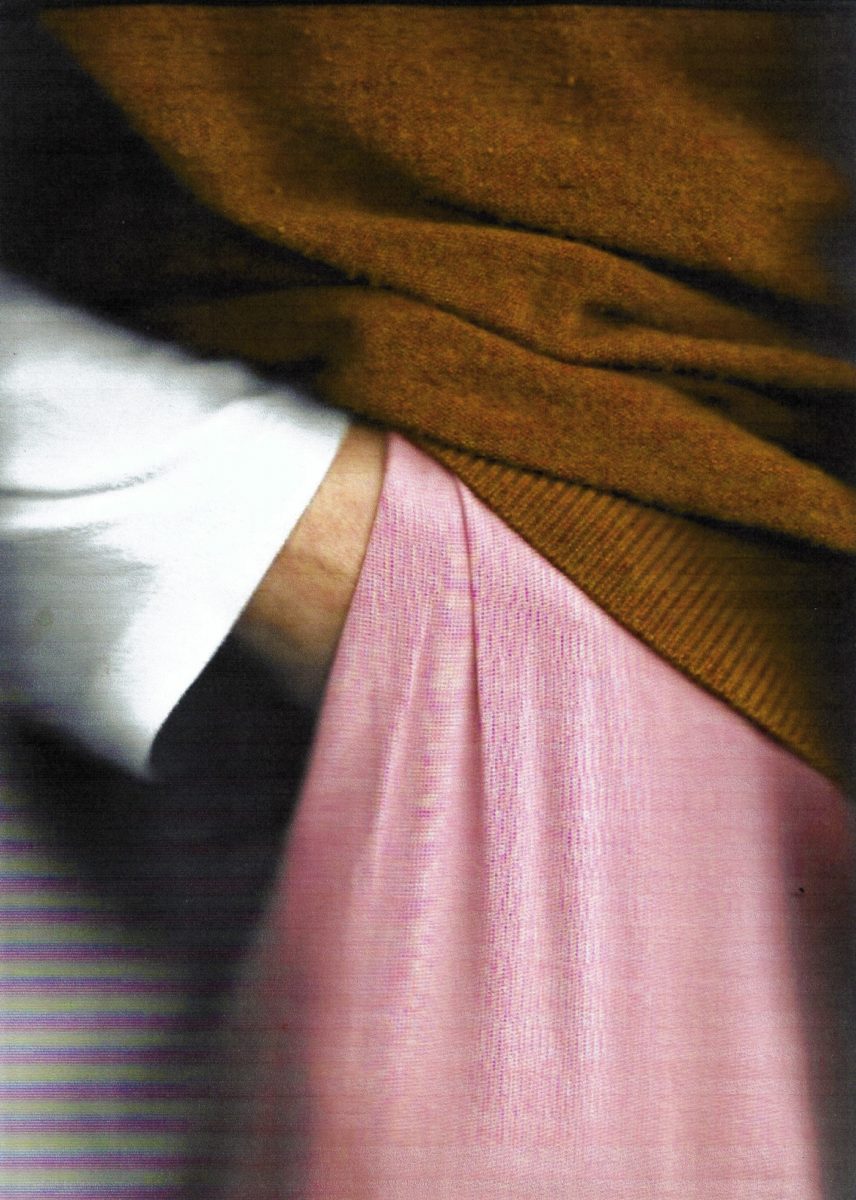 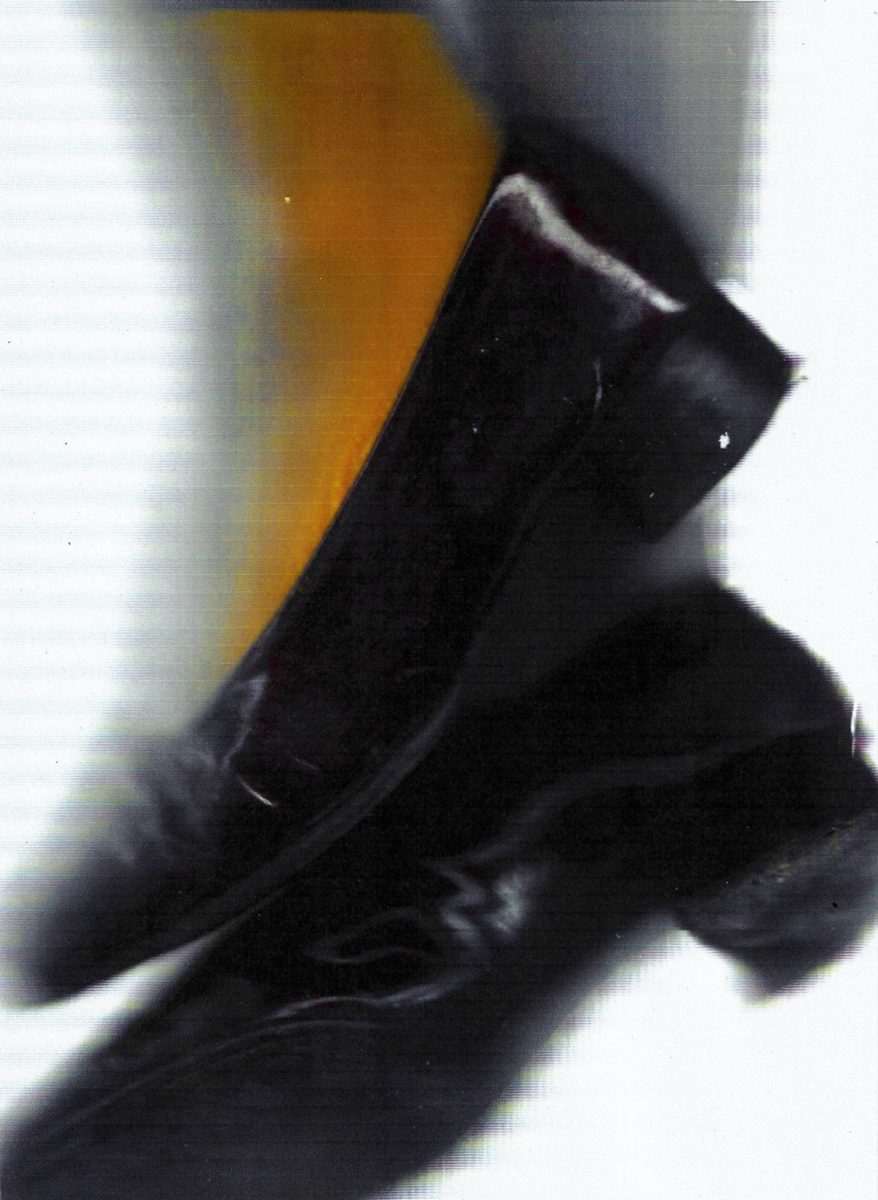 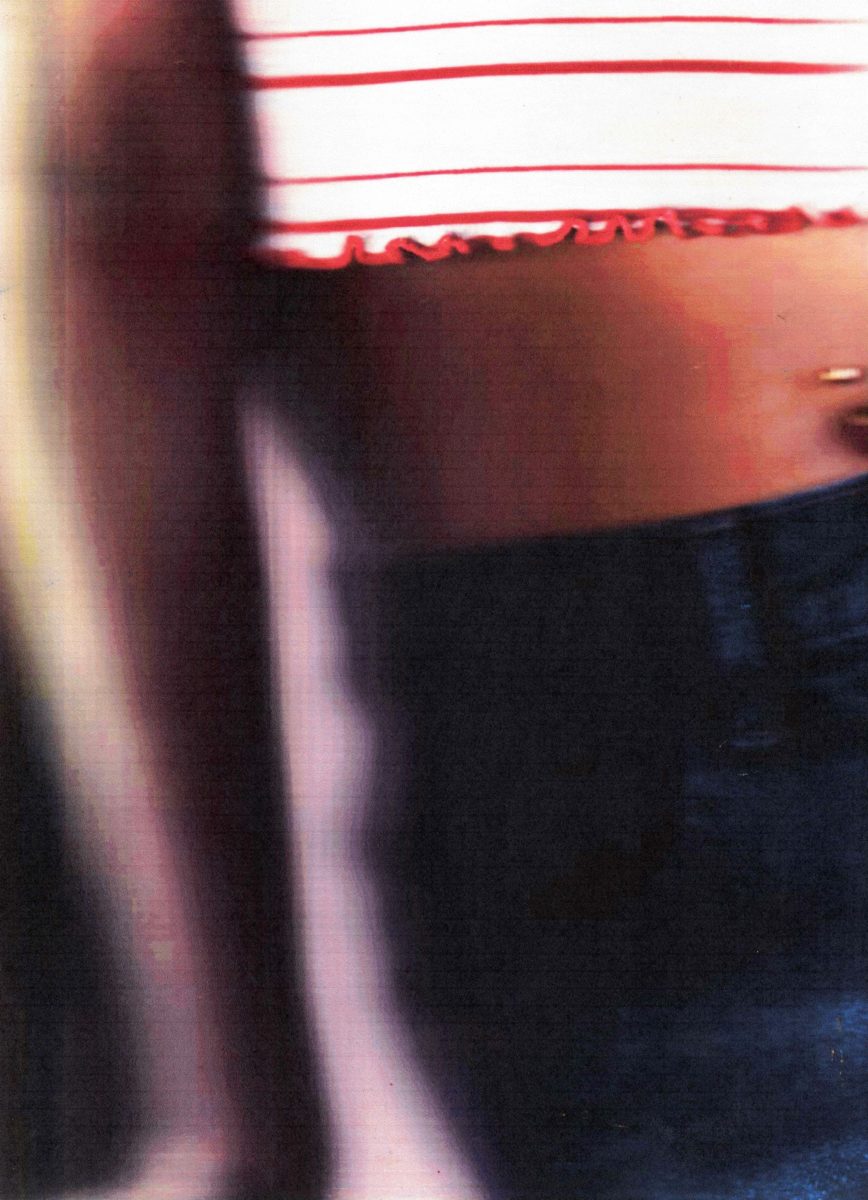 Joe Cruz is known for his striking, distinctive collage-based illustration work that merges photographic images with colourful hand-made gestures. They might look deceptively simple at first glance, but reveal a deeply sensitive handling of his materials and understanding of composition. Recently, however, he’s been exploring new ways of working. Towards the end of 2019, Cruz spent time documenting the artistic community in the Seven Sisters area of London through a series of portraits created using a domestic scanner—essentially “photocopying” his subjects to create a strange, abstract approach to portraiture. “For me, the intimacy of the scanner leads to quite beautiful, poised compositions and often with dramatic lighting conditions reminiscent of traditional oil painting techniques, but in my case representing contemporary life and its many characters,” says Cruz. (Emily Gosling)

The celebrated sculptor eighty-two-year-old Melvin Edwards is best known for his Lynch Fragments—spiky, ominous, heavy-looking things that use spikes, barbed wire, hammers and chains, amalgamous forms welded together from different collected materials. The Lynch Fragments began as a response to racial violence in the 1960s in the US, where Edwards has lived his whole life—recently also dividing his time between there and Dakar. Edwards is having his second solo show at London’s Stephen Friedman Gallery this month, with works from five decades of his extraordinary career presented seamlessly together. (Charlotte Jansen)

Based in Paris, video artist Anne-Charlotte Finel is currently exhibiting her work for the first time in the US at New York gallery The Chimney. Her solo show, Jacklighting (on show until 23 February), takes its title from the practice of hunting animals at night by shining bright lights into the darkness, revealing their eyes and in doing so temporarily blinding them into stunned stillness to make them easier to catch. The title aligns closely with the artist’s own work—though hers is less predatory (we’d hope): Finel uses video to capture and unveil the eerie shapes of space during “the witching hours” of dawn and dusk by illuminating them. For the artist, it’s these strange in-between times that hold the most mystery; sitting somewhere peculiar between night and day. (Emily Gosling) 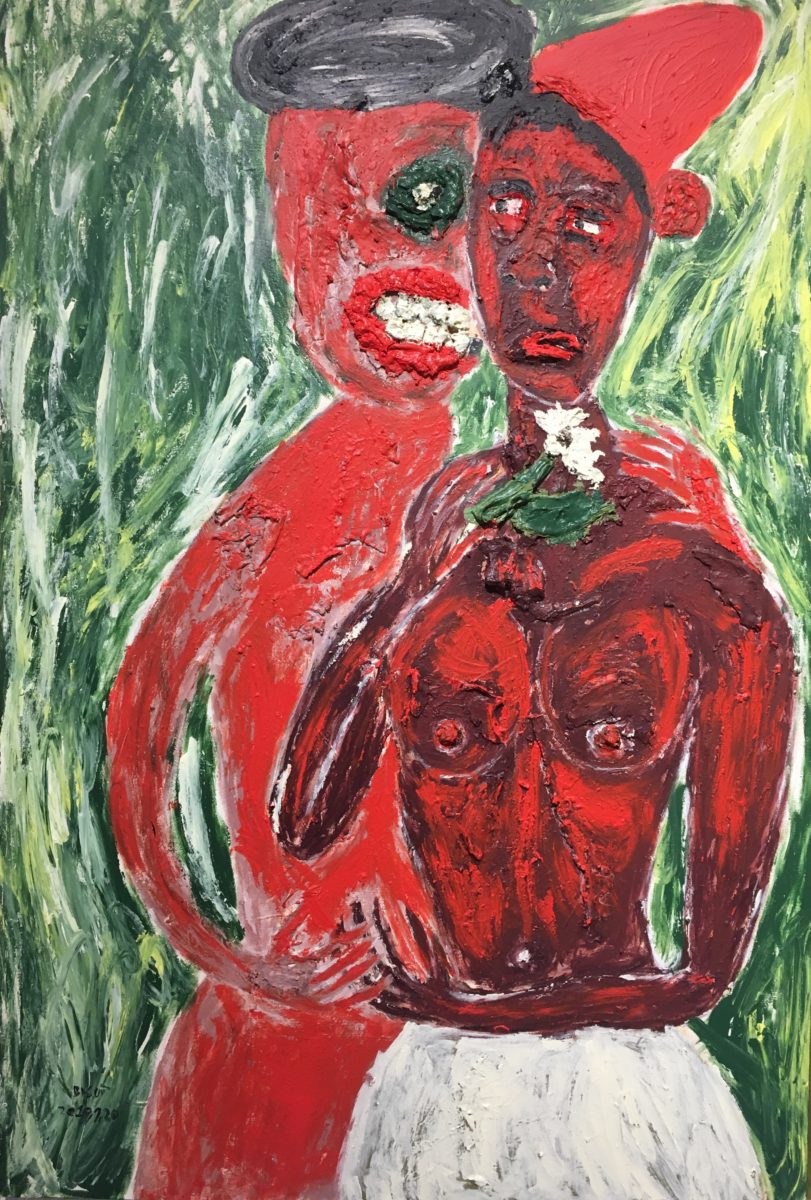 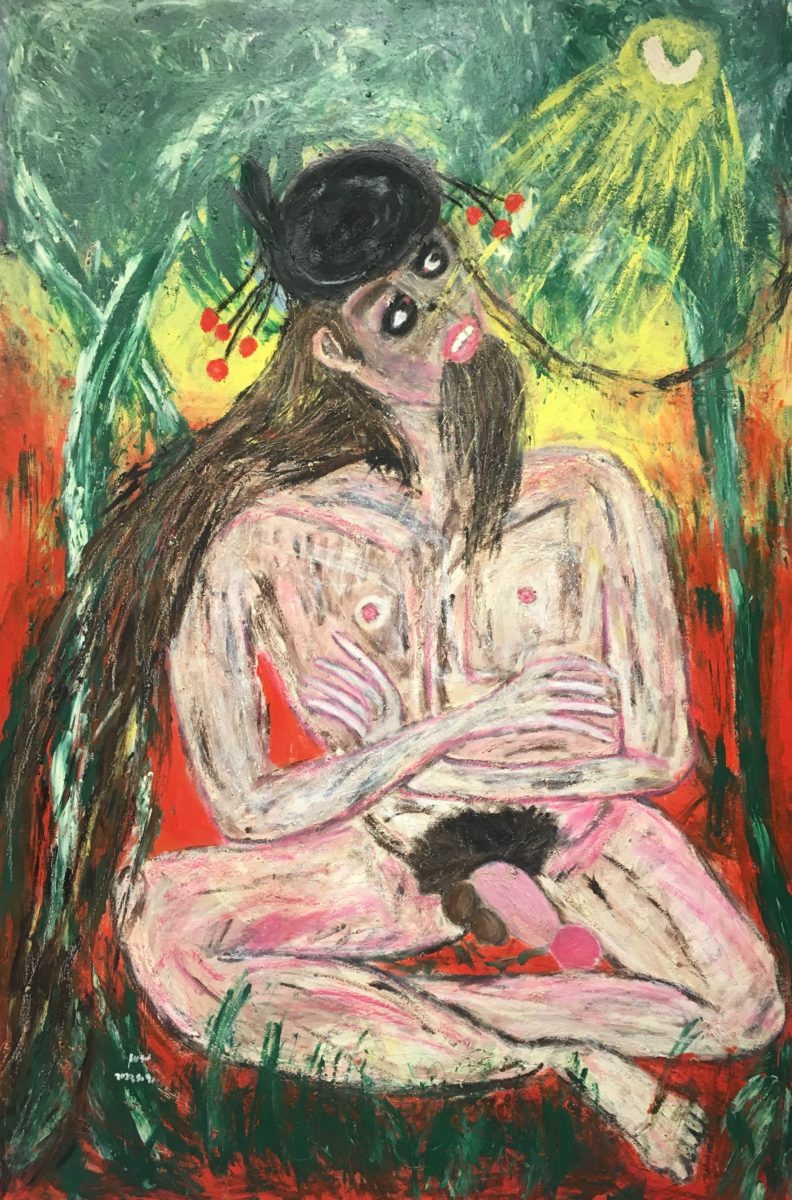 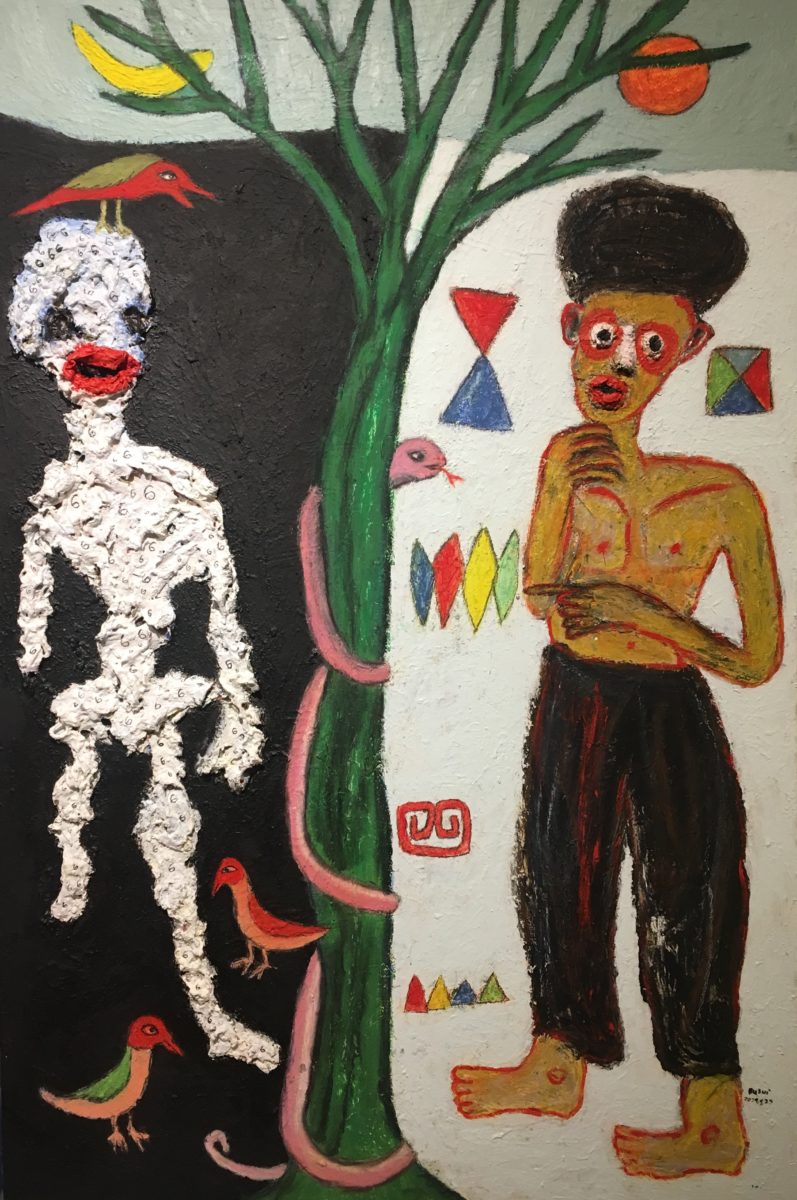 Based in Chiang Rai, Thailand, self-taught artist Busai Ajar was born in a remote mountainous region of Myanmar. Forced to flee as a young child with her family after a military invasion of their land, she explores these early experiences through self-portraits and imaginary landscapes, embracing her own identity as an Ahka woman. Her work often explores the dualities of pleasure and pain, joy and suffering and life and death, with a bold colour palette. She nods to personal tradition with her embrace of mythology and spiritualism, as seen in her current presentation at Singapore Biennale, which runs until 22 March, where a wooden spirit gate is combined with a series of paintings. (Louise Benson)

Jessica Stoller’s subversive ceramics combine sugary chintz with nudity, body hair, acne and exotic flora and fauna, provoking lust and revulsion in equal measure. She creates these strange hybrids to interrogate porcelain’s complex history, forcing us to question exactly why we find particular motifs and aesthetics beautiful or indeed grotesque. Stoller combines hand thrown, carved and moulded forms to produce her works, thereby alluding to the form’s accepted traditions, as well as building her own visual language. In her current exhibition Spread, at PPOW Gallery in New York (until 15 February) she presents busts and wall-based work alongside an epic tableau that enmeshes human limbs with carnivorous plants and vaginal flowers. (Holly Black)

Celeste Rapone’s subjects appear uncontainable. Their bodies are often presented in off-guard or casual poses, spilling towards the edges of the canvas; limbs appear to have been edited to squeeze within the set parameters of her paintings. Rapone’s colours are bold and confrontational, and occasional glows of light line exposed body parts. The above painting catches its subject in the inevitably awkward pose that public peeing calls for (at least for those who have to squat to do it). There is a raw vulnerability and loneliness in her works, which were first created as “coping mechanisms” for her future self as a failed painter. The American artist can be found at Josh Lilley in London at the end of the month alongside the works of Benedetto Pietromarchi in the newly extended gallery space. (Emily Steer)