Today, few gallery-goers would bat an eyelid at artworks created with virtual or augmented reality; or that use things like datasets and mix-and-match found sounds and footage as their primary tools or media. No longer are such technologies the preserve of gamers, tech-geeks or sci-fi movies—they have rapidly shifted into art world parlance.

This recent appreciation and acceptance of shiny new art forms parallels broader societal and social leanings: we fetishize youth—or its equivalent, which is cutting-edge tech like VR, in this instance—and simultaneously fawn over the retro. Youth is beauty, that’s the ongoing message; but something slightly older galvanizes a sense of nostalgia, especially if it correlates with a time that lies just on the cusp of what we are able to remember. “To understand where we are, we have to understand what’s happened before,” says Elizabeth Neilson, director of London’s Zabludowicz Collection. “And it’s easier to understand something [from] twenty years ago than 200 years ago.”

That nostalgia has manifested in a resurgence of a certain nineties Net Art aesthetic: the glitches and VHS-weathered look that was once simply a product of the artists’ available tools is now often painstakingly recreated to engender a sense of fondness for a bygone era, which predates today’s (mostly) slick, unseen digital machinations.

Anaïs Duplan, a poet, artist and the founding curator for the Iowa-based Center for Afrofuturist Studies, embraces that aesthetic. Having moved from text-based to what he terms “video poems” to explore poetry’s speed and duration to find “a more literal way of thinking about rhythm, what it means to hold a phrase or for a poem to be ‘slow’, using time-based media,” his work aims to “find the beauty in low res images”. This is partly active aesthetic choice, partly necessity, since much of his video uses archival public domain material and YouTube clips. Newer footage is often treated to give the lower-res, more pixelated feel of older clips for consistency.

Duplan’s interest feeds directly into explorations of the human behind the tech, and how (in)visible they can choose to be today. American Artist, for instance, uses digital art to delineate the lack of integration of artists of colour into the “American art canon” by deliberately using a name that’s nigh-on impossible to search online.

This also raises questions around the dissemination of video art today and in the future. Duplan cites artist Shawne Holloway, who creates much of her work solely for YouTube, and so bypasses the historical way video art had to go through distributors, galleries and archives. “I’m curious about how that sort of work will age and how artists use YouTube, as it’s already old at this point, but it’s also perpetually new as things feed into it,” says Duplan. “YouTube isn’t just about how people are seeing the work—it’s part of the work itself.”

The rapid developments in tech create ongoing issues around preserving, archiving and viewing art in future—an issue that Neilson knows only too well. When she joined Zabludowicz in 2005, she says she was handed a “massive box full of VHS and Betamax tapes”. The advice at the time was to transfer these artworks onto DigiBeta digital tape format, which feels laughably outdated just fifteen years on. Today, the collection’s digital artworks are mostly stored as MP4 files on its server and on hard drives, backed up in an offsite storage unit along with their physical counterparts (such as sculptures used to create installations) and tech specs. The collection also stockpiles hardware equipment used to show media-based artwork.The difficulties in preserving art made with tools that rapidly become obsolete has become all the more tricky given the Zabludowicz Collection’s fairly recent focus on VR—possibly the most rapidly developing media. Other format “trends” seem to come and go with breakneck speed (remember the 3D printing phase?), so why VR? “There’s an excitement in being involved in something that feels so new: it’s quite obvious that we’re not seeing where it’s going to go yet,” says Neilson.

She compares today’s VR with the difference between Eadweard Muybridge’s nineteenth-century photographic studies of motion and its later conclusion in cinema: “We can have these immersive technologies, but nobody has quite had the vision to know where it’s going to go. [Its evolution] is happening through the technology producers at the same time as the artists. The pieces that are really interesting are the ones that push the medium, rather than just offering ‘fun’ or ‘fantasy’ experiences.”

VR is not the only form that is challenging to preserve and re-present: the constant upgrades in playback and installation technology make video increasingly troublesome to recreate; and Net Art inherently has a shorter shelf life than most, as site domains lay dormant and eventually disappear, living on only as screenshots—if they’re lucky. Many of Cory Arcangel’s video game-based pieces, too, were initially designed to be played by viewers, but their future showings will likely be through films of the gameplay rather than the physical objects—they become artefacts and documentation. But as artists’ increasingly flexible approach to how their media-based art is shown proves, it’s not the tech, but the idea that’s at the heart of what makes a piece age well, whatever its technical specifications.

“Net Art inherently has a shorter shelf life than most, as site domains lay dormant and eventually disappear, living on only as screenshots—if they’re lucky”

One way some artists look to mitigate the possibility of pieces ageing or becoming obsolete is to create what appear to be complex tech-based works using thoroughly simple means. Luke Jerram, known most recently for his Museum of the Moon, has worked with tech-led, time-based sculpture and performance works since he graduated in 1997—before Raspberry Pi and the like existed to aid things like lighting control. Instead, he worked with what he had and the use of mechanical technology such as motors has meant that even pieces such as his degree show work, Retinal Memory Volume, easily toured in the same format for years.

The piece saw viewers sit on a chair in a dark room, focusing on a small red LED in front of them, with three flashes of light passing through a series of stencils every ten seconds. It uses the human eye’s optical phenomena of the afterimage—one that continues to appear in the eyes after a period of exposure to the original, creating illusory sculptures that the viewers “see” briefly. “Nothing really dates because it’s based on an optical image,” says Jerram.

Artist Laura Buckley is also keen to emphasize simplicity. She trained as a painter, but now “paints” with light, sound and moving image, to create installations alongside structural elements. Her practice is resolutely process-based and practical. “Analogue is very important to me: a term I use is subverting technology, so I push things beyond their design—that’s where the interesting stuff happens. A lot of things aren’t pre-planned,” she says. She has long experimented with scanners, for instance, corrupting and reconfiguring images to create new perspectives and push the functionality of this basic hardware.

Her work deliberately eschews slickness or an “overproduced” look; mitigating the potential of ageing through its simplicity. “It’s really important to me that everything is seen to be of the hand, so it’s demystified and reveals the technicality behind it,” Buckley explains. “When you’re not keeping things from people it’s more relatable. I like the connection and intimacy it makes between viewer and maker when you show how things are done. There’s an honesty to it.”

By even discussing the notion of how to ensure the longevity of digital art, there’s an inherent suggestion that art should be preserved—that age-old idea that making art is a form of ensuring a legacy of sorts. However, some artists flip that idea on its head; instead seeing their work as temporal, rather than something that will live on long after they will.

Sofie Alsbo creates sound and video installations usually composed from fragments of collected, recorded and animated materials. She says that her recent focus on purely sound-based work lies in exploring “the fallacy that digital art can never be a ‘finished thing’ like a painting can—that when you take it down it doesn’t exist anymore”. This has led her to take certain elements of previous pieces and reconfigure them into new ones, tweaking the edit and setup and even the title “in the same way you’d see a performance piece”. She adds, “It will be different every time you show it—a living organism that can develop over time.” Alsbo goes on to explain that she is “not bothered” about the idea of artistic legacy: “That’s why sound feels like such a relevant medium—it’s so intangible in how it works with a space. It’s more about the experience and the way we interact with the work right now, and the uncertainty of the future.”

The nature of tech-based art as a living organism ties in with Buckley’s relationship to age in her artwork’s sometime subjects too; her children. She was pregnant with her first child while studying for her masters in London, and it was only after becoming a parent that she began working in film: “It opened my practice so much, and really freed me,” she says. While her children don’t directly appear in her work visually, snippets of their voices or sounds they’ve made using instruments all mix into the broader soup of her mélange of sound and moving image.

Buckley’s capabilities with digital technology, not to mention her ideas around the possibilities of the form, are both sanguine and genuinely creative. Digital tools are a means, not an end. They are part of a wider-reaching conceptual starting point. “With Final Cut or any other programme, you have to keep constantly relearning them [as they update],” she explains. “But there’s something interesting in what happens when you can’t quite understand them—I like not reading the manual.”

“In some ways, tech signals the future, but it becomes outdated so quickly,” Duplan points out. While we can’t predict where tech will head—or indeed, the best way to maintain or archive it—the solution to preserving any work of art is to ensure that the message is prioritized over the medium. Great concepts, however they’re presented, don’t age. “The most valuable part is the idea behind it,” says Nielsen. Jerram agrees, “The simpler the idea the better. I try to make art that won’t date—that will still be interesting in 100 years’ time. The tech you use should always be secondary to the experience.” 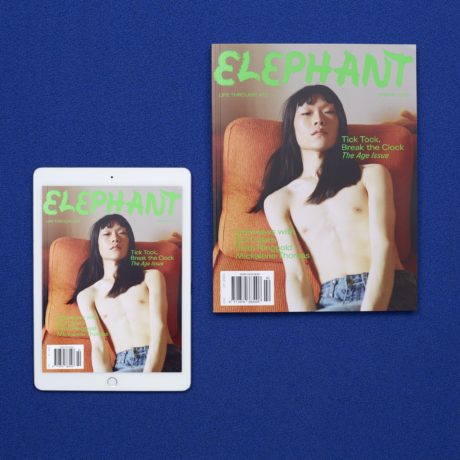